ON FILM: More picks from the movie-bit 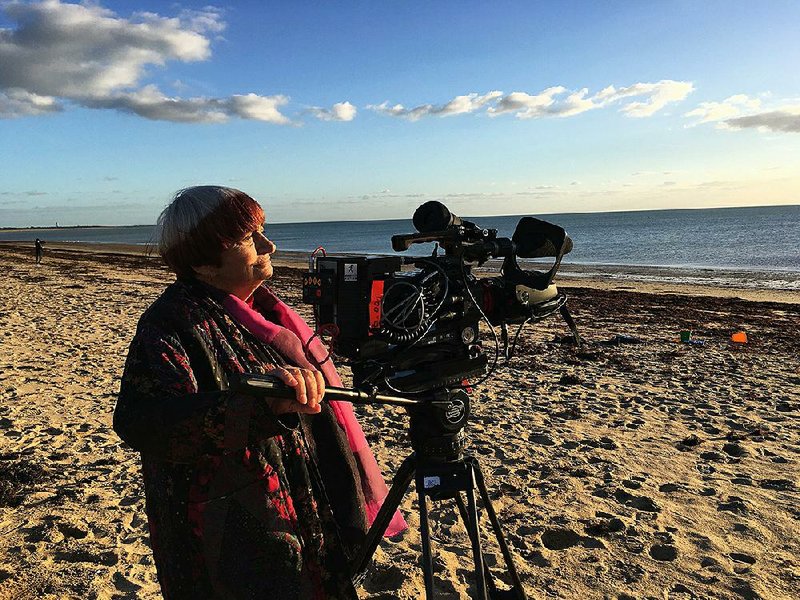 As is our custom, we start off the year by checking in with a few heavily invested moviegoers/critics for their thoughts on the past year's best. And then we run them with a minimum of editing. Here's this week's batch -- expect one more go 'round next week.

Last year sped by -- too jam-packed for much reflection, and the end of year has come way to fast. 2019 did not allow nearly enough room for my love of watching films -- and of the films I managed to see, less than 10 rose clearly to the top for me, less of a comment on the films of this year than of my singular job focus. In the interest of time with my holiday prep, this hastily-assembled top five accompanied by a holiday-watching wish list is as close as I can come to a top 10.

For Sama, directed by Waad al-Kateab:

This riveting first-person documentary from the perspective of a young Syrian mother rocked me to the core. The "Sama" of the title is the baby daughter of filmmaker Waad and her doctor husband, Edward Watts. Working side by side in East Aleppo, Waad and Watts met and fell in love, and with Watts being one of the few remaining doctors in the war-torn city and committed to the cause, Sama is born and grows as the bombs fall around them. Sama's very existence forms the emotional center of the story, with the film serving ultimately as a future explanation to the little girl on her early years. For Sama often makes you want to close your eyes but Waad's honesty is a challenge to keep them open. Watch it when you're feeling strong -- but definitely watch it. Pleased to see this PBS Frontline film on the Oscar shortlist for Best Documentary.

It's possible to wrap thoughts on this film up into a neat little package. Peterloo is a masterful film but is not a film for anyone who needs rapid pacing and a driving narrative. Beginning with the desperation of an exhausted young bugler at the end of the Battle of Waterloo and ending with a little-known massacre at St. Peter's Field near Manchester, it demands attention to detail with its massive historical canvas. The story is simple: Some are on the side of reform while others are against it, a predicament we are all familiar with. Multi-Oscar-nominated filmmaker Mike Leigh has been known for his powerful character-driving domestic dramas but with Mr. Turner and this current film, he is telling stories of a larger scale. Within Peterloo's clear framework is a "Dickensian" cast of characters, every one memorable -- and enough themes that resonate today to give plenty to think about. Ultimately, if I had to name one theme that rises to the top of this epic, I suppose it would be that words mean something. Words count.

This raw and personal documentary explores the elements in China's past that led to the creation of the "One-Child Policy." The film is part investigative journalism, part memoir -- and what made it work for me was filmmaker Wang's exploration of her own family background and connection to the destructive policy.

Authentic and astute with compelling performances by Scarlett Johansson and Adam Driver.

Maiden, Alex Holmes: The empowering story of the first all-female team in the Whitbread Round the World Yacht Race. Back in 1989, the male-dominated world of boat racing was generally gobsmacked by the audacity of these "girls" who not only finished the difficult nine-month race but won two legs of it. That showed 'em!

The films that my crystal ball tells me I will love when I see them:

Little Women, Greta Gerwig: What could there possibly be not to love about this film?

Once Upon a Time... in Hollywood, Quentin Tarantino: I am not by nature a Tarantino fan for any number of reasons, but I have been told by those I trust that I will love this one in spite of myself.

Honey Boy, Alma Har'el: My daughter India tells me it's one of the best films she's ever seen -- and that's enough for me. I like her taste in films.

I didn't see many films in a theater last year, therefore my list is rather brief and not in order of excellence. (I can count The Irishman, The Laundromat, Marriage Story and Linda Ronstadt: The Sound of My Voice as they were released in a theater somewhere.)

1. Once Upon a Time... in Hollywood was so good I saw it twice. I hope Tarantino comes up with an extended version that includes the trip to Italy and the four films made there. DiCaprio, Pitt and especially Margot Robbie are very appealing. If only life imitated art.

2. Ford v Ferrari is much more than a racing movie. The two leads (Matt Damon and Christian Bale) are phenomenal as well as the supporting cast of Ford and Ferrari toadies. I learned a lot about the 24 Hours of Le Mans.

3. The Irishman has the dream casting of De Niro, Pesci and Pacino. Much more than a mob drama, this film explores the motives and decisions we make that shape our lives, for better or worse.

4. Marriage Story is a lacerating account of the dissolution of a marriage. Adam Driver and Scarlett Johansson are heartbreaking.

5. The Laundromat is presented in similar fashion to The Big Short, whereby characters break the fourth wall regarding one topic, in this case, shell companies. Several stories entwine to offer us a primer on greed and how easily some people get away with it -- much of it due to our tax laws. Meryl Streep leads a fine cast, including Antonio Banderas and Gary Oldman as a sort of Greek Chorus. Hilarious and tragic at the same time.

6. Knives Out is a wickedly witty whodunit that had me guessing from beginning to end. And I didn't figure it out until the denouement. Rare in this day and age, I would say. The cast is perfect with Daniel Craig doing his best southern drawl. Ana de Armas is excellent and Christopher Plummer proves once again how good an actor he is.

7. Where'd You Go, Bernadette is a strange but ultimately satisfying comedy/drama about a dysfunctional woman and her family. Chameleon Cate Blanchett is perfect as Bernadette, who ends up at the South Pole of all places.

8. Judy is a bio-pic of sorts about the last days of Judy Garland, who was struggling to keep her family intact and her career afloat. Renee Zellweger IS Judy.

9. Linda Ronstadt: The Sound of My Voice is an excellent documentary on one of the finest singers of the late 20th century.

Here are my Top 10 in no particular order. If I made the deadline, and you want to tag me with a quote, it would be -- "WTF do I know."

1. A Hidden Life, Terrence Malick: IMHO, it's Terry's masterpiece. It's the best of Tree of Life, Days of Heaven and The Thin Red Line all rolled into one beautiful 3-hour meditation on resistance and defiance of a dictatorship. If he meant it as a metaphor for our current nightmare, good on him. If he didn't, it still works as one. I was mesmerized from beginning to end and was heartbroken by Bruno Ganz in one of his last performances.

2. 1917, Sam Mendes: An exciting experiment in cinematic virtual reality, with somber resonance regarding the futility of war.

3. The Irishman, Martin Scorsese: Another cumulative work by a master filmmaker. Maybe not as kinetic as Goodfellas or Taxi Driver, or as artful as Raging Bull, but still one of his best.

5. Jojo Rabbit, Taika Waititi: I have been a fan since his early New Zealand comedies, but this film takes his work to another level. Inventive and resonant.

6. Ford v Ferrari, James Mangold. A surprise for me as I did not have a lot of expectations for it. Entirely entertaining with great performances and technical innovations.

9. Pain and Glory, Pedro Almodóvar: A sad/funny reflection on the actor/director relationship.

10. Marriage Story, Noah Baumbach: Deeply affecting, and yet funny, cut to the bone look at a breakup/makeup of a marriage.

Also favorites: The Last Black Man in San Francisco, Once Upon a Time... in Hollywood, Apollo 11, Blinded By the Light, Dolemite Is My Name, Uncut Gems, The Farewell, Rolling Thunder Revue: A Bob Dylan Story by Martin Scorsese, Booksmart, Little Women, Two Popes

2019 was a year of self-exploration, reflection and extreme moments of intensity. It's a year that I pushed myself to my limits, in my professional, creative and personal life, specifically in producing and directing short films. I produced a film in France. Another in Italy. I directed a film in a small apartment in Bushwick, Brooklyn, with an actress from Arkansas. I entered my second year of grad school at New York University's Graduate Film program. I wrote, scouted, and prepped my next film that I'm shooting in Arkansas [this month]. I pitched that film at the New Orleans Film Festival. I attended the excellent Hot Springs Documentary Film Festival. And, best of all, I saw some amazing films.

2019 felt like a sleeper year, a year full of films that will be quiet burns. Films that you will see down the road and feel like a hole in you somewhere has been filled after you've seen it.

The films I have chosen from 2019 repaired parts of me that I didn't know needed repairing. This year felt like a year of true creation -- and quiet filmmaking. Filmmaking that made me lean forward and study; and after I walked out of the theater emotional and excited.

I haven't seen as much as I would have liked to last year. I have not seen The Portrait of a Lady on Fire, The Lighthouse, Parasite, Jojo Rabbit, Little Women or Uncut Gems, among others. A lot of the films I saw this year were on planes. So in creating a top list of the year, I hesitate.

Instead, here are a collection of films that made me feel something deeply, at my core, and shook me. These films had an impact on me as a person and as a filmmaker ....

2. High Life, Claire Denis: I saw this alone at the Angelika in New York City at a 10:45 p.m. screening. When I walked out it was raining. Pure bliss.

4. Judy, Rupert Goold: Despite my problems with the film, Zellweger's performance is extraordinary and made my jaw drop to the floor.

5. Hustlers, Lorene Scafaria: I haven't had that much fun watching a film in a very, very long time. The acting is sublime.

6. The Irishman: I'm still a sucker for this Mean Streets boy and Scorsese's American Cinematic Storytelling.

7. Lark, Angel Olsen: I'm including a music video on this list because Angel Olsen's music mixed with Ashley Connor's photography moved me deeply.

8. Climax, Gaspar Noé: I have never physically dry-heaved from a film. And anything that elicits that type of visceral physical response from me deserves a spot on my list.

10. Mark Thiedeman's forthcoming: As much as anything I've seen this year, from scripts to rough cuts to trailers, this fine filmmaker working in Arkansas makes me very, very excited. Part of working and making art in the South is supporting and collaborating with like-minded artists making beautiful and distinct work. And something I'm so fortunate to have found that in Thiedeman. I'm so excited about what 2020 brings and what work he releases into the world.

Print Headline: ON FILM: More picks from the movie-bit