When Rabbi Barry Block first learned about the Jewish spiritual practice of Mussar nine years ago, he hadn't studied the ethical discipline in rabbinical school but was determined to teach an adult class on it in preparation for a talk by Dr. Alan Morinis, the modern-day authority on Mussar.

The study of Mussar, Block said, involves examining one's life through the lens of middot, or soul-traits, such as humility, patience, anger or honor.

When Morinis told the rabbi that before teaching Mussar he would first be required to complete coursework and training, Block -- who expected to teach from books on the subject -- felt taken aback before summoning large amounts of two soul-traits -- patience and humility -- in agreeing to the instruction.

Block, who has led Little Rock's Congregation B'nai Israel since 2013, tells that anecdote by way of introduction to the book The Mussar Torah Commentary: A Spiritual Path to Living a Meaningful and Ethical Life, for which Block served as editor and contributor. Retired Arkansas Supreme Court Judge Annabelle Amber Tuck, a member of B'nai Israel, also contributed to the book.

Block and Tuck will discuss the book at Congregation B'nai Israel at 4 p.m. Sunday. Dr. Carmen Arick, a past president of the congregation, will moderate the panel discussion.

Released in November, the book was published by the Central Conference of American Rabbis, the oldest organization for Reform Judaism in the United States, Block has called the collection of essays a "road map to holiness" and the contributing writers "your guides on a journey to ethical Jewish living in the 21st century."

"The idea for The Mussar Torah Commentary was to say, 'What would happen if we looked at each weekly Torah portion, and see how that portion can be viewed through the lens of a given soul-trait?' " Block said. "How might we examine humility when you're looking at the very first portion of the Torah?"

Mussar's origins are found in the 10th century. The larger Mussar movement took off during the 19th century, but many teachers of the discipline were decimated in the Holocaust, Tuck said.

Many of the texts used in 19th century Mussar teaching were not written in a way that made sense to today's readers, Block said. The need to provide commentary by contemporary, relatable and inspiring authors, he said, also factored into the book's creation.

The book features 54 essays -- one for each Torah portion -- from a wide range of Jewish authorities, men and women of a variety of ages and experience levels. There are newly ordained clergy and retired clergy in the mix, Block said, and a majority of the contributors are women, including Amy Eilberg, the first woman ordained in the faith's Conservative Movement.

"History is often too much the record of what men in the story were doing," Block said. "Bringing women's voices into the discussion brings a fuller human experience to the text."

Block's essay examines Genesis 37:1-40:23, concerning Joseph's and his brothers' behavior toward one another, through the soul-trait of rachamim, or compassion. Tuck writes about the establishment of society with justice as a guiding principle, taking a look at those laid out in Deuteronomy 16:18-21:9.

Tuck said she has long been drawn to meditation, and remembers taking individual retreats at St. Scholastica in Fort Smith, home to the Catholic Benedictine sisters, while a chancery and probate judge in the late 1980s. At the time she didn't know about Mussar, and hadn't found a form of meditation in Judaism, but sought personal growth and a way to maintain objectivity on the bench.

Years later, Block brought Morinis, author of the book's foreword, to B'nai Israel to speak, and Block later facilitated a semester of Mussar in which readings were accompanied by the Torah or other texts, along with meditating and journaling about a specific soul-trait -- engaging in tikkun middot, or soul-trait repair.

One middot that was a struggle for Tuck was bitachon, or trust.

"I've been in the world making things work, solving problems, getting things done. But how do I step back and allow existence to be?" Tuck said. "I need[ed] to understand there are limits, and the issue of always being in control is not balanced. So you work at that in segments, and what you do is each day you journal about how you did that day with that particular trait. You meditate. Sometimes I have mantras I use.

"It just helps me bring that into my center as a core principle, so that when things go off the rails, which they're going to do, that I'm not doing what happens [these days] all over the place, which is lose it."

Among other activities, since being introduced to Mussar, Tuck is now a board member of the Mussar Institute in Canada, which Morinis founded in 2004.

Tuck emphasized the usefulness of Mussar for a person of any or no faith, in the development, tempering or balancing of soul-traits.

"Even though it comes from a Jewish perspective it's almost universal, no matter what religion [you follow]," Tuck said. "In Judaism, it's not about going off on a mountain and sitting on that mountain; it's about operating in the world." 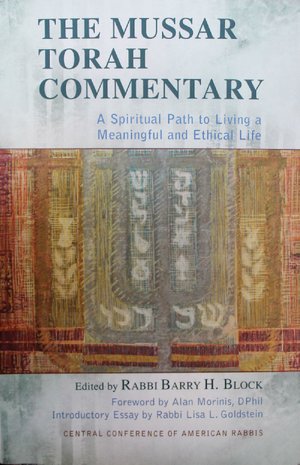