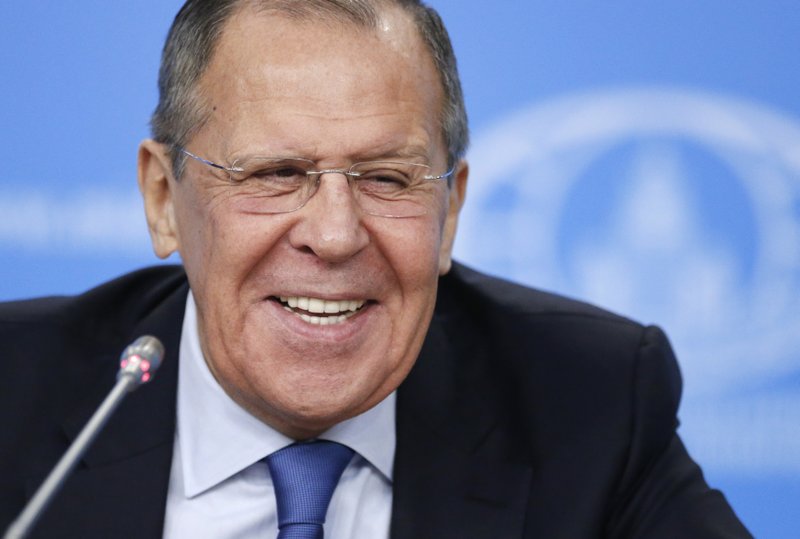 Sergey Lavrov, who serves as acting foreign minister in the wake of Wednesday's resignation of the Russian Cabinet, said this week's meeting of top U.S. and Russian diplomats on strategic stability didn't achieve any immediate results, adding that "dialogue is continuing."

Russia-U.S. relations have been at post-Cold War lows since Moscow's 2014 annexation of Ukraine's Crimea.

Speaking at an annual news conference, Lavrov said that the U.S. has stonewalled Russia's push for extending the New Start nuclear arms treaty that expires in 2021. The agreement is the last U.S.-Russian arms control deal still in place, and Moscow has argued that its demise will remove the final barrier stemming an arms race.

"We will act strongly to avoid depriving the world of agreements that control and limit nuclear weapons," said Lavrov, who was appointed foreign minister in 2004.

"We stand for the extension of the New Start treaty without any preconditions," he said. "I hope that the Americans hear us, but we haven't received any coherent signals from them."

President Donald Trump's administration has pushed for China to join nuclear arms cuts, but Lavrov described the idea as unrealistic. He pointed at Beijing's refusal to discuss reductions in its nuclear arsenal, which is much smaller than those of the U.S. or Russia.

Turning to other issues, Lavrov criticized Britain, France and Germany for caving in to pressure from the U.S. over a nuclear deal with Iran.

Earlier this week, the three countries reluctantly triggered the accord's dispute mechanism to force Iran into discussions over its violations, starting the clock on a process that could result in the "snapback" of U.N. and EU sanctions on Iran.

The three nations are being pressed on one side by Trump to abandon the agreement like he did unilaterally in 2018, and on the other side by Iran to provide enough economic incentives for it to continue honoring the deal.

Lavrov noted that the European Union boasted about creating a mechanism for trade with Iran bypassing U.S. sanctions, but never put it into action.

He described the move by Britain, France and Germany as a "dangerous turn," arguing that the three nations used the moment of heightened tensions between the U.S. and Iran to "blame Iran for all what happened."

Following the U.S. drone strike that killed Revolutionary Guard Gen. Qassem Soleimani, Iran announced what it said was its fifth and final step in dropping its commitments under the 2015 deal. Iran said it would no longer abide by any limitations to its enrichment activities.

Turning to Libya, Lavrov said he expects the warring parties in the North African nation to observe a lasting cease-fire after their talks in the Russian capital earlier this week.

He explained that the talks in Moscow between Libya's rival leaders focused on a document spelling out conditions of a cease-fire that could serve as a basis for Sunday's Libya talks hosted by Germany.

Lavrov said he plans to attend the talks in Berlin, which will be attended by both Fayez Sarraj, the head of Libya's U.N.-recognized government in Tripoli, and his rival, Gen. Khalifa Hifter.