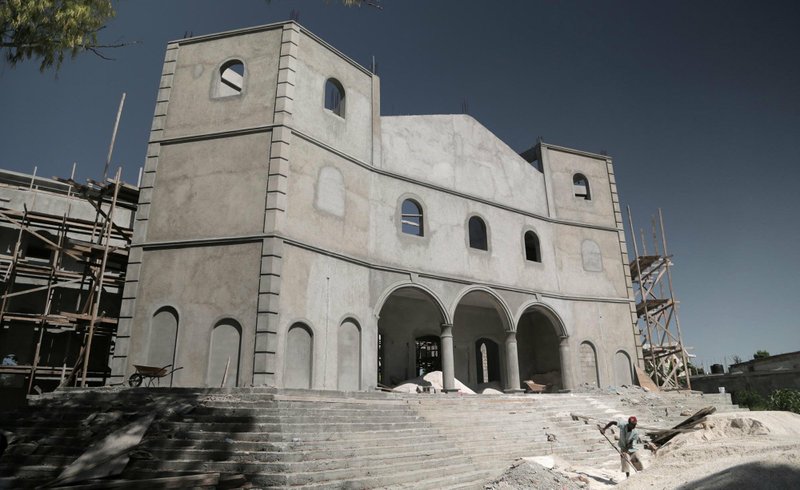 The Cathedral in Port-au-Prince, Haiti, remains in ruins 10 years after the earthquake. Protracted political turmoil plus growing insecurity and a collapsing economy have affected every aspect of rebuilding after the 2010 natural disaster, from the cost and availability of construction materials to workers’ ability to get to their job sites.

PORT-AU-PRINCE, Haiti -- The imposing concrete facade of St. Gerard Catholic Church sits on top of a steep hill in the historic Carrefour-Feuilles neighborhood overlooking the Haitian capital, its unfinished bell tower rising toward the heavens, its uncovered dome roof partially obscured from view by royal poincianas not yet in bloom.

Construction came to a grinding halt three months ago. Containers carrying the metal roof, light fixtures and floor tiles, all shipped in from Spain, have been stuck at Haiti's main seaport, with government workers nowhere to be found to sign off on their release.

Meanwhile, more than two dozen equipment operators, painters and skilled laborers have been unable to work at the church. A protracted political stalemate between Haitian President Jovenel Moïse and large swaths of Haitian society has brought everything to a standstill.

"Every morning, we look at the situation in the streets and we have to decide: 'Can we work or can we not work?'" said Patrice Weil, whose Gateway Office Park construction firm is rebuilding St. Gerard and the destroyed cathedral in the southeastern port city of Jacmel from the ground up.

One of Haiti's largest and hardest hit institutions in the Jan. 12, 2010, earthquake, the Catholic Church was brought to its knees 10 years ago this month when the massive quake caused an estimated $200 million worth of damage to church buildings in this predominantly Catholic nation.

About 250 structures spread across 70 sites in three of the country's 10 dioceses were damaged or destroyed, while clergy, lay and religious leaders, including the archbishop of Port-au-Prince, Joseph Serge Miot, were among the dead.

But where foreign and Haitian governments have struggled to make progress after the quake, the Catholic Church has been largely successful, even if its reconstruction efforts did get off to a slow start. And its problems are emblematic of all that has ailed Haiti's decade of aftershocks: paralysis of redevelopment, ineffectual government and waning interest from foreign donors who once rushed to donate financial and humanitarian aid.

"Few organizations in Haiti today can claim to have reconstructed over 30 significant buildings to international seismic construction norms with all the funds accounted for, and externally audited with no significant findings," said Jacques Liautaud, an engineer who represents the United States Conference of Catholic Bishops' Latin American program, the largest single donor to Haiti's Catholic Church reconstruction efforts.

"Few have also taken the time and effort to work collaboratively within local institutions as we have," he said.

Like most international organizations after the earthquake, Catholic groups found themselves trying to do the same things: provide humanitarian relief, assess damage to structures and plan reconstruction. But the initiatives lacked coordination, and Catholic leaders quickly realized that many of the structures fell in the quake because they had been poorly constructed, Liautaud said.

A special collection for Haiti by the U.S. Conference of Catholic Bishops raised $100 million, of which $33 million was designated for church reconstruction, while the rest went to support the new humanitarian crisis. In addition to claiming 316,000 lives, the quake left 1.5 million people homeless and an equal number injured.

"We were confronted with a new reality," said Monsignor Launay Saturné, president of the Catholic Bishops' Conference of Haiti and archbishop of Cap-Haitien, which was spared from the devastation. "It was a reality that brought tears, a reality that caused people's hearts to bleed; it was an unprecedented reality because we were not prepared."

Faced with the huge task of rebuilding, Haiti's Catholic bishops, along with leaders from the Vatican and from sister churches in Germany, France and the United States, met in Miami in September 2010 and created the Partnership for Church Reconstruction in Haiti.

The partnership's main role was to ensure that the money raised built the maximum number of churches and related buildings possible from a priority list assembled by the bishops. It also had to provide accountability and ensure that all the new and rebuilt construction respects international earthquake and hurricane building standards, even though Haiti's Parliament still has not voted the codes into law.

"If I had to say what this program represents in terms of what's been rebuilt, it represents between 70% and 80% of the funds for the reconstruction within the Catholic Church," said Stephan Destin, executive director of the partnership, which has disbursed about $28 million since 2011, and built 43 structures to date.

Destin and others say they are satisfied with the work so far, but not the pace.

In addition to common Haitian problems like determining the validity of land titles and dealing with false land claims, the effort also has been bogged down by disagreements over architectural design, budget problems and internal strife.

The biggest obstacle in the Church-led reconstruction program, he said, has been Haiti's decade of instability -- and now what Haitians call peyi lock, the countrywide paralysis that has locked the country down.

The protracted political turmoil plus growing insecurity and a collapsing economy have affected everything from the cost and availability of construction materials to workers' ability to get to their job sites.

In September, just before a weekslong fuel shortage evolved into the third nationwide lockdown and the longest sustained wave of violent protests during President Moïse's tenure, Destin was trying to figure out how to get construction going again at 13 work sites around the country.

Since then, a countrywide cement shortage delayed construction; armed gangs threatened workers; and not one, but at least three, extended Haiti-wide lockdowns starting in July 2018 stopped the building process.

"We've lost at least four to five months of work," Weil said in October, before the third and longest lockdown crept into November.

In deeply religious Haiti, there is a strong bond between Haitians and their religious institutions. Even in its current state, St. Gerard generates a certain excitement as locals, traveling the hilly cobblestone pathway, look up to check on the progress of the exposed concrete, round columns and arch openings.

With so many structures to rebuild, bishops and local church leaders have had to make some tough decisions on what gets rebuilt and what doesn't.

For example, the Port-au-Prince Cathedral, also known as Cathédrale Notre-Dame de l'Assomption, did not make the cut because its estimated $50 million reconstruction costs far exceed the money that was available.

Also not among the projects: the Notre Dame Grand Seminary, which collapsed and requires $9 million for reconstruction.

One church that is being rebuilt, though not by the partnership, is the new Notre-Dame du Perpétuel-Secours in Delmas' Fragneauville neighborhood. The massive three-story church, dedicated to Our Lady of Perpetual Help, the patron saint of Haiti, is built in a neoclassical architecture style with columns and a gigantic round dome with a cross on top.

At the time of the quake, the church operated out of a house that fell, said the Rev. Jean Jacques Frederic, who founded the parish and church in 2005. Frederic said he asked the partnership to include the church's construction in its program, but was turned down.

Today, he prides himself on the fact that all of the $1.5 million poured into the new structure so far has come from parishioners and the local Haitian economy. The construction, which began three years ago and is ongoing, is an example, he said, of what Haitians can do for themselves without outside help.

"We are always saying that others have to do for us, as if we can't do for ourselves," Frederic said, standing inside the church's interior where a small team of workers was plastering the walls. "We can rebuild our own country."

With funds still needed for the church's metal roofing, stained glass, altar and the painting of its exterior and interior, Frederic said he can't estimate a completion date. But it will be completed, he said.

The idea of Haitians contributing to their own rebuilding isn't unique to Notre-Dame du Perpétuel Secours. Saturné, the head of the bishops' conference, said parishioners have contributed to the reconstruction of their churches by either financing amenities or fundraising to complete the final phases of a sanctuary.

Petionville's Sainte Therese Catholic Church, for example, spent more than two years after the structure was rebuilt without an interior ceiling or stained glass windows until the church finally installed them a few months ago, courtesy of the parish.

Destin said if there is a lesson he has learned from the rebuilding process, it's that Haitians are very attached to their houses of worship. 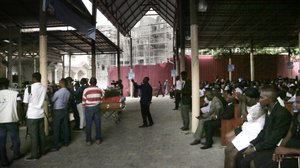 Photo by Miami Herald/TNS/Jose A. Iglesias
People pray inside Sacred Heart Catholic Church in Port-au-Prince, Haiti, during a funeral for five people killed during anti-government protests in Haiti. 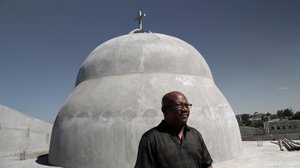