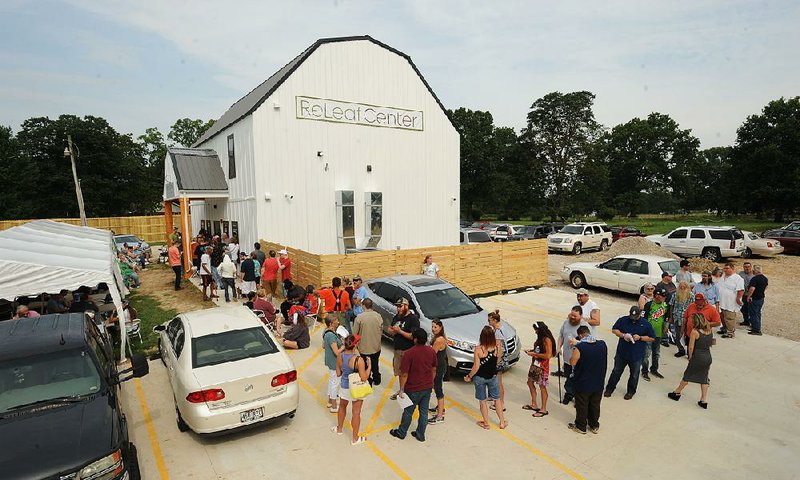 NWA Democrat-Gazette/ANDY SHUPE A long line forms Wednesday, Aug. 7, 2019, during the first day of operations for The ReLeaf Center, a medical marijuana dispensary located at 9400 E. McNelly Rd. in Bentonville, the first of its kind in Northwest Arkansas.

Frustrated with the slow rollout of Arkansas' medical-marijuana industry, the state's licensing panel is putting cannabis companies on the clock: Open to the public in the next few months or be prepared to face questions.

The Arkansas Medical Marijuana Commission is preparing to meet with all 32 dispensary operators and all five growing companies to determine if their licenses should be renewed for another year.

Sixteen dispensaries remain unopened a year after the first licenses were issued, and several have yet to even break ground. Commissioners hinted last week that companies that haven't opened or begun making progress could lose their licenses.

"My frustration is we want everything open, but we also want everyone to have a fair shot at this," he said last week. "When we've gone and spent the time, money and resources of the state to pick people and they've represented to us -- assumingly it's a good-faith representation -- here's the timeline. Then they don't do it. It's frustrating when they just want to sell it," referring to the license.

Delays have plagued the implementation of Arkansas' medical-marijuana program since the state voted to legalize in 2016. The first growing permits weren't issued until July 2018 after legal delays, and the dispensary licenses began being issued in January 2019.

Four of the five cultivators have begun growing, and the final grower -- Delta Medical Cannabis Co. of Newport -- is awaiting inspection, according to the Arkansas Alcoholic Beverage Control agency. The commission awards the licenses and the agency oversees regulation of medical-marijuana businesses.

The 15th and 16th dispensaries opened over the past two weeks, and two more -- Harvest House of Cannabis in Little Rock and Plant Family Therapeutics in Mountain Home -- have requested final inspections.

Since the first medical-cannabis sale in May, dispensaries have sold more than 5,000 pounds of marijuana, totaling more than $33 million in sales, according to state regulators.

All of the 16 nonoperating dispensaries have exceeded the length of time they said in their license applications that it would take for them to open. Most said it would take six to seven months from being issued a license to opening their doors; it has been 12 months.

"While some dispensaries immediately took action upon receiving a license, others have been slower to act," said Doralee Chandler, Alcoholic Beverage Control director. " ... Agents remain ready to conduct inspections on the 16 dispensaries not yet operational but we must first receive the request from owners."

Dispensary owners have said that a variety of circumstances have prevented the on-time opening of their stores. For instance, Alex Gray, an attorney for an individual seeking to buy Pine Bluff Agriceuticals' dispensary license in Pine Bluff, said the dispensary had not yet broken ground because of a problem with the property title.

Part of the problem, industry officials have said, is that most companies didn't anticipate the commission taking more than a year to issue the licenses. That delay complicated land-purchase agreements and other time-sensitive contracts.

Still, David Couch, the Little Rock attorney who drafted the Arkansas Medical Marijuana Amendment, said more dispensaries should have made more progress. He also suggested that the commission look at areas in need and award the eight additional dispensary licenses allowed under the amendment.

"Absent an illness of some sort or something like that, I can't see a lot of reasons why there hasn't been a lot of progress," Couch said. "When those licenses come up for renewal and they're not doing something, I agree with the commission. I wouldn't let them sell without good cause."

The cultivation and dispensary licenses will expire June 30, but companies must apply for renewal by April 30. The commission then plans to meet with each applicant, and they said they'll have more questions for those that have yet to open.

"This is very frustrating for me," said the commission chairman, Dr. Ronda Henry-Tillman. "All the work we put into this, hours and hours and hours, application after application. And now, licenses are being sold and things aren't ready."

Dispensaries would face a large financial loss if the licenses aren't renewed. In addition to any investment in the actual company, they would lose the $15,000 licensing fee.

As of Friday, the Arkansas Department of Health had approved 34,994 medical-marijuana cards. The ID cards are available to patients suffering from one of 18 qualifying conditions or their caregivers.