Contractor is on a border-wall mission 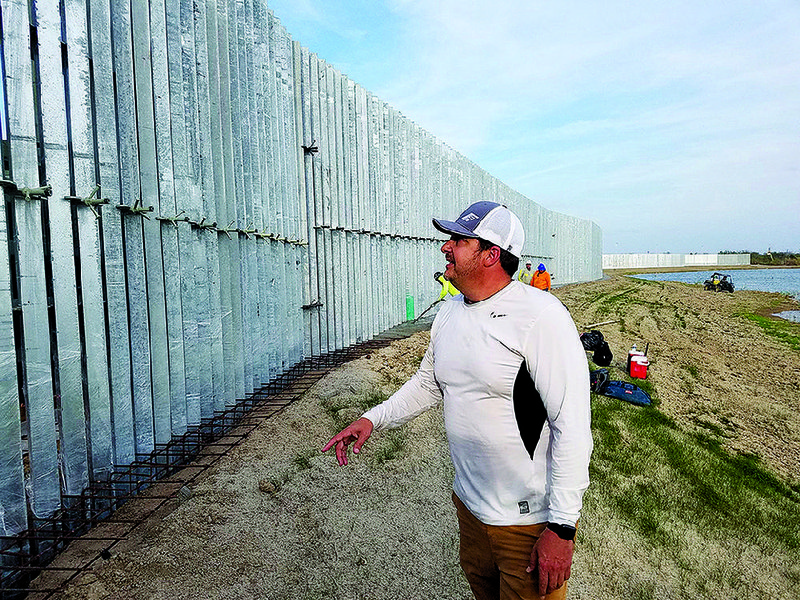 MISSION, Texas -- President Donald Trump took office vowing to build "a big, beautiful wall" along the 1,954-mile U.S.-Mexico border, but so far the federal government has managed to build only about a mile of new border wall.

Texas may be the biggest obstacle. Unlike in other states, most of the United States borderland in Texas is privately owned, which has delayed construction by the U.S. Army Corps of Engineers. Federal lawyers have had to comb property records, track down landowners, make offers to buy the land and -- if owners refuse to sell -- file lawsuits to seize the land.

Tommy Fisher, a contractor who claims to be a deal-maker, says he can do much better.

His company has built around 1,500 feet of what it says will be a 3-mile fence. The cost, he estimates, will be $42 million, faster and cheaper than government contractors who have spent months surveying and building more expensive border fences nearby. The estimated time of completion: two weeks.

Fisher, 50, said he hopes to sell or lease his section of the fence to the federal government, and to persuade it to contract with him to build more. Already, he has bought 100 miles of land elsewhere along the river in Texas from about two dozen private owners. He has also attracted fierce criticism -- and a federal audit.

"We'll protect southern Texas faster than they ever dreamed," he said last week, as he helped workers pour concrete and place 18-foot steel bollards along the banks of the Rio Grande, a few miles west of the border city of McAllen.

Fisher -- who took over the family company from his father when he was 25 after graduating from Arizona State University with a degree in agribusiness -- has moved swiftly to acquire land, overcoming local opposition.

Last year, federal prosecutors and the nonprofit National Butterfly Center sued to stop Fisher's fence. They argued the wall was too close to the Rio Grande and risked changing its flow, altering the border and forcing floodwaters into Mexico in violation of international treaties -- all of which Fisher disputed. Last week, a federal judge ruled in Fisher's favor, lifting a temporary restraining order and allowing construction to resume.

Rey Anzaldua's family has owned land next to where Fisher is building his fence for generations. Now he fears they could lose it to erosion.

"By them clearing the brush from the riverbank, they have speeded up the erosion process and the next flood, we're going to lose some land," said Anzaldua, 75, a retired customs agent. "What damage will it do to our property and properties downriver -- or properties on the Mexican side?"

"He shouldn't be able to do it," Nicol said. "One big concern is that the land the wall sits on is going to erode and get swept away. You can have terrible destruction just from their construction materials hitting things."

Fisher began preparing to build border fencing as soon as Trump got elected. He visited the Arizona border, talked to Border Patrol agents and ranchers.

"I wanted to build the biggest infrastructure known to man, and I said I think we can make it better than what agents have," Fisher said. "If you want to get the border protected, we've got a solution right here in Texas put up faster and better."

Indeed, The Washington Post reported recently, Trump is preparing to divert an additional $7.2 billion in Pentagon funding for border wall construction this year, enough to complete about 885 miles of new border barrier by spring 2022. That would bring the total federal funds allocated to border fencing to $18.4 billion.

"The first priority of the Department of Defense is protection of the homeland," Defense Secretary Mark Esper said Tuesday. "If that's what it takes, we are prepared to support it."

An 8-mile section of border fence being built by a federal contractor near Mission cost $167 million -- about $21 million per mile, $7 million more per mile than Fisher's fence, which also includes a concrete access road. Fisher said that if the government contracted with him to build on the 100 acres of private land he owns along the river in Texas, he could fence it all within a year for about $1.4 billion, and would maintain it for a decade for an additional $400 million.

In an interview, Carmen Qualia, an assistant chief patrol agent at the U.S. Customs and Border Protection agency, who is overseeing border wall construction in the area, said the other fence might have been more expensive than Fisher's because it includes a concrete levee.

She said a 5-mile stretch of border fence being built by federal contractors to the west in Starr County cost $14 million per mile.

Both fences are to be completed within a year, she said, among nine border-wall building projects underway in the Rio Grande Valley.

Already, Qualia said the pace of border wall construction, "is picking up" and "we haven't had any unusual delays." She said the agency was not consulted about Fisher's wall but was not concerned.

When Trump was elected, Fisher had hoped to offer a bid to construct the entire border wall. He went on a blitz of right-wing media outlets, making his case to Trump via television and Twitter.

With 1,600 employees, his family's North Dakota company, Fisher Sand & Gravel, had handled large Western highway projects, including for the California Department of Transportation, but nothing for the Homeland Security Department. The first time they were allowed to bid on the border wall last year, Fisher won a single $400 million federal contract to build 31 miles of fence in Yuma, Ariz. Surveying is underway, he said, but the company faces a federal audit after complaints from members of Congress that Trump steered the work their way.

Fisher insists he did nothing wrong and that the audit will show "how much we saved taxpayers."

Last year, Fisher was hired by conservative Florida nonprofit We Build The Wall -- whose board includes former Trump adviser Steve Bannon -- to build a half-mile of border fence for about $23 million in 10 days in Sunland Park, N.M., despite opposition from local officials.

The group claimed on social media to have raised $25 million to hire Fisher as its contractor for the walls in New Mexico and Texas. Fisher said the nonprofit contributed only $1.5 million of the $42 million for the Texas fence and isn't involved in his other ventures.

He erected one of the wall prototypes in California and lobbied lawmakers and the Homeland Security Department, spending $75,000 in 2018 and $27,500 last year, according to the Center for Responsive Politics. After he helped Kevin Cramer elected as North Dakota's U.S. senator, Fisher attended Trump's State of the Union address as Cramer's guest, shaking the president's hand.

Fisher welcomes the comparisons to Trump: a businessman educated on construction sites. After his crews cleared brush from the riverbank to build his fence, Fisher had them plant palm trees and Bermuda grass. He says he wanted the area to look like a golf course to please Border Patrol agents working the area and of course, Trump.

"I've done everything that I can as a citizen," he said. "The government can see it can be done. Now it's time for them to say we're going to protect this country."

Print Headline: Contractor is on a border-wall mission