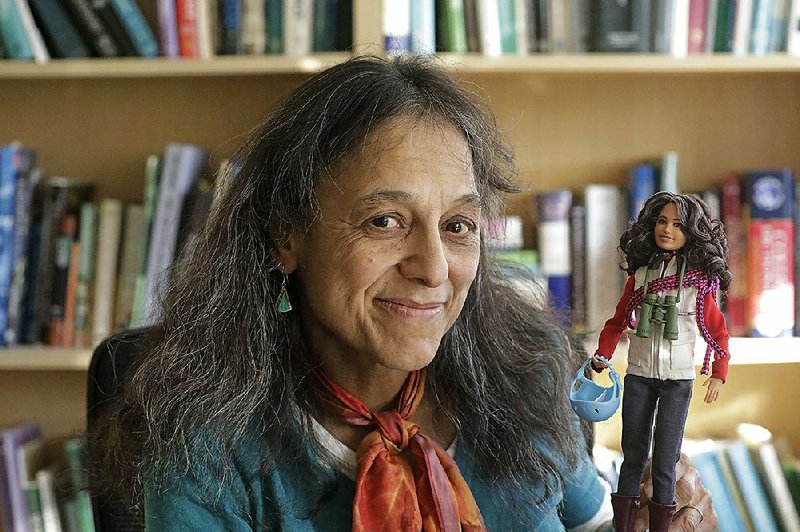 “These explorer Barbies are a big step forward,” forest ecologist Nali-ni Nadkarni said. “It’s not perfect — Barbie still has that impossible body shape and is made of plastic — but it’s a good start.”

Nalini Nadkarni didn't play with Barbies as a girl. She was too busy climbing the maple trees in her front yard in Bethesda, Md.

The forest ecologist might seem an unlikely person to help design and promote Barbie dolls. But over the past six months, she has been inspiring girls worldwide to play with dolls that have a magnifying glass and all-terrain boots instead of tiaras and high heels. It's through new explorer Barbie dolls designed with her input by Mattel and National Geographic.

The dolls, which include an astrophysicist, a conservationist, an entomologist, a marine biologist and a nature photojournalist, are long overdue, said Nadkarni, 65. Nadkarni is a University of Utah biology professor who studies rain forest canopies and how plants get their nutrients.

"When I was growing up in Bethesda, we tried to live simply, following Gandhi's principles," she said. "My dad was from India, and a Barbie didn't quite fit in with living a simple life."

Instead, Nadkarni said, she and her four siblings were encouraged by their mother, who was a stay-at-home mom, and their father, a pharmacologist, to create their own fun.

For Nadkarni, that meant tree climbing.

"As a child, I had a vivid imagination and could picture the treetop as a place of rescue if the neighborhood flooded, or as a hospital for wounded birds," she said. "Because no one else [I knew] climbed trees. It was my own world, and I could be anything in it."

Her work has included taking nature into prisons to help soothe inmates who are anxious and potentially violent.

Nadkarni is doing research in Costa Rica on trees that are still standing after farmers cut down the majority of the forest on their land.

It has never been more important, Nadkarni said, to share what she has learned with a new generation.

"These explorer Barbies are a big step forward," she said. "It's not perfect -- Barbie still has that impossible body shape and is made of plastic -- but it's a good start."

Nadkarni, who received a custom-designed Barbie in her likeness from Mattel as a thank you for her efforts, said she had spent years trying to persuade the toy company to develop a "treetop Barbie," with no luck.

"In 2003, I'd been thinking of ways to help get girls more interested in science, and I asked myself, 'What do girls care about when they're little?' " she recalled.

She looked to her young daughter.

"I knew that girls wanted to play with Barbies and look like Barbies," Nadkarni said. "But what if Barbie had field clothes on and came with a little booklet about canopy plants?"

Mattel wasn't interested in her idea. (Nadkarni said she was told that a "treetop Barbie" wouldn't sell), but she persisted.

She finally created her own treetop dolls, retrofitting Barbies bought at thrift stores with sturdy boots, helmets and climbing harnesses. Mattel agreed that she could produce the dolls on a small scale, and Nadkarni sold about 400 by request over 15 years through her website to friends, her students and others who had heard about her efforts to introduce girls to the science-themed dolls.

Last year, Nadkarni was thrilled to learn that National Geographic was working with Mattel to come up with a new line of adventure dolls, and that they wanted her to serve on their advisory committee.

"That Mattel has perceived there is a market for dolls emulating adventurous women scientists to which young girls can aspire is a great thing," Nadkarni said. "It's a hopeful manifestation of the fact that although there are still inequities in science with women and men, there is a desire for girls to play with an explorer Barbie."

Since sales of the explorer Barbies began in the summer at the National Geographic website and at retailers such as Target and Walmart, Nadkarni said, she has heard from girls coast to coast, thanking her for her work in tropical rain forests and asking questions about how they can make a difference to help trees in their own communities.

Nadkarni has since held ecology discussions with about a dozen elementary school classrooms across the country, she said, hoping to pass along her passion for caring for the environment and the world's endangered forest canopies.

"When I started hearing from these young kids, I realized they had a true sense of the dire straits of our forests," she said. "They really care, and they want us grown-ups to do something to save our environment. It gives me hope for the future that girls -- and boys -- as young as 7 and 8 want to do what they can to help."

One of those girls is Addison Taylor, a fifth-grader at Onondaga Hill Middle School in Syracuse, N.Y., who used to explore the outdoors and play with Barbies as a younger girl.

"I used to climb trees, and I think that Nalini is a good role model for girls because she says that girls can do anything," said Addison, 11. "When I played with Barbies, it would have been fun to have a treetop Barbie with a bunch of tree-climbing equipment. Taking care of our forests is really important."

Two months ago, Addison's teacher, Emily Morrell, contacted Nadkarni, wondering whether she'd spend 30 minutes chatting with her class on Skype about her career as a tree canopy scientist.

Nadkarni was delighted to answer their questions:

"When did you start climbing trees?"

"I started when I was a girl," she told the students. "Growing up, my favorite pastime was to grab an apple and a book after school and climb the maple trees in my front yard."

"Is it scary to climb in the rain forest canopy? Don't you see some dangerous animals?"

"No, not at all -- it's lush and beautiful up there," Nadkarni responded. "I haven't had any problems with animals, but I did have some monkeys chase me once. They were just curious, trying to figure out what I was doing in their tree."

Nadkarni then showed the fifth-graders her special "treetop Barbie," a perpetually smiling look-alike with a rope and binoculars, a smudge-proof "write in the rain notebook" and streaks of gray in her hair.

"The girls in the class were so excited to see that Barbie," said Morrell, 25. "Girls in general are interested in science today and want to grow up to become women who work in science. Children want to help solve our climate crisis. They're our best hope, and Nalini sees that."

"I will always treasure them," Nadkarni said. "I love climbing trees and learning all I can about them. But getting children excited about protecting our forests is one of the most important things I do."