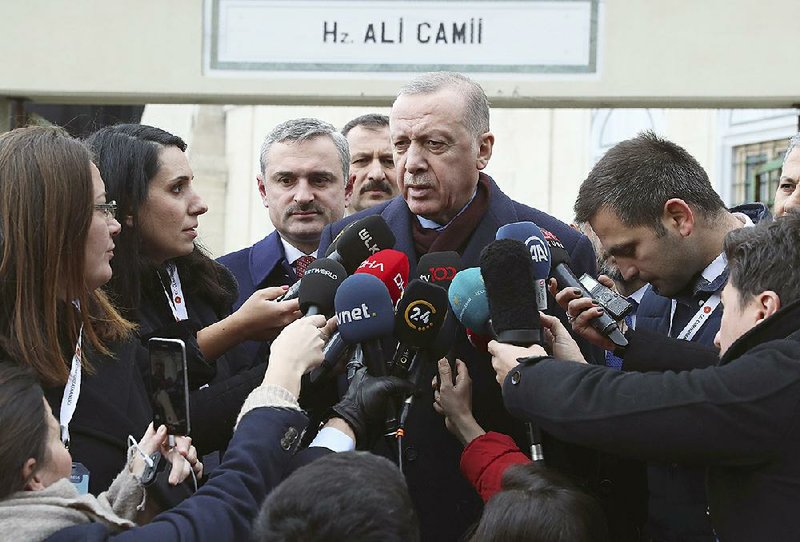 Turkish President Recep Tayyip Erdogan is calling on the European Union to support the Libyan government as it meets today to discuss the deteriorating situation.

BRUSSELS -- For more than eight years, the Libyan conflict has festered, and the European Union has mostly looked away.

But with the recent involvement of Russia and Turkey on opposite sides of a nasty civil war, adding to the meddling of other neighbors, Europe has suddenly woken to the implications of a political crisis in North Africa that is rapidly destabilizing its backyard.

Today, after months of effort, Germany and the United Nations will gather most of the main actors to try to at least bring a sustained halt to the fighting and get outside powers to give Libyans the space to attempt to find some kind of political reconciliation.

The UAE is one of 12 countries with an interest in Libya's long-running civil war that Merkel has invited to Berlin today. Germany's aim is to curb foreign military meddling, solidify a cease-fire and help restart a political process to determine the North African country's future.

It will not be easy, as potential oil and gas bonanzas intensify the jockeying. Increasingly, the fate of Libya's precarious internationally backed government hangs in the balance.

"There has been a major reawakening of geopolitical interest in Libya," said Ian Lesser, director of the Brussels office of the German Marshall Fund and an expert on Turkey and the Mediterranean.

"That begins with issues of migration, energy, security and counterterrorism," he added. "But it is just as much about the geopolitics of relations with Russia and Turkey. If they had not been so assertive, Libya would not have attracted such attention now."

Merkel and the crown prince agreed that there is no military solution to Libya's long-running civil war, the German government said.

They called on the two sides in Libya to agree to a permanent cease-fire, for Libya's state institutions to be rebuilt fully and for terrorism and extremism to be fought, the statement said.

The new EU foreign-policy chief, Josep Borrell, said in an interview with the German weekly Der Spiegel that the bloc could even send troops to safeguard a potential cease-fire. Italy and Greece already have suggested that they would be interested in providing troops for such a mission.

The Libyan mess began with the 2011 overthrow of Moammar Gadhafi after intervention by European forces, with help from the United States. Justified on humanitarian grounds, the war produced chaos when those same Western forces largely abandoned energy-rich Libya to warring militias.

Libya remains a major transit and jumping-off point for sub-Saharan Africans hoping to make the crossing to Europe. Since the migration crisis of 2015-2016, "the EU viewed Libya mainly through the prism of the migration problem," said Claudia Gazzini, a senior analyst for the International Crisis Group.

Individual European countries, at the same time, pursued their own, divergent interests in Libya, often at cross-purposes.

But the entry of Russian proxies into the conflict last year and, more recently, Turkey's pledge to send its own forces into the mix meant Europe could no longer ignore the matter.

It also has made the fissures in the Europeans' approach to Libya more and more untenable as the civil war turns into a wider playground for outsiders.

On one side, Egypt, the United Arab Emirates, Saudi Arabia, France and now Russia support Khalifa Hifter, whose forces have laid siege to Tripoli, the capital, threatening the internationally backed government there.

On the other, Qatar, Italy and now Turkey support the Government of National Accord. Created by a 2015 U.N.-sponsored political deal, the government is led by Prime Minister Fayez al-Sarraj.

The divisions between France and Italy have split the EU and weakened its positioning on Libya.

Turkish President Recep Tayyip Erdogan has called on the EU to support the internationally recognized Libyan government in Tripoli ahead of today's summit.

In an article published Saturday on the Politico website, Erdogan said European leaders "ought to talk a little less and focus on taking concrete steps" in the conflict-torn North African nation.

In November, Turkey and the Libyan government in Tripoli signed a controversial maritime deal on delineating a boundary between the two countries in the Mediterranean. The agreement would give Turkey and Libya access to an economic zone despite the objections of Greece, Egypt and Cyprus, which lie between the two geographically.

"Europe finds itself at a crossroads," he said. "And at this historic junction, those working for peace must be courageous and do everything in their power to end violence.

"Europe can count on Turkey -- an old friend and ally -- to achieve that goal."

Just last week, Russia and Turkey gathered both Hifter and Sarraj in Moscow to get them to sign a permanent cease-fire agreement, another sign of Russian diplomatic activity to fill vacuums created by Europe and the U.S.

But Hifter, who believes he can still take Tripoli, refused to obey his Russian backers and left Moscow without signing.

Some believe that he will agree to do so today in Berlin, and that his signature, sincere or not, will be a kind of gesture from President Vladimir Putin of Russia to Merkel.

The Trump administration, which had supported the Sarraj government and the U.N. process, reversed course in April after a meeting with Egypt's president, Abdel-Fattah el-Sissi, according to the International Crisis Group.

But Washington is not very involved and has just announced that it will sharply reduce the U.S. military presence in West Africa intended to fight terrorism alongside the French, so the U.S. influence will be further eroded.

A senior State Department official said that Secretary of State Mike Pompeo, who altered his schedule to attend the high-level Berlin meeting, would urge three things: the continuation of a cease-fire, the withdrawal of all external forces and a return to a Libyan-led political process facilitated by the U.N.

Historical alliances in Libya and interest in gas finds in the eastern Mediterranean are at the heart of the problem and have raised the stakes for outside parties.

Migration aside, Italy, the former colonial power, and its energy giant, Eni, are key players in Libya. So stability matters for Rome, and the government also has tried to mediate between Hifter and Sarraj.

But with the trend of the fighting moving Hifter's way and Eni shifting to more commercial interests in the eastern Mediterranean, the Italian position has become more ambiguous.

"If a situation unfolds whereby Russia and Turkey make peace, and Russia makes heavy investments in oil and gas infrastructure in Libya, that means that's one more pipeline into Europe that's in the hands of Russians," he added. "That's quite dangerous."

Meanwhile, a move by Libya's eastern forces to choke off oil exports from its territory threatens to throttle much of the country's oil production, the National Oil Corp. said Saturday, escalating tensions ahead of the peace summit.

Libya's critical oil industry is dominated by the National Oil Corp., which declared that the suspension of exports would prevent the company from fulfilling contracts with international oil companies.

It warned that the closure of eastern port terminals under Hifter's control would cut crude oil production by 800,000 barrels a day and estimated that the country would lose $55 million in daily revenue.

In an urgent letter to Aguila Saleh, the head of the eastern parliament, the oil company demanded the "immediate cancellation" of the leadership's decision to close oil ports "for the benefit of the public."

The U.N. mission in Libya expressed "deep concern" over the efforts to disrupt oil production, warning of "devastating consequences." Its statement urged Libyans to "exercise maximum restraint" as international negotiations seek a resolution to the crisis.

Information for this article was contributed by Steven Erlanger and Matina Stevis-Gridneff of The New York Times; and by Andrew Wilks, Rami Musa and Isabel Debre of The Associated Press.