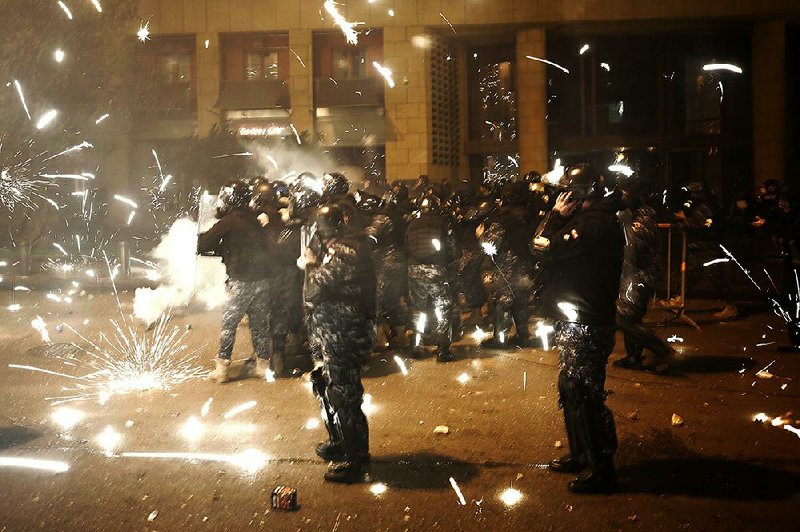 Anti-government protesters shoot fireworks at Lebanese riot police Saturday on a road leading to the parliament building in Beirut.

BEIRUT -- Police fired volleys of tear gas and rubber bullets in Lebanon's capital Saturday to disperse thousands of protesters amid some of the worst rioting since demonstrations against the country's ruling elite broke out three months ago. More than 150 people were injured.

Thick white smoke covered the downtown Beirut area near parliament as police and protesters engaged in confrontations that saw groups of young men hurl stones and firecrackers at police, who responded with water cannons and tear gas. Some protesters were seen throwing up on the street from inhaling the gas.

The violence began after some protesters started throwing stones at police deployed near the parliament building, while others removed street signs, metal barriers and branches of trees, tossing them at security forces.

The clashes took place with the backdrop of a rapidly worsening financial crisis and an ongoing impasse over the formation of a new government after the Cabinet headed by Prime Minister Saad Hariri resigned in late October.

Lebanon has witnessed three months of protests against the political elite who have ruled the country since the end of the 1975-90 civil war. The protesters blame politicians for widespread corruption and mismanagement in a country that has accumulated one of the largest debt ratios in the world.

The protesters had called for a demonstration Saturday afternoon with the theme "we will not pay the price" in reference to debt that stands at about $87 billion, or more than 150% of GDP.

[Video not showing up above? Click here to watch » https://www.youtube.com/watch?v=OtulPMJ7lxA]

As rioting took place in central Beirut, thousands of other protesters arrived later from three different parts of the city to join the demonstration. They were later dispersed and chased by police into nearby Martyrs Square, which has been a center for protests.

Lebanon's Internal Security Forces called on all peaceful protesters to "immediately leave the area of riots for their own safety." It added that some police officers who were taken for medical treatment were attacked by protesters in hospitals.

As clashes continued, about two dozen men believed to be parliament guards attacked the protesters' tents in Martyrs Square, setting them on fire. A gas cylinder inside one of the tents blew up. The fire spread quickly and charred a nearby shop.

The bells of nearby St. George Cathedral began to toll in an apparent call for calm, while loudspeakers at the adjacent blue-domed Muhammad Al-Amin mosque called for night prayers.

Later in the evening, hundreds of protesters chanting "Revolution" chased a contingent of riot police near the entrance of the mosque, forcing them to withdraw. Inside the mosque, several men were treated for gas inhalation and some families were said to be hiding inside.

"We call on the security forces to be merciful with women and children inside the mosque," a statement blared through the mosque's loudspeakers.

President Michel Aoun called on security forces to protect peaceful protesters and work on restoring clam in downtown Beirut and to protect public and private property. He asked the ministers of defense and interior and heads of security agencies to act.

"The confrontations, fires and acts of sabotage in central Beirut are crazy, suspicious and rejected. They threaten civil peace and warn of grave consequences," tweeted Hariri, the caretaker prime minister, who lives nearby. He called those behind the riots "outlaws" and called on police and armed forces to protect Beirut.

The Lebanese Red Cross said it took 65 people to hospitals and treated 100 on the spot, calling on people to donate blood. As the clashes continued, more ambulances were seen rushing to the area and evacuating the injured.

Late on Saturday most of the protesters were forced out of the area by police firing tear gas and sometimes rubber bullets. Still, security remained tight as more reinforcements arrived.

Panic and anger have gripped the public as their local currency, pegged to the dollar for more than two decades, plummeted. The Lebanese pound lost more than 60% of its value in recent weeks on the black market. The economy has seen no growth and foreign inflows dried up in the already heavily indebted country that relies on imports for most of its basic goods.

Prime Minister-designate Hassan Diab had been expected to announce an 18-member Cabinet on Friday, but last-minute disputes among political factions scuttled his latest attempt.

Information for this article was contributed by Sarah El Deeb, Hussein Malla, Hassan Ammar and Bilal Hussein of The Associated Press. 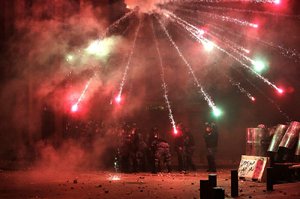