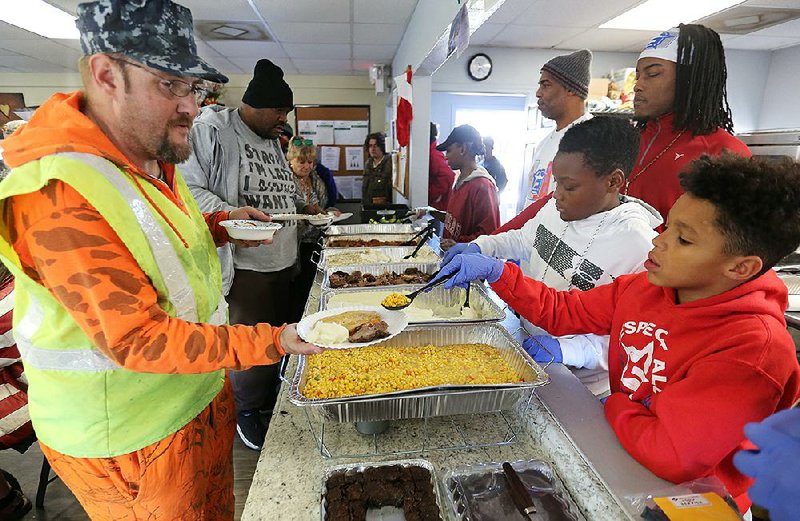 NWA Democrat-Gazette/DAVID GOTTSCHALK Clarke Mitchell (left) receives a spoonful of corn Tuesday, December 31, 2019, from Kingston London, 11, as he volunteers to serve a New Year's Eve meal at the 7 Hills Homeless Center in Fayetteville. The meal was prepared and hosted by Secondhand Smoke NWA and the Northwest Arkansas Generals Youth and Adult Football. The center will be closed today.

That may not mean anything big, experts said, because Arkansas' economy has still improved immensely since the recession roughly 12 years ago.

Census five-year estimates, which approximate a figure based on the most recent five years of surveys, showed an uptick in poverty from 16.3% of Arkansans in 2017 to 16.8% in 2018. That put Arkansas in sixth place among states and Washington, D.C., for highest poverty rates, an increase from eighth place.

But it's an increase that experts said is not statistically significant.

Census one-year estimates showed an uptick in poverty from 16.4% to 17.2% in that same time frame, which is within the data sets' margins of error.

Yet, experts said, either poverty measure for 2018 is still lower than nearly all estimates for the state going back more than a decade.

"I think the significant thing about it is, compared to three or four years ago, we're down significantly," said Michael Pakko, chief economist and state economic forecaster at the University of Arkansas at Little Rock's Arkansas Economic Development Institute. "For the past two years, it's been under 17%. It's been several years since it was at that level before. You have to go back to 2004 to the last time it was below 17%."

Job growth in the state has slowed a bit since 2017, but it hasn't stopped, said Mervin Jebaraj, director of the University of Arkansas, Fayetteville Center for Business and Economic Research. Arkansas has had several years of job growth since the recession, he said.

Since 2017, job growth has been concentrated in metropolitan areas, while jobs have been stagnant or declining in more rural areas, Jebaraj said. That pattern is the result of multiple factors, he said.

"Metro areas have the scale to provide the amenities, which then draws in the talent," Jebaraj said. "This is why cities grow."

Economies could improve with migration to metropolitan areas, as has been the state and national trend, he said, or industries could focus on building up more rural areas. For example, businesses could capitalize on the once-larger timber industry in south Arkansas, he said.

Pakko cautioned against drawing too many conclusions from poverty statistics, including comparisons with other states.

The Census Bureau does a good job, compared with other data sources, of providing margins of error for its estimates, he said. But what the Census Bureau considers poverty doesn't factor in earned income tax credits, subsidized housing or food stamps, among other things that may assist people in need, he noted.

The formula also includes food-buying habits based on how families lived decades ago, he said.

Some economists have argued that what is considered poverty should be a higher figure.