ON BOOKS: Stuck in the middle with John Updike 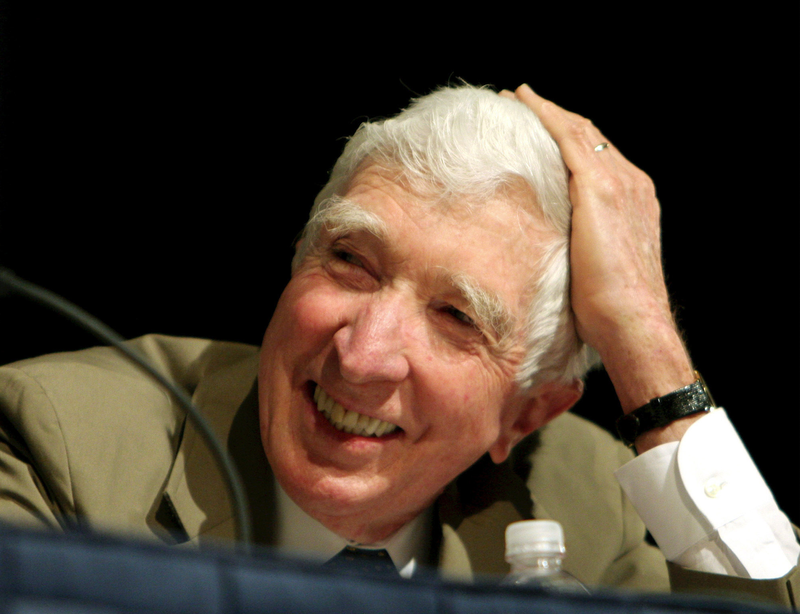 In this 2006 photo, the Pulitzer Prize-winning author John Updike takes part in a panel discussion at BookExpo America in Washington. (AP)

"My subject," John Updike told Life magazine's Jane Howard in 1966, "is the American Protestant small-town middle class. I like middles. It is in mid-dles where extremes clash, where ambiguity restlessly rules. Something quite intricate and fierce occurs in homes, and it seems to me without doubt worthwhile to examine what it is.

"When I write, I aim in my mind not toward New York but toward a vague spot a little to the east of Kansas," he continued. "I think of the books on library shelves, without their jackets, years old, and a countryish teenaged boy finding them, and having them speak to him." (Move the time forward a few years, and I was that countryish teenaged boy. I fell right into his trap.)

With two-thirds of the century gone, Updike seemed disconnected from what we now think of as the '60s. His first novel, The Poorhouse Fair, was audaciously nostalgic, told from the point-of-view of a 94-year-old. 1960's Rabbit, Run was a brilliant portrait of a dodgy, weary young middleman named Harry Angstrom who apparently peaked in high school (though his story would play out over three more novels). The Centaur, which won the National Book Award in 1963, threaded the legend of Chiron ("noblest of all the Centaurs"), with the story of a beaten-down Pennsylvania schoolteacher who fears he's losing his son. 1965's Of the Farm was a lyrical play for four voices, about a Manhattan advertising executive who brings his new family to visit his widowed mother on her fallow farm.

Later in 1966, he was cornered by "a group of British editors" seeking his opinion on the war in Vietnam. This so irritated Updike that he wrote a piece for Norman Podhoretz' Commentary spelling out his thought, which could have passed for the majority opinion of suburban white America -- what Nixon later called the "Silent Majority":

"I do not believe that the Vietcong and Ho Chi Minh have a moral edge over us, nor do I believe that great powers can always avoid using their power. I am for our intervention if it does some good--specifically, if it enables the people of South Vietnam to seek their own political future."

But when his novel Couples was published in 1968, the prodigiously talented boy wonder novelist -- he was still only 36 -- turned bawdy, as he depicted with clinical precision and a certain unreleased glee, the sexual adventures of 10 couples living in a small Massachusetts town not too different from the one to which the author had recently moved. Updike gave the word "swinger" its connotative naughtiness.

"The book is, of course, not about sex as such," Updike told an interviewer. "It's about sex as the emergent religion, as the only thing left."

He followed that with Rabbit Redux, the second installment of the Harry Angstrom story, this time more directly addressing the times -- Harry starts a commune in his middle-class home, he does drugs, debates issues of race and war and upsets his conservative neighbors. A Month of Sundays (1973) began Updike's playful engagement with Nathaniel Hawthorne's seminal novel of adultery and Puritanism, The Scarlet Letter (1850), which he would tease out over two more novels, Roger's Version (1986) and S (1988).

These three novels of Updike's late beginnings have just been released (along with the short story that was the first version of the novel Couples, a piece the New Yorker found too risque to publish) as the second volume of the Library of America's edition of Updike's novels, Updike: Novels 1968-1975 ($45) and they represent an important moment in our cultural history. Not that Updike exactly became what we might these days describe as "woke" during this period, but when his powers were at their peak and he began confidently moving away from the comfortable shallows of his earliest works.

While just a few years before, Updike might have seemed quaint, Couples landed him on the cover of Time magazine and the top of the best-seller lists, but it represents a rare case where an author's better work becomes his most popular. Updike was never a reflexive bad boy like Philip Roth or Henry Miller, but he rejected the idea of good taste as anything more than a "social concept."

These days, Updike's reputation has been banged up a bit by some of his later works. He was never a multi-culturalist, and his gender politics are somewhat problematic when considered in the context of #metoo. It is probably not too much to say that he had limited empathy for creatures unlike himself. (See his later novels, like 1994's Brazil, which The New York Times' Michiko Kakutani called an "ugly, repellent novel" that proliferates "racial stereotypes with even less sensitivity or insight than in the ridiculous frat house movie Soul Man and his penultimate novel, 2006's Terrorist, a well-meaning but hopelessly clueless attempt to plumb the inner life of an American-born 18-year-old half- Egyptian jihadist living in New Jersey.)

As disastrous as some of these late-career stretches seemed, Updike was a master of the middle, of the specific kind of WASP-ish American existence that he described as "ordinary life." It was not everyone's ordinary life, of course -- it was decidedly middle class. But no one ever made it more interesting.

Print Headline: Stuck in the middle with John Updike