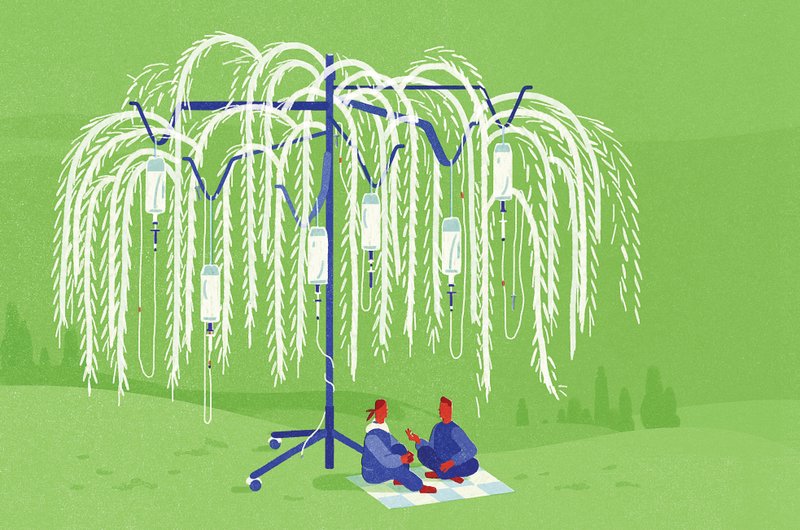 Do you know what to say or what to do when a friend, relative or acquaintance has cancer?

Chances are, like many of the people who interacted with Lynda Wolters, you may not. Wolters, author of the recently published book Voices of Cancer, was found in midlife to have a relatively rare and currently incurable cancer called mantle cell lymphoma.

"Because people had no idea what to say to me, for me, or about me, they often avoided me instead," she wrote, prompting her to reach out to strangers in support groups for spiritual strength.

Those who did speak to Wolters too often said something unhelpful or off-putting like "Call me if you need anything" or "How are you feeling?" In her blog, she sought to reassure hesitant friends: "I would rather see your face and the pain and fear in your eyes than to have you feel too unsure and awkward to see me. I would rather hear about you, your work, your life, your kids and your puppy's antics than I would about my sickness."

Fortunately for my friend Sara Nodjoumi, a 46-year-old documentary film producer in Brooklyn and mother of two young boys, she had a far better experience after a diagnosis of breast cancer last summer.

"People were incredible for the most part," Nodjoumi said. "Just being there with a kiss and a hug might have been enough." But she got a lot more. "People sent latkes, flowers, fruit baskets, knishes, baklava, books, advice -- everything was helpful in its way," she said. She delighted in the friend who came to organize her closet, the eight pints of ice cream a friend sent from a special shop in Cincinnati, as well as gifts of massages and psychotherapy sessions she could share with her husband.

Perhaps most helpful while she underwent taxing surgery and chemotherapy was the friend who organized a "meal train" of people who delivered family meals and school lunches every day for six weeks; the relatives who took her sons on a three-week trip to Chicago; and the friend who cared for the boys at the friend's home in Brooklyn for an entire week.

"People were so generous and helpful," she told me. "It all made me feel very loved."

But like Wolters, Nodjoumi was distressed by those who told bad-news stories or, for Wolters, those who were overly optimistic, saying, "Don't worry, everything will be fine." As she wrote: "People don't want advice on how they should feel ('Look on the bright side') or how to be fixed ('Things will be better tomorrow'); they often just want to be heard. Acknowledging a person's pain or bad day, instead of trying to move them past it, is the most helpful way to go. It is best to simply say: 'I'm sorry you are going through this. Would you like to talk about it?'"

Dr. Wendy Schlessel Harpham, a Dallas physician who was in and out of treatment for chronic lymphoma for many years and is now in a long-lasting remission, says the best things to say depend on your relationship with the patient and what the person is currently going through physically and emotionally. But whatever you choose to say or do, she said, show love and support without judgment or instructions on how the person should feel.

"Don't ask, 'How are you?'" Harpham told me. "Ask, 'How are things?' Don't ask about treatment or if the cancer is curable. Don't volunteer stories about yourself or other patients, and don't tell the patient what to think or feel or do."

When offering help, she said, be specific about what you can provide to support the patient: meals; child care or elder care; transportation to and from treatments; companionship during doctor visits (especially helpful if you can take notes), tests or treatments; a sounding board, perhaps even in the middle of the night; a lunch date or fun outing; even a blank journal without instructions about what the patient records in it.

Harpham is the author of Healing Hope: Through and Beyond Cancer, among other very helpful books on living with and after cancer. Both she and Wolters caution against offering patients unrealistic advice and pie-in-the-sky predictions.

"The most ridiculous thing I heard was 'The best thing you can do for your cancer is to stay positive,'" Nodjoumi said. "Does that mean if I don't stay positive my cancer will come back?"

One patient told Wolters, "Sometimes I feel like I can't cry or be mad because they think I'm not being positive."

She wrote: "It can be too much to handle when a supporter is filled with unrealistic ideas of rainbows and unicorns regarding our diagnosis, prognosis or treatment. This is a crappy fight, and we are sick and we are tired, and sometimes your living in la-la land is more than we can take. We want to be positive, and we appreciate you as our cheerleader, but we also need realism."

At the same time, Harpham suggests asking patients, whatever the status of their disease, what they are hoping for. Encourage them to focus on short-term goals, and ask if there's some way you can help them achieve those goals. Guide them to talk about hopes they can do something about, and listen without interrupting, judging or trying to fix what they say. In all cases, she said, the underlying message should be "I hear you ... I believe you ... I am here for you."

But never ask about a cure. "Cure is just too big a word for most of us to feel comfortable with," Wolters wrote. "As a patient who has been told there is no cure for her disease, the word remission feels like the heavens opened up and the angels sang; it really doesn't get much better."

Many patients are like Harpham, going in and out of remission perhaps several times, and each time "they have to deal with the 'But weren't you cured?' question from family and friends," Wolters observed. "Regardless of how long a person has been in remission, we still hold our breath during checkups and hear the whisper in our head: 'Is it back?'"

Patients might help their well-wishers better understand cancer by describing "cure" as a pipe dream they'd rather not discuss, saying instead that they currently "have no evidence of disease" or "no evidence of active disease."