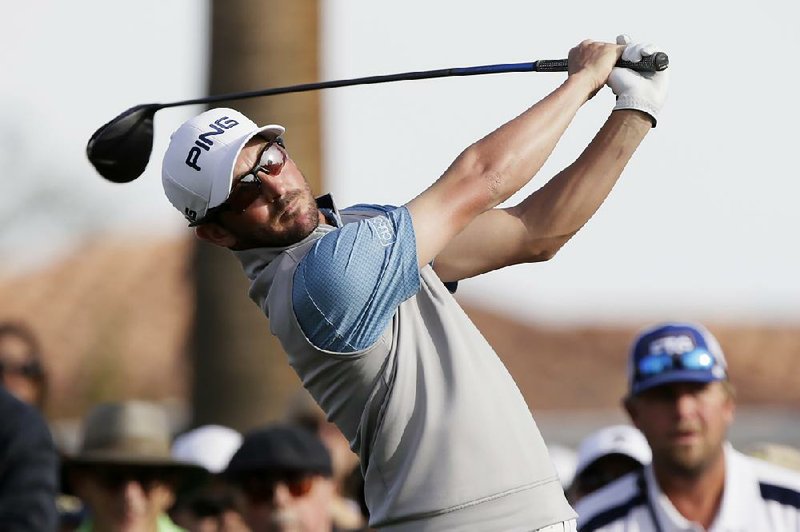 Former Arkansas Razorback Andrew Landry follows through on the 15th tee during the final round of The American Express on Sunday on the Stadium Course at PGA West in La Quinta, Calif. Landry finished with a 5-under 67 for a two-stroke victory. (AP/Alex Gallardo)

LA QUINTA, Calif. -- Former University of Arkansas golfer Andrew Landry was reeling after blowing a six-stroke lead on the back nine Sunday in The American Express.

"I don't want to be a part of something like that ever again," the 32-year-old Texan said.

He regrouped -- telling caddie Terry Walker, "Let's go get this job done, like, quit messing around" -- to win his second PGA Tour title with a shot to spare.

Landry broke a tie with Abraham Ancer with a 7-foot birdie putt on the 17th hole, the jagged rock-ringed, island-green par 3 called Alcatraz.

"That was probably the shot of the tournament for me," Landry said. "Just to be able to go over there and, to that right hole location, and just hold one up and hit a good distance and have a 7-, 8-footer to look at. ... Thankfully, it went in and kind of made 18 a little bit easier."

He closed with a 6-foot birdie putt on the par-4 18th for a 5-under 67 and a two-stroke victory, winning two years after losing a playoff to Jon Rahm at PGA West.

"This is a golf course that has suited me very well in the past," Landry said. "And just to look back on some of the things that happened a couple years ago and then now, just to be able to finally get it done. I didn't want to have to go back into a playoff again."

Landry won after missing seven of eight cuts to start the season.

Trying to become the third Mexican winner in PGA Tour history and first since 1978, Ancer matched the Stadium Course record with a 63.

"All week, really, I hit the ball great off the tee and iron shots, and in the first three rounds, I feel like I didn't score as low as I should have for how good I hit the ball," Ancer said. "But stayed patient and today the putts started to fall in."

He realized he was tied for lead just before teeing off on 17.

"I wasn't paying much attention to the leaderboard," Ancer said. "And then that's when I noticed and I was like, 'All right, well, we got to make two other birdies.' I made the putt there on 17, which was big, and then just couldn't make it happen on 18. But I played good, man. I'm proud of how I played."

Landry appeared to be cruising to victory when he birdied the first three holes on the back nine to open the six-shot lead. He bogeyed the next three holes, made a par on the par-5 16th that felt like another bogey, and was tied when Ancer ran in a 25-footer on 17.

"Just kind of calmed myself down and said, 'Hey, look, these are two holes that we can go out and get, they suit my game very well, especially 18,' " Landry said.

Landry finished at 26-under 262. He opened with a 66 on the Stadium Course, shot 64 in the second round at La Quinta Country Club and had a 65 on Saturday on PGA West's Jack Nicklaus Tournament Course for a share of the third-round lead with Scottie Scheffler -- four strokes ahead of third-place Rickie Fowler.

The anticipated duel between Landry and Scheffler fizzled early.

Scheffler bogeyed the par-4 first after his drive went left and rolled back down a hill into a large divot. He also dropped strokes on the par-5 fifth and long par-3 sixth to fall four shots behind Landry. On the water-guarded fifth, his aggressive play with a fairway wood from a downhill lie near a right-side bunker went well left and, after a long chip, he missed a 3-footer for par.

Scheffler shot 70, briefly giving Landry a scare with an eagle on 16, to finish third at 23 under.

"I didn't have my best stuff today," Scheffler said. "Swing felt pretty loose again and got the best of me early and just put myself too far behind."

Fowler had a 71 in the final group with Landry and Scheffler to tie for 10th at 18 under. 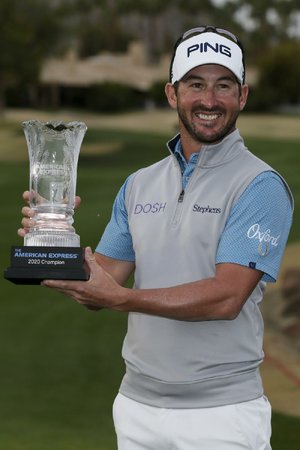