Absurd, Schiff replies as sides ready for trial by Compiled by Democrat-Gazette staff from wire reports | January 20, 2020 at 7:00 a.m. 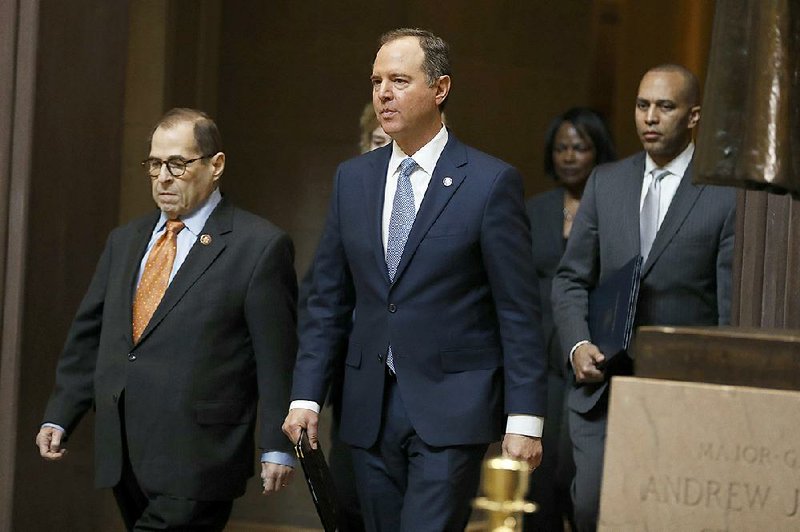 WASHINGTON -- President Donald Trump's lawyers on Sunday previewed their impeachment defense with the assertion that the charges against the president are invalid, adopting a position rejected by Democrats as both sides sharpened their arguments for trial.

"Criminal-like conduct is required," said Alan Dershowitz, a constitutional lawyer on Trump's defense team. Dershowitz said on CNN's State of the Union that he will be making the same argument to the Senate and that if it prevails, there will be "no need" to pursue the witness testimony or documents that Democrats are demanding.

The "no crime, no impeachment" argument is part of a multipronged strategy the president's team is developing ahead of its impeachment trial brief, which is due today. Trump asserts that he did nothing wrong and that he is the victim of a witch hunt.

Rep. Adam Schiff, D-Calif., the lead Democratic prosecutor of the impeachment case, said on ABC's This Week that the White House is pushing an "absurdist position."

"That's the argument I suppose you have to make if the facts are so dead set against you," Schiff said.

"There is ample evidence, overwhelming evidence," House Judiciary Committee Chairman Jerrold Nadler, D-N.Y., who is also an impeachment manager, said on CBS' Face the Nation. "Any jury would convict in three minutes flat that the president betrayed his country by breaking the law."

The back-and-forth came as all concerned agitated for the Senate to get on with the third impeachment trial in the nation's history. Behind the scenes Sunday, the seven House managers were meeting on strategy with staff and shoring up which prosecutor will handle which parts of the case. They were expected to do a walk-through of the Senate chamber today around lunchtime, according to multiple Democrats who spoke on condition of anonymity to discuss plans.

The White House, meanwhile, was working on its response to the House's brief outlining the charges.

As Democrats and Republicans work on their strategies, Senate Majority Leader Mitch McConnell, R-Ky., has yet to release ground rules for how the proceedings will follow -- and differ from -- the precedent of President Bill Clinton's impeachment trial in 1999.

While McConnell has yet to release his proposal for how the trial will be conducted, some GOP senators have suggested in recent days that their party may aim to condense the proceedings into as short a time frame as possible.

On NBC's Meet the Press, Sen. David Perdue, R-Ga., said Republicans will probably propose a format that includes 24 hours of presentation by the House impeachment managers over two days, followed by an equal amount of time for a presentation by Trump's legal team. That would be followed by 16 hours of questioning from members of the Senate.

Senators would submit their questions to Supreme Court Chief Justice John Roberts, who is presiding over the trial. The issue of witnesses would then be addressed, Perdue said.

Senate Minority Whip Dick Durbin, D-Ill., said Sunday that he and other Senate Democrats still haven't heard from McConnell regarding his proposed outline for the trial.

"There hasn't been the most basic negotiation or exchange of information," Durbin said on Meet the Press.

"The president deserves a fair trial. The American people deserve a fair trial. So let's have that fair trial," Rep. Jason Crow, D-Colo., one of the seven impeachment prosecutors said on State of the Union.

Democrats are also pushing for witnesses and documents that weren't part of the House proceedings and a few Republicans said they want to know more before deciding. New information from Lev Parnas, an indicted associate of Trump lawyer Rudy Giuliani, is being incorporated in the House case and Senate Democrats want to call John Bolton, the former national security adviser, among other potential eyewitnesses, after the White House blocked officials from appearing in the House.

With Republicans controlling the Senate 53-47, they can set the trial rules -- or any four Republicans could join with Democrats to change course.

Whatever happens in the Senate, House Speaker Nancy Pelosi, D-Calif., has said, Trump will "be impeached forever." Members of Trump's team countered that if they win a vindication for Trump, it means "there will be an acquittal forever as well," Trump attorney Robert Ray said on Fox News Channel's Sunday Morning Futures. "That is the task ahead."

For all of the suspense over the trial's structure and nature, some clues on what's to come sharpened on Sunday.

The president's lawyers bore down on the suggestion that House impeachment is invalid unless the accused violated U.S. law. Dershowitz's argument, backed up by Ray, refers to an 1868 speech by Benjamin Curtis, who after serving as a Supreme Court justice acted as the chief lawyer for Andrew Johnson at his Senate impeachment trial.

"There can be no crime, there can be no misdemeanor, without a law, written or unwritten, express or implied," Curtis told the Senate. "There must be some law; otherwise there is no crime. My interpretation of it is that the language 'high crimes and misdemeanors' means 'offenses against the laws of the United States.'"

Johnson was ultimately acquitted by the Senate.

"The core of the impeachment parameters allege that crimes have been committed, treason, bribery, and things like that, in other words, other high crimes and misdemeanors," Ray said Sunday.

Republicans have long signaled the strategy, which has, in turn, been disputed by some scholars.

"It's comically bad. Dershowitz either knows better or should," said Frank Bowman, a University of Missouri law professor and a former student of Dershowitz's at Harvard. "It's a common argument, and it's always wrong."

Even as he made the case for Trump's acquittal, Dershowitz on Sunday distanced himself from the rest of Trump's defense team and said he would merely speak about the Constitution at the trial. He refused to endorse the strategy pursued by other members of that team or defend Trump's conduct and said he didn't sign onto the White House brief filed Saturday that called impeachment a "brazen" attempt to overturn the 2016 election.

"I'm a liberal Democrat ... I'm here as a constitutional lawyer," Dershowitz said on This Week. "I'm here to lend my expertise on that issue and that issue alone."

In a BBC interview on Saturday, Dershowitz said he does not plan to vote for Trump in November and declared that if the Senate votes to acquit the president, it would create "ambivalence in me as it does whenever I represent somebody whose acquittal would produce results that make me unhappy as an individual."

He added: "But I would never, ever allow my own partisan views to impact my views on the Constitution."

No senators were more eager to get going than the four Democratic presidential candidates facing the prospect of being tied up in the Senate ahead of kickoff nominating votes in Iowa and New Hampshire. During the trial, senators are required to be present for daily proceedings -- except Sundays, per Senate rules -- during the impeachment trial.

"I'd rather be here," Sen. Bernie Sanders of Vermont said on New Hampshire Public Radio while campaigning Sunday in Concord.

Sanders pointed out in New Hampshire that he is "not the only senator who's going to be stuck in the impeachment." Also off the campaign trail will be Sens. Elizabeth Warren of Massachusetts, Amy Klobuchar of Minnesota and Michael Bennet of Colorado.

"I can't tell you how long I'm going to be in Washington. Is it a week? Is it two weeks? Is it three weeks?" Sanders said on NPR. "So it creates a difficult political situation."

Information for this article was contributed by Laurie Kellman, Eric Tucker and Hunter Woodall of The Associated Press and by Felicia Sonmez, Mike DeBonis, Lena Sun and Todd Frankel of The Washington Post. 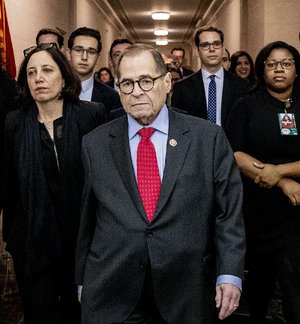 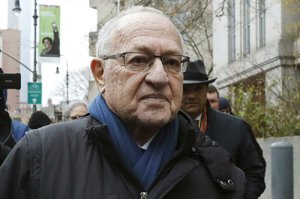 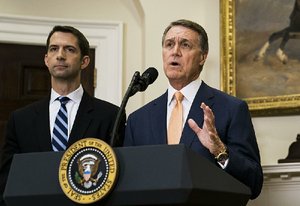 Photo by NYTNS
Sens. Tom Cotton (R-Ark.) and David Perdue (R-Ga.) deliver a statement after President Donald Trump announced proposed immigration legislation at the White House, in Washington, Aug. 2, 2017. The Raise Act, sponsored by Cotton and Perdue would overhaul decades of immigration policy by replacing a system that favors family ties in deciding who can move to the United States legally with merit-based preferences based on skills and employability.