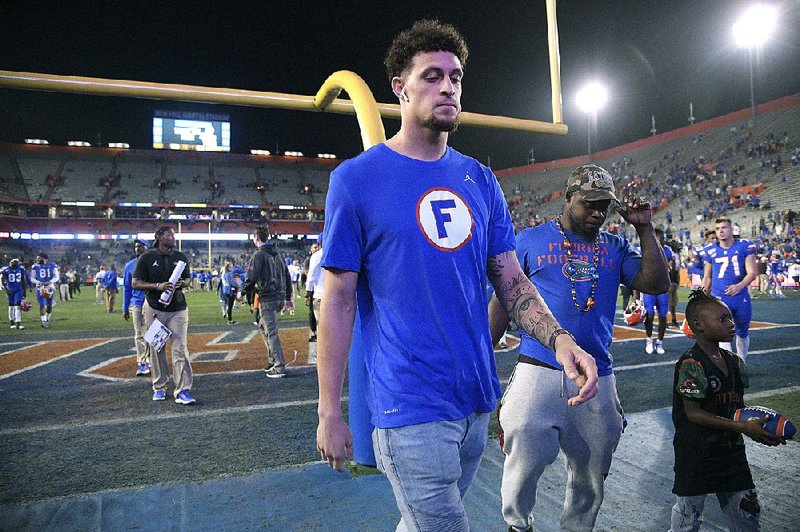 Former Florida quarterback Feleipe Franks announced plans Monday to transfer to the University of Arkansas after taking an official visit to Fayetteville over the weekend.

Coach Sam Pittman and his staff impressed Franks during the 48-hour visit.

"Just how genuine everybody is," Franks said briefly after his visit. "I think that's something that's really good and something you don't get much of nowadays, but that was the best part."

His talks with offensive coordinator Kendal Briles made him feel comfortable.

"That's what I came down here for," Franks said Sunday. "Not really flashy, this, that and the other, but just to talk ball, so I liked it."

Franks, 6-6, 238 pounds, played at Wakulla County High School in Crawfordville, Fla., and was an ESPN 4-star prospect, the No. 5 pocket passer and No. 65 overall recruit in the nation in the 2016 class.

He signed with the Gators over Florida State, Alabama, Georgia, Miami and numerous others. He played in the 2016 U.S. Army All-American Bowl in San Antonio and was a 2015 Elite 11 Finalist.

Franks announced his plans to leave the Gators on Dec. 1 after playing three seasons. He redshirted as a freshman.

As a redshirt freshman, Franks played in all 11 games and made eight starts. He passed for 1,438 yards with 9 touchdowns and 8 interceptions.

Franks started all 13 games as a sophomore and completed 188 of 322 passes for 2,457 yards, 24 touchdowns and 6 interceptions, and rushed for 350 yards on 110 carries and scored a team-high tying 7 rushing touchdowns.

He was Florida's starting quarterback again in 2019, but suffered a dislocated ankle that included a fracture during the third game against Kentucky. He missed the remainder of the season.

Kyle Trask finished the season as Florida's quarterback and led the Gators to an 11-2 record that included an Orange Bowl victory.

Because of last year's injury, Franks could apply for a medical hardship and get an additional year of eligibility.