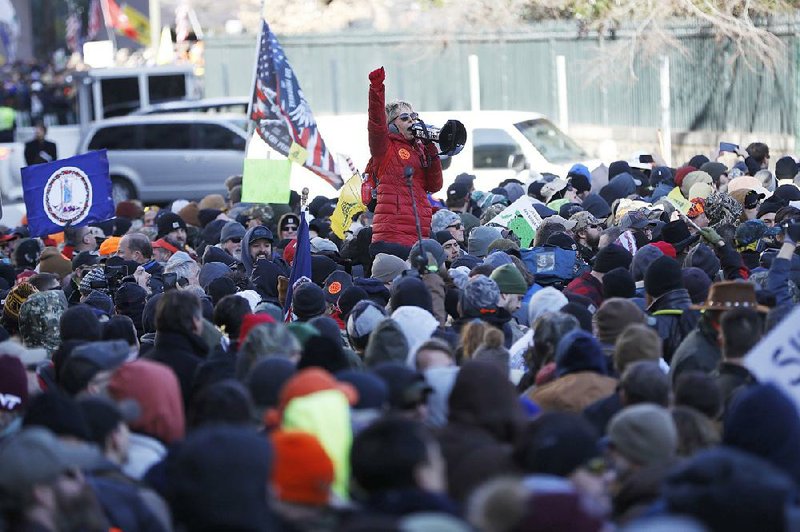 A woman speaks during a pro-gun rally Monday in Richmond, Va. More photos at arkansasonline. com/121virginia

RICHMOND, Va. -- Thousands of gun-rights activists from around the country, many of them armed, rallied peacefully at the Virginia Capitol on Monday to protest plans by the state's Democratic leadership to pass gun-control legislation.

The size of the crowd -- estimated at 22,000 -- and the expected participation of white supremacists and fringe militia groups raised fears that the state could see a repeat of the violence that broke out in 2017 in Charlottesville. But the rally concluded uneventfully around noon, and the mood was largely festive, with rallygoers chanting "USA!" and waving signs denouncing Democratic Gov. Ralph Northam.

Officers from the Virginia State Police, the Virginia Capitol Police and the Richmond Police Department patrolled the event and deployed on rooftops, but reported only one arrest: A woman who wore a mask in public. Police said they had previously warned her twice about her bandanna, which they said was a violation of a 1950s-era Virginia law aimed at unmasking the Ku Klux Klan. The felony charge carries a maximum of five years in prison.

The organizers of the rally, the Virginia Citizens Defense League, and other participants said they tried to keep the event peaceful. The group holds a yearly rally at the Capitol that usually draws only a few hundred gun enthusiasts, but Second Amendment groups have identified Virginia as a rallying point for the fight against what they see as a national erosion of gun rights.

The protesters came out despite frigid weather to send a message to legislators, they said. Many of them chose not to enter the designated rally zone, where Northam had imposed a temporary weapons ban, and instead packed surrounding streets.

Northam was a particular focus of the protesters' wrath. One poster showed his face superimposed on Adolf Hitler's body.

[Video not showing up above? Click here to watch » https://www.youtube.com/watch?v=THLDuhy35bE]

The governor said in a statement he was "thankful" the day passed peacefully and that "he will continue to listen to the voices" of Virginians while doing everything in his power "to keep our commonwealth safe."

"The issues before us evoke strong emotions, and progress is often difficult," Northam said.

Democratic lawmakers said the rally wouldn't affect their plans to pass gun-control measures, including universal background checks and a limit of one handgun purchase per month. Democrats say tightening Virginia's gun laws will make communities safer and help prevent mass shootings like the one last year in Virginia Beach, where a dozen people were killed in a municipal building.

"I was prepared to see a whole lot more people show up than actually did, and I think it's an indication that a lot of this rhetoric is bluster, quite frankly," said Del. Chris Hurst, a gun-control advocate whose TV journalist girlfriend was killed in an on-air shooting in 2015.

The center said attendees included members of the Oath Keepers, a Nevada-based group that promises to organize and train armed posses and militia; Three Percenters, a group that describes itself as working to "push back against tyranny" and whose name is derived from the notion that only 3% of American colonists fought against the British in the Revolutionary War; and the League of the South, which the center designates a neo-Confederate hate group.

But when the day ended with few incidents, House Republican Leader Todd Gilbert complimented the behavior of the rallygoers and said Democrats should take a lesson from them.

"The law-abiding gun owners in attendance today are the ones who would bear the brunt of their anti-gun proposals, which would have little to no impact on crime or criminals," he said in a statement.

In contrast to Charlottesville, there was little sign of counterprotesters challenging those in attendance.

A group of gun-control activists had initially planned to hold a vigil earlier Monday, but it moved the event to later in the afternoon after reports that white nationalists and militia members would attend the pro-gun rally.

Andrew Goddard, a gun-control activist, asked the group to have a moment of silence for the thousands of people who have been killed by gun violence.

"What would it be like if 10,000 of those people were standing with us and beside and behind us today?" Goddard said.

While the day was described as peaceful, Goddard said it did not feel peaceful to see so many armed people marching in the streets. "Intimidation is not peaceful."

But gun-rights rally attendees said they were alert for trouble. Vincent Carter, 36, who was picking up trash at the end of the event, said that participants were well aware that "the world was watching" and that any violence would have been blamed on gun-rights groups.

"A lot of time was spent in planning for safety -- to not let a certain type of person sort of mingle in with us," he said. "If we didn't know them, we didn't let them come with us. We have a lot of guys who are ex-military, so that helped keep things in order."

P.J. Hudson, a truck driver from Richmond who carried an AR-15 rifle just outside Capitol Square, was one of the few black rallygoers in a crowd that was overwhelmingly white and male, and was frequently stopped and asked to pose for pictures wearing his "Black Guns Matter" sweatshirt.

"I love this. This is like the Super Bowl for the Second Amendment right here," Hudson said.

"The government doesn't run us, we run the government," added Kem Regik, a 20-year-old private security officer from northern Virginia who brought a white flag with a picture of a rifle captioned, "Come and take it." Others on Monday also used the slogan, a reference to the warning used by Texan revolutionaries in 1835 when Mexican authorities demanded the handover of a cannon.

Some of the protesters waved flags with messages of support for President Donald Trump. Trump, in turn, tweeted support for their goals.

"I will NEVER allow our great Second Amendment to go unprotected," he tweeted Monday, "not even a little bit!"

David Triebs said he and his two sons drove for 24 hours straight through to Richmond from Fredericksburg, Texas, drinking Red Bulls to stay awake. He said relatives were worried about him going to Virginia.

"The internet stuff I read made it sound like tanks were rolling in the streets and neo-Nazis were marching and antifa has descended," he said. "But none of that stuff happened. It was like a family gathering."

As they packed up to leave after the rally, one of his sons struggled with two tall flagpoles, nearly knocking into a passing pedestrian.

"Careful -- don't hit anybody in the last five minutes," Triebs said. "If you assault someone with a flagpole, that would be the only thing that made the news."

Information for this article was contributed by Alan Suderman and Sarah Rankin of The Associated Press; and by Timothy Williams, Sabrina Tavernise, Zolan Kanno-Youngs and Sarah Mervosh of The New York Times. 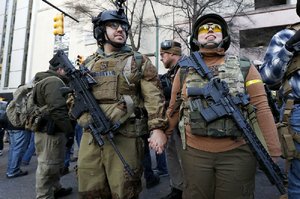 Photo by AP/Julio Cortez
Demonstrators stand outside a security zone Monday before a pro-gun rally in Richmond, Va. Video at arkansasonline.com/121rally