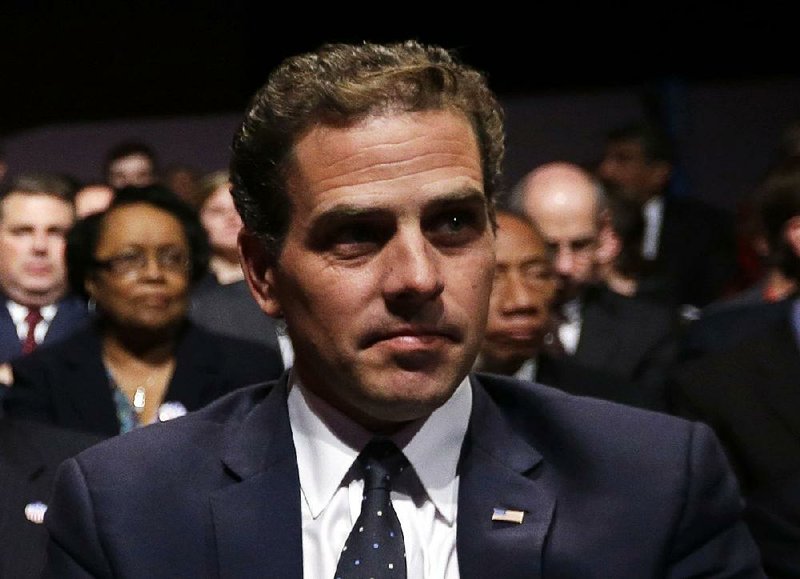 Hunter Biden must appear Jan. 29 in a Batesville courtroom and explain why he shouldn't be held in contempt for violating court orders to provide financial information in his Arkansas paternity case.

Independence County Circuit Judge Holly Meyer signed an "Order to Appear and Show Cause" on Monday, a day when Arkansas courts were closed to honor the birthday of Dr. Martin Luther King Jr. The judge's order was filed into the court record Tuesday.

The one-sentence order was prepared by Clinton and Jennifer Lancaster, attorneys for Lunden Alexis Roberts, the mother of Biden's 16-month-old child.

Biden, son of former Vice President Joe Biden, is being ordered to appear in the Arkansas courtroom days after President Donald Trump's impeachment trial began in the Senate. Hunter Biden has been mentioned as a possible witness in the impeachment proceedings.

Questions about Hunter Biden's finances, employment history and previous substance abuse have been raised by Republicans during the impeachment inquiry. Biden has defended his past business dealings, portraying criticism as politically motivated. His father, Joe Biden, is a contender for the Democratic presidential nomination.

Clinton Lancaster said the paternity case has nothing to do with the president's impeachment trial.

Also filed into the Independence County Circuit Court record Tuesday was a "Second Motion for Contempt and for Order to Show Cause" from Lancaster.

Hunter Biden "continues to act as though he has no respect for this court, its orders, the legal process in this state, or the needs of his child for support," wrote Lancaster, arguing that Biden should be found in contempt.

Lancaster filed his original "Motion for Contempt and for Order to Show Cause" on Dec. 23, saying Biden had missed deadlines to provide financial information on Dec. 12 and Dec. 19.

As an exhibit, Lancaster attached a Dec. 6 letter from Independence County Circuit Judge Don McSpadden addressed to Hunter Biden in Los Angeles. In the letter, McSpadden told Biden that he must file an Affidavit of Financial Means, but that it would be under seal.

"Plaintiff's apparent motivation by attaching the court's correspondence to defendant can only be concluded as an intentional disclosure to the media and political adversaries associated with the 'Where's Hunter?' campaign of his address," Langdon wrote. "Such intentional disclosure of the defendant's address has resulted in an onslaught of harassment of the defendant and his wife."

On Tuesday, Lancaster said Biden's street address was in an earlier court filing, so attaching the judge's letter didn't reveal something that wasn't already in the public court record.

Lancaster said Biden didn't have an attorney at that particular time, so McSpadden sent the Dec. 6 letter directly to Biden.

In his Jan. 8 response to Lancaster's initial Motion for Contempt, Langdon wrote that "to the extent possible [Biden] has complied with the court's orders" for the requested financial information. Langdon asked that the motion for contempt be dismissed, but it hasn't been, according to the court record.

The Jan. 29 hearing was already scheduled to address temporary child support and other matters, according to a Jan. 6 scheduling order from Meyer, who took over the case after McSpadden recused on New Year's Eve.

Lancaster emailed Meyer at 4:14 p.m. Monday saying he would file his attached Second Motion for Contempt with the court clerk on Tuesday. He also asked the judge if she was willing to sign an attached Order to Appear and Show Cause.

Langdon, who was copied in on the email, responded in an email at 5:29 p.m. Monday saying in reference to the Second Motion for Contempt: "I request that this filing be ordered filed under seal by the clerk in light of its reference to specific financial information, and in view of the protective order and the court's statements in our last hearing."

At 7:57 p.m. Monday, Lancaster responded in an email: "This pleading contains nothing about the content of any financial documents, only references what he has not provided. I don't think that this information is subject to being sealed."

Lancaster's Second Motion for Contempt hadn't been sealed as of late Tuesday.

Lancaster said he doesn't know why Biden doesn't just file the financial information, which will be kept under seal. Lancaster said Roberts has full custody of the child, and the court can't determine child support without knowing Biden's income.

"You would think the No. 1 thing he would want to do is shut up that annoying lawyer in Arkansas who keeps filing legal proceedings against him," Lancaster said.

In his Second Motion for Contempt, Lancaster wrote that Biden's evasiveness was "another example of the defendant's unnecessary actions to frustrate prompt adjudication of this matter and increase the plaintiff's litigation costs."

Langdon couldn't be reached by telephone or email Tuesday.

Roberts, 28, filed the paternity suit against Biden, 49, in May, seeking a determination of paternity as well as child support. A DNA test, conducted in November, showed "with near scientific certainty" that he is the father of the baby, Meyer declared in a Jan. 7 paternity order.