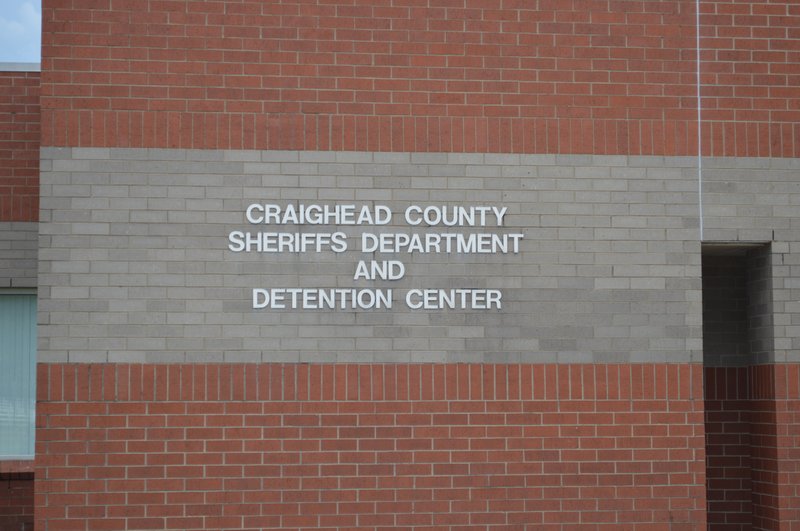 The Craighead County sheriff's office is shown in this file photo.

JONESBORO — A sheriff's deputy sustained minor injuries while exchanging gunfire with a man in northeast Arkansas after responding to a call about terroristic threats, authorities said.

Craighead County Deputy Sheriff Logan Dotson was struck in his head twice with shotgun pellets on Monday, shortly after he and Caraway Police Chief Shannon Kelems arrived to a home near Carraway, about 22 miles southeast of Jonesboro.

Officers were called after Eugene Junior Collins, 49, threatened to kill seven people inside, according to a probable cause affidavit. Collins put a gun to one of the victim's heads before the victim managed to escape.

Witnesses told deputies that Collins fired several times into the home, which still housed up to six people.

"Collins then retrieved a 12-gauge shotgun from inside his truck and fired at Deputy Dotson, striking (him) in the head area as well as Deputy Dotson's patrol unit. Chief Shannon Kellems' patrol vehicle was shot and damaged severely as Eugene Collins attempted to shoot at Chief Kelems," the affidavit read.

Deputy Dotson returned fire until Collins ceased shooting. He surrendered to authorities after a standoff that lasted about two hours.

Dotson has been released from the hospital after receiving treatment for the wounds, County Sheriff Marty Boyd said. He is on paid administrative leave.

Second Judicial District Prosecuting Attorney Scott Ellington said in court Tuesday that Dotson was "very lucky, an inch more and it would have killed him."

Collins is being held on a $5 million bond. Jail records don't list an attorney who could speak on Collins' behalf.