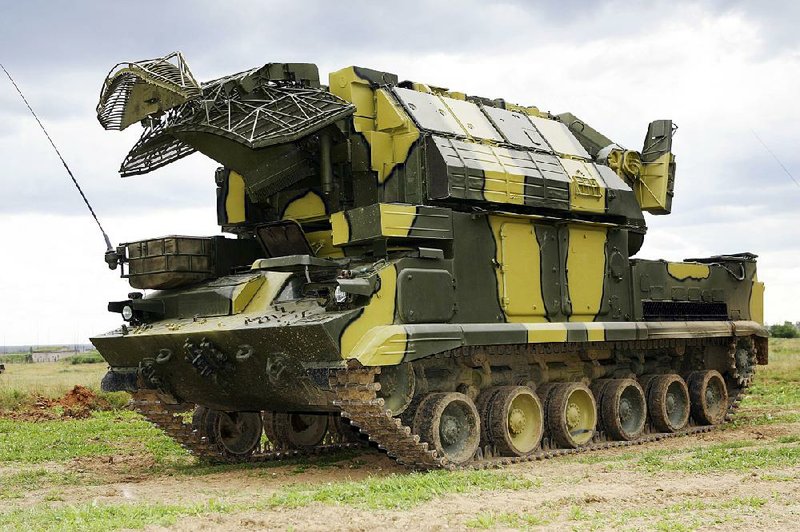 A Russian Tor-M1 missile system sits in an undisclosed location in this 2005 photo. A report from Iran said a similar system supplied by Russia was used in the mistaken downing of a Ukrainian jetliner earlier this month. (AP file photo)

BEIRUT -- Iran acknowledged Tuesday that its forces had fired two surface-to-air missiles at a Ukrainian passenger plane that crashed this month near Tehran, confirming for the first time that more than one missile was blasted at the jet.

Iranian authorities also asked officials in the United States and France to send the equipment needed to decode the jet's flight data recorders, or "black boxes," a request certain to frustrate countries that have called for greater international involvement in investigating the disaster, which killed all 176 people onboard.

The downing of Ukraine International Airlines Flight 752 on Jan. 8 occurred during heightened tensions between Iran and the United States that included military strikes, and after the killing of the top Iranian security commander, Gen. Qassem Soleimani, in a U.S. drone strike at the Baghdad airport. Soleimani had been declared a terrorist by the U.S. State Department.

The Iranian government announced later Tuesday that it was establishing a Soleimani Prize to be awarded on an international level, the official IRNA news agency reported without elaborating.

The plane was shot down the same day Iran fired missiles at two military bases in Iraq that house U.S. troops, in retaliation for the killing of Soleimani. After days of denials, Iranian officials acknowledged that the downing was the result of "human error," prompting angry protests across Iran.

A preliminary report from Iran's Civil Aviation Organization, released Tuesday, corroborated a video that showed two missiles, fired from a military site, exploding near the plane.

The two minutes of black-and-white footage purportedly shows one missile streaking across the sky and exploding near the plane. Ten seconds later, another missile is fired. About 20 seconds after the first explosion, another strikes near the plane. A ball of flames then falls from the sky out of the frame.

The fire from the explosion, however, appears not to have reached inside the cabin, the report said, citing the condition of debris later recovered from the crash site.

The new report identified the missiles fired at the aircraft as coming from the Tor-M1. In 2017, Iran received the delivery of 29 Tor-M1 units from Russia under a contract worth an estimated $700 million.

The Tor short-range air-defense system, code-named the SA-15 by NATO, was designed during Soviet times to shoot down aircraft and precision guided weapons.

It is mounted on a tracked vehicle and carries radar and a pack of eight missiles. Each vehicle can operate independently. Tor has a range of up to 7.5 miles and can hit aerial targets at altitudes of up to about 19,700 feet.

The crash's victims included 82 Iranians, 57 Canadians and 11 Ukrainians, with the international manifest heightening calls for an international investigation. But many have accused Iran of dragging its feet, a complaint likely to be bolstered by the suggestion Tuesday that the plane's black boxes would be analyzed in Iran instead of being sent abroad.

The Iranian aviation organization said that it had asked American and French aviation authorities to provide the equipment needed to decode the data recorders on the Boeing 737, because it did not have that technology.

"If the appropriate supplies and equipment are provided, the information can be taken out and reconstructed in a short period of time," the agency said in its report. "Until now, these countries have not given a positive response to sending the equipment."

That appeared to contradict a statement by Hassan Rezaifar, a head investigator for the same organization, who on Saturday said the jet's data recorders would be sent to Ukraine at the request of the country's authorities.

Iran's apparent backtrack adds to the growing impatience by countries whose citizens were on the plane, particularly Canada and Ukraine, for access to the recorders.

It also appeared odd that Tehran would request help from the United States, a longtime adversary. The U.S. has embarked on a campaign of "maximum pressure" against Iran, including stepping up sanctions that have prevented Iran from importing sensitive technologies.

Ukrainian officials have repeatedly called for Iran to hand over the recorders and accused it of violating protocols for accident sites by bulldozing debris from the crash before the investigation was complete.

Canada, too, has criticized Iran's level of cooperation, and Prime Minister Justin Trudeau has said Iran should give the recorders to France for analysis.

There was no immediate comment from officials in the United States, Canada or Ukraine about Iran's equipment request.

Meanwhile, a little-known Iranian lawmaker was quoted as offering a "$3 million cash prize for anybody that would kill [President Donald] Trump," apparently in retaliation for Soleimani's death. It wasn't clear where Ahmad Hamzeh, a lawmaker for the town of Kahnouj in Kerman province, believed the money would come from, though he implied the province would offer the cash.

In other developments Tuesday, the South Korea Defense Ministry announced that its anti-piracy unit operating in the Gulf of Aden was temporarily expanding its mission to the Strait of Hormuz. A ministry statement said the decision was meant to help ensure the safe passage of South Korean vessels and citizens through the waterway. It said the unit's expanded operation will include the Gulf of Oman and the Persian Gulf.

The ministry said the unit will conduct an independent operation but will cooperate with a U.S.-led coalition if necessary. Already, a U.S.-led operation is surveilling the strait, the narrow mouth of the Persian Gulf through which 20% of all the world's oil passes. A French-led naval coalition also is being created.

The missions began after mysterious explosions last summer targeted oil tankers near the strait, attacks the U.S. blamed on Iran. Tehran denied being involved, though it did seize tankers during wider tensions with the West over its unraveling nuclear deal with world powers.

Information for this article was contributed by Ben Hubbard of The New York Times; by Paul Schemm of The Washington Post; and by Jon Gambrell and Hyung-jin Kim of The Associated Press.