Walker: UALR is place for me 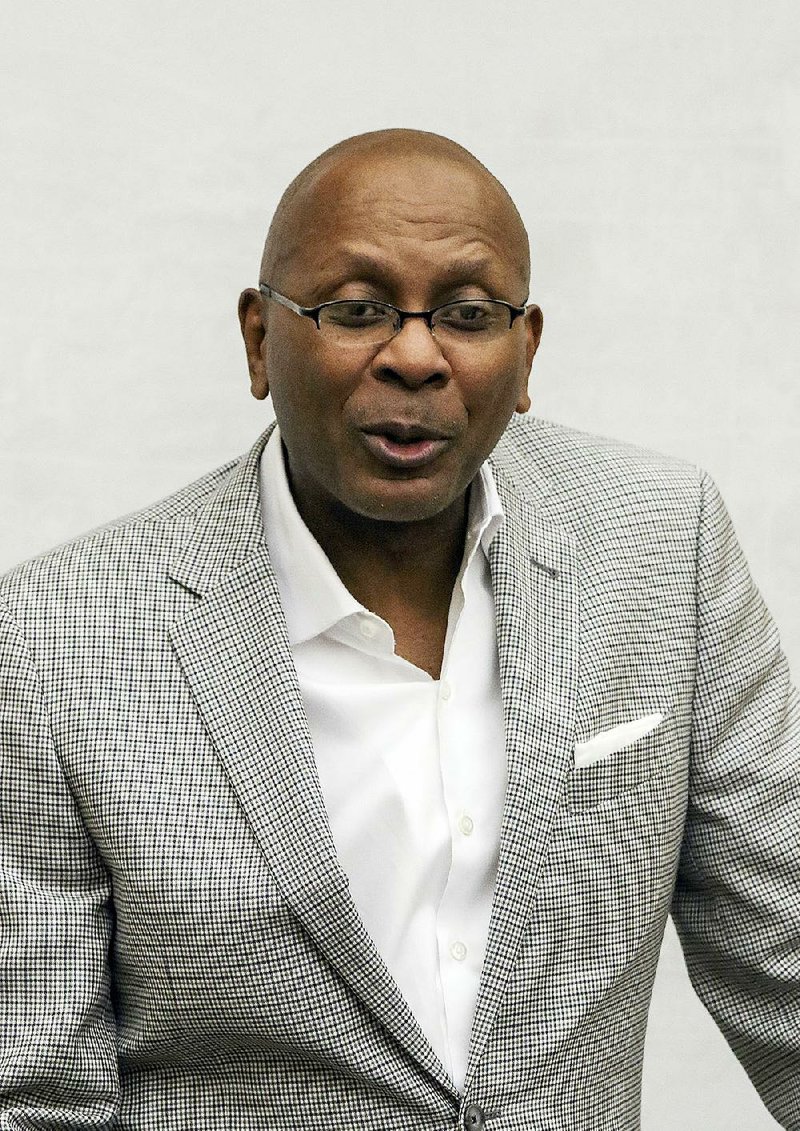 There was plenty of time spent recounting old memories from his wide-ranging basketball career, one that involved him becoming a household name in this state decades ago before he reached NBA heights as a player and coach.

But there was one thing Darrell Walker, the University of Arkansas at Little Rock men's basketball team's second-year coach, wanted to make clear Tuesday about this particular chapter in his career.

"This is home for me," said Walker, who spoke at the weekly Downtown Tip Off Club inside the North Little Rock Chamber of Commerce. "This job right here, I'm not trying to go anywhere, and I know people say that all the time. I'm serious about that."

The room full of dozens of club supporters broke into applause before the coach could finish his answer to a question. Many in the crowd donned University of Arkansas Razorbacks apparel -- the school where Walker was a star in the early 1980s.

"I want to do about 10 years here -- if [UALR Athletic Director] George [Lee] will let me do 10 years -- and I can settle into a fundraising job for the school," Walker said with a smile.

If UALR continues on its current trajectory, the 58-year-old Walker eventually may garner interest from other programs. So far, his rebuild in Little Rock is gaining steam.

The Trojans (13-7, 7-2 Sun Belt) head into tonight's home game against Troy sitting in sole possession of first place in the Sun Belt Conference standings, an improbable turnaround for a team that finished 10-21 and tied for last in the league at 5-13 a season ago. The Trojans were picked 11th out of 12 in this year's preseason coaches poll.

It's the result of a roster that was retooled in the offseason, and a culture and playing style that fit Walker's hard-nosed personality. There's growing buzz with the Trojans again, something the program hasn't felt since their 2015-16 run under former coach Chris Beard, who is now at Texas Tech.

Walker appears hellbent on not just turning the program into a winner again but also sustaining it for years to come.

"Even before Chris Beard got the job, I thought it was a sleeping giant," Walker said. "I thought somebody could come in here, if they really wanted to come in and stay here, they could get it done, they could get people in the stands and it could be a great basketball city. There's no doubt about that.

"[There's] room for the University of Arkansas, but there's also room for UALR."

The Razorbacks legend and NBA veteran has done enough within the game of basketball to merit much longer than his roughly 40-minute speaking session Tuesday. He spent plenty of time looking back at a basketball career that has led him to this point.

The Chicago native said he initially did not want to attend Arkansas, instead wanting to play for DePaul in his hometown. But legendary coach Eddie Sutton persuaded him to come to Arkansas, and Walker called the decision to go to Fayetteville "the best thing that could have happened to me."

Walker spoke with great admiration and fondness of his college coach, who is now 83 and in deteriorating health.

Sutton's impact was one of the reasons why Walker -- who coached the Toronto Raptors and Washington Wizards and spent many other years as an assistant in the NBA -- decided to dive into the college coaching scene in 2016 at Clark Atlanta University, a private Division II school.

"I wanted to coach in college. I wanted to touch guys' lives just like Eddie Sutton touched my life," Walker said. "If it wasn't for coach Sutton, I don't know where I would be right now."

Asked what's the difference between coaching in college vs. the NBA, Walker didn't hesitate.

"Players don't cuss back in college," he said.

Just like Sutton built winners in the college ranks at the likes of Creighton, Arkansas, Kentucky and Oklahoma State, Walker is striving to do the same at UALR.

The Trojans are far from a basketball blueblood, but to Walker it doesn't matter. This is home, and this is where he believes he's supposed to be.

COACH Scott Cross (8-12 in one season at

CHALK TALK Troy won the first meeting this season, 76-71, on Jan. 9 in Troy, Ala. … UALR has won back-to-back games over Coastal Carolina and Appalachian State — the first time in program history the Trojans have swept the Carolina road swing — to regain sole possession of first at 7-2 in the Sun Belt Conference standings. … UALR sophomore point guard Markquis Nowell (hamstring) remains questionable to play and has missed three of the past four games.

Print Headline: Walker: UALR is place for me