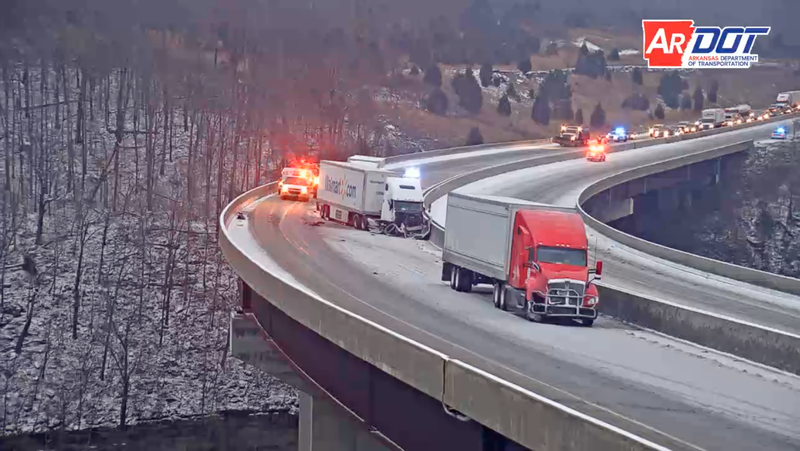 This photo from an Arkansas Department of Transportation camera shows a wreck blocking Interstate 49 on Wednesday morning.

A storm system that brought snow and sleet to much of western Arkansas on Wednesday morning continued to make its way east across the state, but precipitation at noon was largely limited to rain, forecasters said.

Portions of the state along the border with Oklahoma saw the greatest amounts of snow and sleet accumulation, according to National Weather Service meteorologist Jeff Hood. One site in western Polk County had close to an inch of accumulation, Hood said. In Van Buren, the weather service reported roughly 1.5 inches of accumulation.

The state Transportation Department reported that much of the ice and snow found on western Arkansas roads earlier in the morning had been reduced to slush or dissipated entirely.

In Washington County, the northbound lanes of Interstate 49 were closed for just over two hours after a person in a vehicle became trapped between two trucks, according to the state Department of Transportation. Agency spokesman Danny Straessle said at least one person was injured in the crash, which was cleared at about 9:35 a.m.

A number of schools in western and Northwest Arkansas were closed or delayed because of the weather Wednesday.

Rain, sleet and freezing rain were reported across parts of central Arkansas on Wednesday morning, but forecasters didn’t expect to see any major impacts in the area.

On Thursday evening, northern Arkansas could see some light snowfall as the storm system leaves the area, according to Hood. “Nothing’s very clear,” however, about what the state could expect over the next 24 hours, he said.

“It’s always difficult to convey a forecast like this and we’ll just be excited when this finally moves out of the area,” Hood said.

Rain and sleet was falling at the North Little Rock Airport, the weather service reported just before 10:20 a.m. The agency reported the temperature at the airport was 33 degrees.

The northbound lanes of Interstate 49 in Washington County have been cleared, according to the Arkansas Department of Transportation.

The highway agency reported the crash was cleared at about 9:35 a.m. At about 7:15 a.m., a person in a vehicle became trapped between two trucks, resulting in injuries, officials said.

Portions of Central Arkansas may still see a brief period of sleet, but any precipitation is expected to transition to rain, meteorologist Jeff Hood said. Freezing rain was reported in Hot Springs at about 9 a.m., and sleet was also reported in Benton and Bryant, according to the weather service.

Traffic is slowly moving again along northbound Interstate 49 in Washington County after at least one lane was cleared, according to the state Department of Transportation.

The highway agency reported just before 9 a.m. that I-49’s inside lane and left shoulder remained blocked near West Fork. The crash happened at about 7:15 a.m., when a person in a vehicle became trapped between two trucks, resulting in injuries, according to spokesman Danny Straessle and a transportation department report.

A highway agency camera appeared to show at least one lane of vehicles moving past the scene of the wreck at about 9 a.m.

The Arkansas Online live traffic map showed a significant backup in the area. 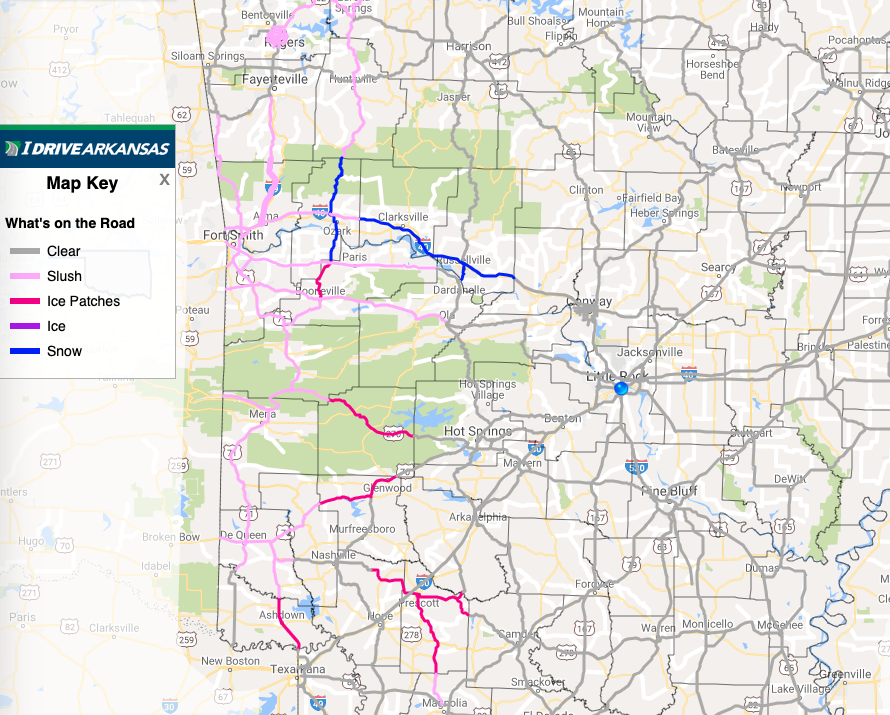 This screenshot of the Arkansas Department of Transportation's IDriveArkansas.com map shows reported conditions on highways shortly before 9 a.m.

The northbound lanes of Interstate 49 remain blocked in Washington County after a crash trapped a person in a vehicle between two trucks, according to the state Department of Transportation.

Straessle said drivers in the area should “absolutely not” consider taking a detour because the most significant efforts to clear roads have been on primary highways, such as interstates. Less-traveled roads may be untreated, so drivers should instead wait for the interstate or other major roads to clear.

“If you’re traveling that direction, just delay your travel until we can get this cleared and open the lanes back up.”

Straessle said he didn’t immediately know when the interstate would reopen.

The highway agency reported snow, slush, ice and ice patches on a number of major highways in the western half of Arkansas as a wintry system continued moving east through the state. Drivers should be aware of rapidly changing road conditions, according to Straessle.

“It’s quite a mixed bag out there,” he said.

A winter weather system is predicted to bring a chance of snow and sleet to the Little Rock metro area between 9 and 10 a.m., and snow was expected in Hot Springs by around 8 a.m., forecasters said.

Meteorologist Jeff Hood said the system is predicted to move into western portions of Pulaski County as early as 9 a.m. In the Little Rock area, residents could see a “brief period of winter weather,” beginning with snow and sleet, Hood said. As temperatures increase, the precipitation is expected to turn into cold rain. 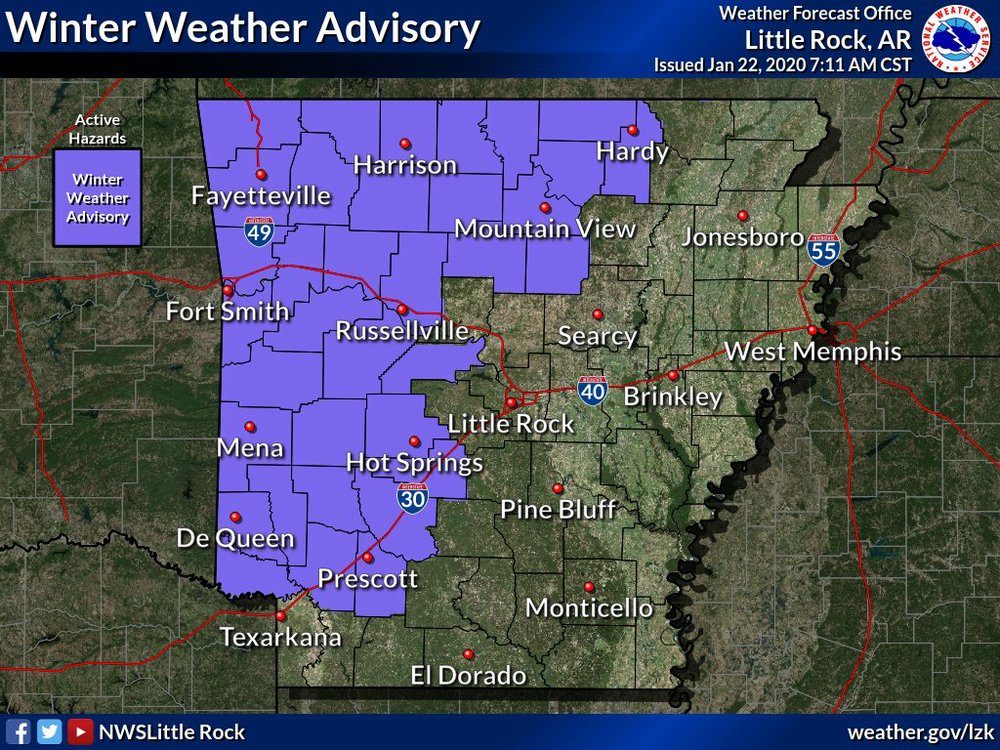 This National Weather Service graphic shows a winter weather advisory across much of the western half of Arkansas on Wednesday.

A winter weather advisory scheduled for Wednesday has expanded eastward, covering much of the western half of Arkansas, forecasters said.

Light snow and sleet was predicted in areas across the state, according to the National Weather Service. The latest update shortly before 7 a.m. added Perry, Garland, Pike, Clark and Hot Spring counties to the previously issued advisory.

Forecasters said snowfall of up to an inch and freezing rain of up to a quarter of an inch was possible across more elevated portions of the Ozarks, Ouachitas and north-central Arkansas. Up to two inches of snowfall is also possible in isolated areas, the weather service said.

Many roads in western Arkansas were reported to be covered in snow and patches of ice, a state Department of Transportation map shows.

A number of schools in western and Northwest Arkansas were closed or delayed because of the weather Wednesday. 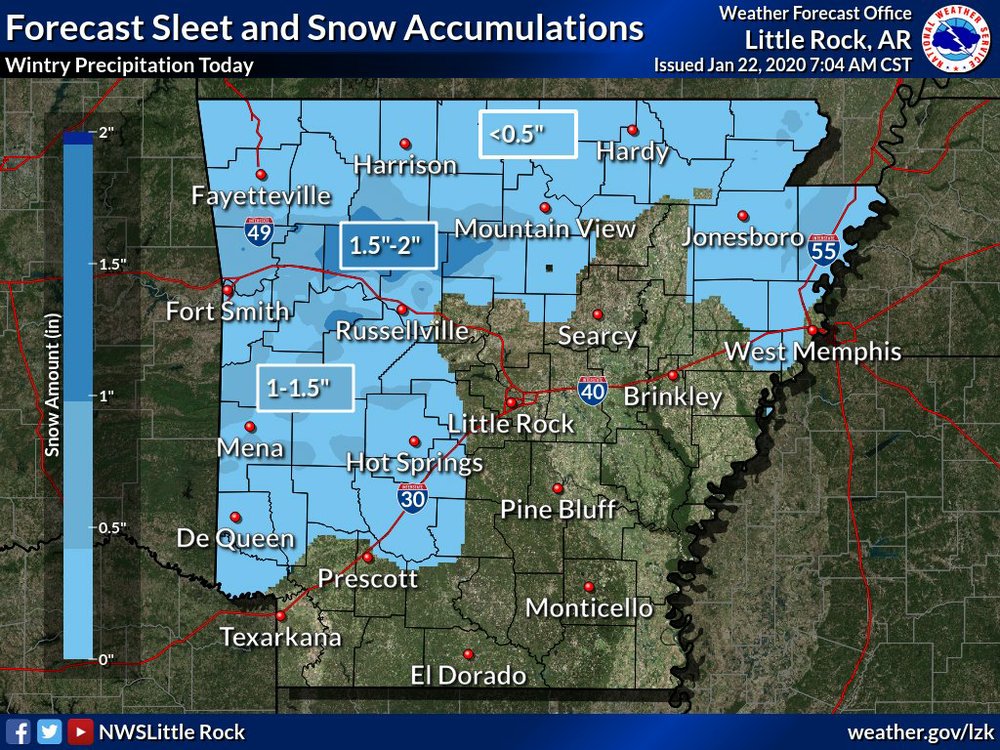 Up to two inches of snowfall is possible in isolated portions of Arkansas on Wednesday, according to this National Weather Service graphic.
ADVERTISEMENT