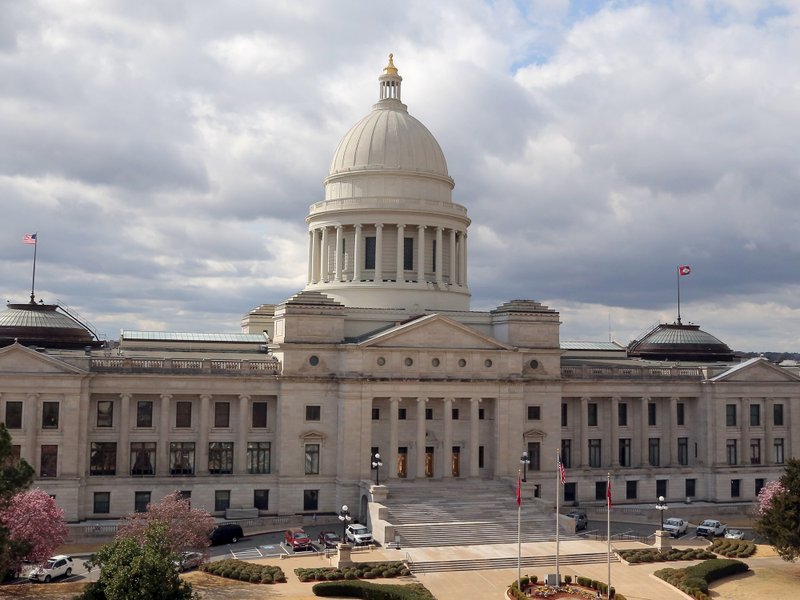 The Arkansas Capitol is shown in this file photo.

The secretary of state's office has ditched a plan to allow the distribution of electronic access cards to people who don't work in offices in the Capitol building but are sponsored by a state lawmaker or constitutional officer.

The card allows the bearer to avoid going through the metal detectors at main entrances of the Capitol.

The sponsorship practice was to be continued under the version of the access card policy that officials in the secretary of state's office implemented Nov. 1 and presented to the Senate Efficiency Committee the same month.

At that time, several senators suggested ending the practice, saying they were surprised that lawmakers were able to obtain cards for lobbyists and others whose offices aren't in the Capitol.

"We got an understanding from the members of the Senate that y'all really didn't like that idea, so we have taken that completely out," Capitol Police Chief Darrell Hedden said Wednesday during a joint meeting of the Senate Efficiency Committee and House Management Committee. He said the updated policy will be implemented soon.

The aim of the revised policy is to limit the number of people avoiding the metal detectors, according to officials working for Secretary of State John Thurston. The office oversees security at the Capitol.

Hedden said Thurston's predecessors "have never really had a written-down policy, and now this administration, along with us, is trying to place something in writing to give us more control or accountability on knowing who comes and goes from the building.

"In previous administrations it was like ... you go to an elected official, mainly the secretary of state's office, and say, 'I would like to get a card'" for someone not employed at the state Capitol, and "they would send a message to me or call me directly [to] give the person a card," he told the House and Senate committees.

"Y'all have probably seen a lot of people come and go around here that were previous legislators, previous speakers of the House, [who] now work in firms that deal directly with the Legislature and legislation and they had access to the building" without going through the detectors, Hedden said.

"Now, we have been eliminating all of that," he said.

Sen. Mark Johnson, R-Little Rock, pressed Hedden about whether Thurston's office is phasing out electronic access cards to former legislators who may be liaisons or lobbyists to the Legislature.

"I did have a constituent who made some comment once of someone coming in the security door and not going through the metal detector down in the tunnel, [and then that person said,] 'Lobbyists shouldn't be allowed to do it,'" Johnson said.

"I'm just quoting what they said," he added.

Senate Efficiency Committee Chairman Linda Chesterfield, D-Little Rock, said those individuals still will be able to access the east and west entrances to the state Capitol "where we have security" and will have to go through metal detectors.

"That does not preclude folks from coming into the Capitol because we keep in mind that this is the people's house," she said.

She said senators also have been concerned about the number of people without cards entering through the Capitol's north and south entrances, which lack metal detectors. Those people are being allowed into the building by cardholders.

"In our previous discussions, we were talking about a lot of cards being out there, so we've been in a process of cleaning all that up, plus [the cards] have been expiring as well, so that should cut down on a lot of activity at the north and south doors for people who don't have a card," Hedden said.

"We do have new cameras that are looking at those doors," he said. "This time of the year, only employees will have access."

"During the session, it gets a little more hectic and a lot of more traffic and a lot of people in the area, so we might update to place an officer in that area during the high-volume times at both locations," Hedden said.

Three Arkansas Democrat-Gazette Capitol bureau reporters, who work in an office in the building, have these electronic access cards.

The secretary of state's office on Wednesday declined to disclose to the newspaper a breakdown of those who have the cards -- elected officials and people who work in offices in the building compared with those who don't.

"The requested ... information is exempt from the Freedom of Information Act pursuant to the Capitol Police exemption, for security reasons," said Chris Powell, a spokesman for the secretary of state's office.

Asked to elaborate on how the release of this information would jeopardize security at the state Capitol, Powell replied, "We have no further comment."

During the meeting of the House and Senate committees, Hedden said people who have lost their security access cards have been able to get replacements from the Capitol Police.

"That got to be very, very expensive," he said.

"These cards that we issue out are around $15 a card," he said. "There have been different agencies that have individuals that lose cards quite regularly, and it got to the point we had to do something. So under the draft policy, if you work in the building, we will give you a card, just like they do at high schools and junior high schools now.

"But there has got be some teeth in the game for everyone, so if you lose a card, misplace it, [or it's] stolen, it is going cost you $15 to replace the card," Hedden said. "If it's a malfunctioned card or fails to work and you bring it back to us, we'll replace it for nothing."

Dwight Southerland, the secretary of state's chief of staff, said a new employee or lawmaker will have to fill out an application form for a card.

A person not based in the Capitol -- a state employee or a contractor -- may obtain a card if the person is doing a specific job for an office in the building, Hedden said. They, too, will fill out the form.

He also said the secretary of state's office is proposing policy changes for access to the apartments in the Capitol Hill building. The office rents apartments to some lawmakers.

Lawmakers also will be required to have access cards instead of punching in numbers on a keypad to enter the building, Southerland said.

"That is the only way that we know of that we can propose to maintain security in the Capitol Hill building," he said.

"I can guarantee I could go over there not knowing anything and within 15 minutes get into the building just by using a keypad," Southerland said.