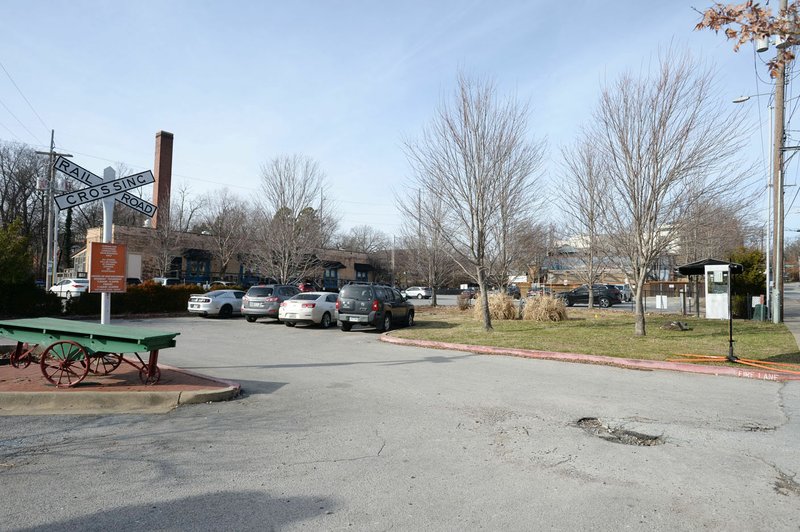 Cars are parked Tuesday at the depot parking lot on West Avenue in Fayetteville. The City Council selected the site as the potential location for a new parking deck downtown. (NWA Democrat-Gazette/Andy Shupe)

FAYETTEVILLE -- A lot of details need to be worked out before the city agrees to build a parking deck at the depot lot downtown, City Attorney Kit Williams said.

Williams got the go-ahead Tuesday from the City Council to negotiate with the owners of 2.4 acres at the northwest corner of Dickson Street and West Avenue. Greg House, through his Fayetteville Depot LLC, owns 1.6 acres of it. The Bank of Fayetteville owns 0.8 acres.

For more information on the cultural arts corridor, including the parking deck, go to:

Do you agree with the proposed placement of the downtown parking deck?

Voters in April approved a $31.5 million bond issue for a cultural arts corridor downtown. Included in the bond issue is a parking deck for $10 million to replace the 290 spaces lost when the Walton Arts Center parking lot becomes a green space.

City staff recommended the deck be built at the depot lot. Voting against the location would have prompted staff to pursue building the deck on North School Avenue, across the street from the Spring Street deck.

The council voted 5-3 to follow up on a letter of intent worked out by real-estate broker Sterling Hamilton between the city and landowners of the depot lot. Sarah Marsh, Matthew Petty, Sloan Scroggin, Sarah Marsh and Kyle Smith voted in favor. Sonia Gutierrez, Mark Kinion and Teresa Turk voted against.

Under the proposal the council saw Tuesday, a five-level parking deck would sit on 0.3 acres, with commercial space filling the first floor. The 400-space deck would be east of Arsaga's, with an alley separating the two structures. A five-floor hotel would sit at the southeast corner of the lot, with the Bank of Fayetteville inside. The depot building would remain at the southwest corner.

About 20 people spoke about the deck at Tuesday's meeting. Opinions on its location varied. Some residents questioned the wisdom of the land swap deal with a private developer and the logic of the location itself. Others said building a hotel and having options for other developments at the depot lot could bring more vibrancy and economic impact downtown.

Council Member Matthew Petty said he didn't like optics of the land swap, but he could overlook it because of the potential benefits of the deal overall. Some aspects, such as having a transit hub north of Arsaga's, made the proposal stand out over School Avenue option, he said.

"I don't see it as advantageous for the city to spend the same amount, or more, money on another lot, and then have to continue to work out another set of deals to get the same impact," Petty said.

The City Council can reject the contract Williams is going to negotiate. In that instance, the city would have options, Williams said.

Building the deck at the green space could be a third option, Williams said. The city owns the lot, and its flat surface and lack of structures would make construction easier than the other two locations, he said.

Williams said he had issues with the letter of intent. The parking deck, for instance, could end up serving hotel employees and guests instead of the public, he said. He and several of the council members shared concerns about the land swap, saying it appeared House was getting the better end of the deal.

Williams said he plans to update the council on the progress of the negotiation during its meeting Tuesday.

"I'm not drafting a contract," he said. "I'm still trying to figure out what the terms are."

Peter Nierengarten, the city's director of sustainability and parking, said although putting the parking deck at the green space would be legally possible, it wouldn't be practical. Voters approved the arts corridor bond issue after seeing concepts with the majority of the Walton Arts Center parking lot space turned into a space with buildings on the north and south ends, he said.

"We spent about $350,000 on a schematic design," Nierengarten said. "A schematic design that does not show a parking deck on the civic plaza is what the citizens of Fayetteville voted on as part of the bond last April."