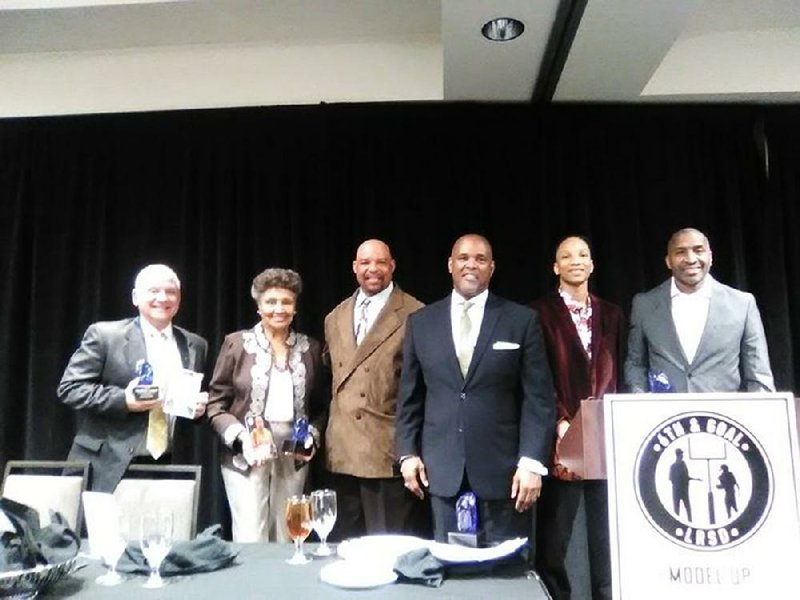 Even though he wasn't present at the second annual Little Rock School District One Rock Legends Hall of Fame ceremony, Bernie Cox's presence was felt.

The longtime Little Rock Central football coach was one of seven inductees into the school district's athletic Hall of Fame on Wednesday, but he didn't attend because of an illness. He led Little Rock Central to seven state championships from 1975-2009.

Cox passed along his speech to his son Brian, who read it to the crowd gathered at the Embassy Suites in Little Rock. Bernie Cox credited his former players, coaches, athletic trainers and administrators for him reaching the Hall of Fame.

"It takes a family to be successful," said Brian Cox, reading his father's speech. "We were lucky to have had the family that we did for 35 years. I was just one of many who made up that family for so many years. This honor is accepted on behalf of every member of that family."

One of Cox's former players, Marcus Elliott, cherished the time he played for the Tigers and Cox in the 1980s.

"He's impacted a lot of lives," said Elliott, who played at the University of Arkansas and was also inducted into the Hall of Fame on Wednesday. "He's a wonderful person who changed my life."

Fisher was a five-time NBA champion (2000-02, 2009, 2010) with the Los Angeles Lakers. He also played for the Golden State Warriors, Utah Jazz, Oklahoma City Thunder and Dallas Mavericks. He currently is the head coach for the WNBA's Los Angeles Sparks.

In a video message, Fisher said he was proud to be a part of the Little Rock School District.

"Growing up there in Little Rock, I have so many memories and knew so many special people," Fisher said. "Nothing really works well in life without a solid foundation. Little Rock provided that foundation for me. I had so many teachers, coaches and impactful people changed my life for the positive.

"I miss you guys. I wish I could be there with you today."

Bill Keopple appreciated the induction of his father, and he believes the Little Rock School District -- which has not had a state championship football team since Little Rock Central in 2004 under Cox -- still can produce football powers like the ones that existed when his father coached.

"I am so honored, so pleased and so proud for this honor for him. I wish he could be here to see it," Keopple said. "I can tell you this, you have a fan in Magnolia, Arkansas, for the Little Rock School District. I'm pulling for y'all to make this thing great again.

"The athletics in the Little Rock School District is so critical to bringing a school district together in the right way. The pride of the community and the state is watching you. I'm watching you. I'm pulling for you."

During his speech, O'Neal credited CW Keopple and basketball coach Oliver Elders for making him into the athlete he became.

"I got lucky and went to Hall," O'Neal said. "You played all of the sports. Now, you just specialize in sports. I wouldn't be here if it weren't for these guys."

Scaife's brother, Tracy, accepted the honor on behalf of his sister Wednesday.

"Playing basketball was Tyler's lifelong dream," Tracy Scaife said of Tyler, who won a Class 6A state championship in 2013 at Little Rock Hall. "As a child, she would go outside and shoot baskets. As she got older, she would spend hours in the gym, earning the name gym rat. When she returned home for the holidays after saying hello to family and friends, she would say, 'I have to go to the gym.' "

Washington paid tribute to his former high school basketball coach at Little Rock Parkview, Charles Ripley, who is battling prostate cancer. Ripley was in attendance Wednesday in support of Washington and Fisher.

"Coach Rip, he was the first one who believed in me," Washington said. "I'm super glad to see him. It's been a long time. That bond will never be broken."

Little Rock School District Superintendent Michael Poore said it's important for the district to celebrate its past athletes and coaches.

"If you honor your past, it allows you to set trajectory toward your future," Poore said.