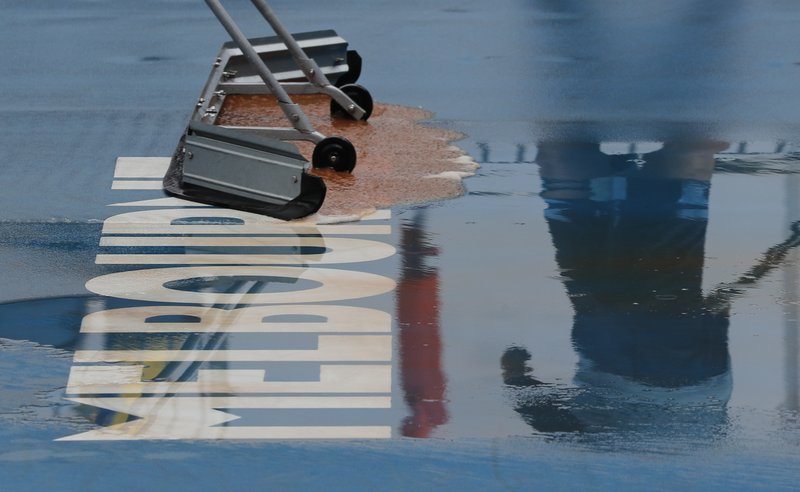 Ground staff clear and dry the outside courts after rain delayed play during a second round singles match at the Australian Open tennis championship in Melbourne, Australia, Thursday, Jan. 23, 2020. (AP Photo/Andy Wong)

MELBOURNE, Australia -- Red dust and rain combined to give some of the blue courts at the Australian Open a more Roland Garros hue, adding yet another element to the freakish conditions that have plagued the first four days of the tournament.

Smoke from devastating bush fires on Australia's east coast caused air quality in Melbourne last week to be ranked among the worst in the world, and impacted on qualifying.

So far this week, rain on three of the first four days of the tournament has caused more difficulties for players and organizers.

Play was delayed on outside courts Thursday by more showers and what a weather expert called "dirty rain" that left red dust covering some outside courts at Melbourne Park and turned the water in the Yarra River which winds between the tennis complex and the city deep brown.

Melbourne Park staff used high-pressure hoses to clean court surfaces. Light rain became heavy, forcing the suspension of play on outside courts until the sun came out in the mid-afternoon.

On the plus side, there are three stadiums with retractable roofs, so the show courts will go on.

Fourth-seeded Daniil Medvedev needed a medical timeout for a nose bleed before beating Spanish qualifier Pedro Martinez 7-5, 6-1, 6-3 and advancing to the third round.

The U.S. Open finalist called for a medical timeout while leading 5-0 in the second set and needed treatment to stop the bleeding.

"I'm super happy to get the match out of the way. I didn't know the courts were, like, wet and dirty and all that," Bencic said. "But for sure it was difficult today. It was sometimes sunny and then suddenly was almost raining. Then windy. Yeah, you just kind of have to accept it and go with it and try your best."

Serena Williams moved a step closer in her bid for a record 24th major title with a 6-2, 6-3 win over Tamara Zidansek to reach the third round.

Williams won the last of her seven Australian Open titles in 2017, but hasn't added a major championship since then. She took time off the tour to have her daughter, Olympia, and has lost four Grand Slam finals in the last two seasons. Her title in Auckland, New Zealand recently was her first at tour-level in almost three years.

The 38-year-old Williams dominated in the first set but was slowed down slightly in the second, when the roof was closed because of rain, and the 70th-ranked Zidansek saved the first seven break-point chances she faced.

"I knew I had to step up, otherwise it was going to be a really long evening for me," Williams said.

It's been two full years since CiCi Bellis was healthy enough to participate in a Grand Slam tournament.

And now, four arm operations later, the 20-year-old Californian is back -- and has beaten a seeded opponent to reach the Australian Open's third round.

Bellis was a teen prodigy, winning a U.S. Open match at age 15 and reaching No. 35 in the rankings at 17. All the time away from the tour because of injuries has her at No. 600 right now, but she was able to get into the draw at Melbourne Park via the protected ranking rule.

"I'm happy to get through -- this was an ugly match for me," Pliskova said.

Muguruzu had to wait for the stadium roof to be closed in the third set of her win, and said the need to stay patient was crucial in the tough win. On Melbourne Arena, 19th-seeded Donna Vekic beat Alize Cornet 6-4, 6-2.

Bureau of Meteorology senior meteorologist Richard Carlyon told the Australian Broadcasting Corp. the brown rain was the result of the rain front moving through a dust storm northwest of Melbourne, and not from bushfire smoke.