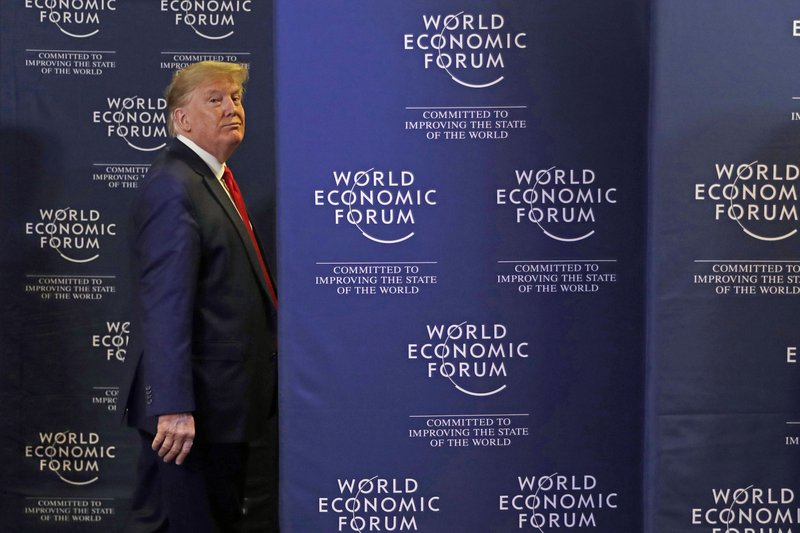 WASHINGTON -- President Donald Trump suggested Wednesday that he would be willing to consider cuts to social safety-net programs such as Medicare to reduce the federal deficit if he wins a second term.

The president made the comments on the sidelines of the World Economic Forum in Davos, Switzerland. Despite Trump's promises to reduce the federal budget deficit, it has increased under his watch.

Asked in an interview with CNBC whether cuts to entitlements would ever be on his plate, Trump answered yes.

"At some point they will be," Trump said, before pointing to U.S. economic growth. "At the right time, we will take a look at that."

Trump suggested that curbing spending on Medicare, the government health care program for the elderly, was a possibility.

Trump said tackling entitlement spending was "the easiest of all things" and suggested that higher economic growth would make it easier to reduce spending on the programs.

Asked for clarification after the interview, White House spokesman Judd Deere noted that there had been "no benefit cuts" under Trump.

[Video not showing up above? Click here to watch » https://www.youtube.com/watch?v=yK21cZUKjd8]

The statement said the president is not pushing "benefit cuts," but rather that the administration would aim to eliminate things like "waste" and "fraud" in the programs.

"President Trump is keeping his commitment to the most vulnerable Americans especially those who depend on Medicare and Social Security," the statement said. "His budgets have proposed more savings to mandatory programs than any President in history, including lowering drug costs, eliminating waste, fraud, and abuse, and getting people off welfare and back to work."

The interview left many questions unanswered, including whether Trump would consider touching Social Security or what part of Medicare he would be willing to shave. The president veered from answering the question about entitlements to talking about the robustness of the U.S. economy and how his policies have helped alleviate poverty and boosted jobs for members of minority groups.

The president has already proposed cuts for some safety-net programs. His last budget proposal called for a total of $1.9 trillion in cost savings from mandatory safety-net programs such as Medicaid and Medicare. It also called for spending $26 billion less on Social Security programs, including a $10 billion cut to the Social Security Disability Insurance program, which provides benefits to disabled workers.

Spending on Social Security, Medicare and Medicaid is expected to cost the federal government more than $30 trillion through 2029, according to the budget office.

As a candidate for the White House, Trump stood apart from much of the GOP primary field as he vowed to oppose cuts to Social Security and Medicare, while also ensuring every American had health coverage.

In a tweet in May 2015, a month before he formally began his campaign, Trump discussed the promises of another Republican -- former Arkansas Gov. Mike Huckabee -- to keep entitlements intact.

"Huckabee is a nice guy but will never be able to bring in the funds so as not to cut Social Security, Medicare & Medicaid," Trump tweeted. "I will."

In Trump's formal campaign announcement that year, he said: "Save Medicare, Medicaid and Social Security without cuts. Have to do it. Get rid of the fraud. Get rid of the waste and abuse, but save it."

Although the White House countered that the proposal would not scale back benefits for seniors, Democratic congressional leaders and a major hospital group denounced the plan.

Democrats are also wrangling over entitlement programs, which are among the fastest-growing federal expenses. Sen. Bernie Sanders of Vermont and former Vice President Joe Biden, both Democratic presidential candidates, have been arguing for days over Biden's past comments about cuts to Social Security.

Biden had grown agitated over a video that the Sanders campaign had promoted in which Biden appeared to align himself with former Republican House Speaker Paul Ryan's calls for spending reductions in the program.

Biden supporters said the video was taken out of context -- saying the former vice president was actually mocking Ryan's proposals -- and Biden called on Sanders to publicly denounce the video. Sanders said over the weekend that he wished the full context were included, but he said Biden nonetheless had a long history of being open to Social Security cuts.

When Biden was asked during his 2008 presidential campaign, for example, whether he would consider changing the cost-of-living increases or the age of eligibility for Medicare and Social Security, he said, "Absolutely."

"You have to," he said on NBC's Meet the Press. "It's -- one of the things that my, you know, the political advisers say to me is, 'Whoa, don't touch that third [rail]' -- look, the American people aren't stupid. It's a real simple proposition. ... You've got to put all of it on the table."

Republicans have largely avoided talking about rolling back entitlement programs since Trump became president, assuming that doing so would be a nonstarter. After the $1.5 trillion tax cut that Republicans passed in 2017, some suggested that they would quickly turn to reducing the cost of Social Security, Medicare and Medicaid.

Those ideas gained little traction, and federal spending has continued to grow.

The Treasury Department said last week that the federal budget deficit surpassed $1 trillion in 2019. It was the first calendar year since 2012 that the deficit topped that threshold. To help finance deficits, which require the government to sell debt, the Treasury Department plans to begin issuing 20-year bonds.

"All I'm going to say is that we talked about there needs to be bipartisan review of government spending, and that's something at the appropriate time we'll look at," Mnuchin said.

The head of an advocacy group created to defend the Patient Protection and Affordable Care Act said Trump tipped his hand with his comments in Davos.

"The president has made it clear that he wants to make draconian cuts to both Medicare and Medicaid -- something that the American people vehemently oppose -- and today he said he's going to try again," said Leslie Dach, chairman of Protect Our Care.

Information for this article was contributed by Alan Rappeport and Maggie Haberman of The New York Times; by Ricardo Alonso-Zaldivar and Aamer Madhani of The Associated Press; and by Jeff Stein and Matt Viser of The Washington Post.