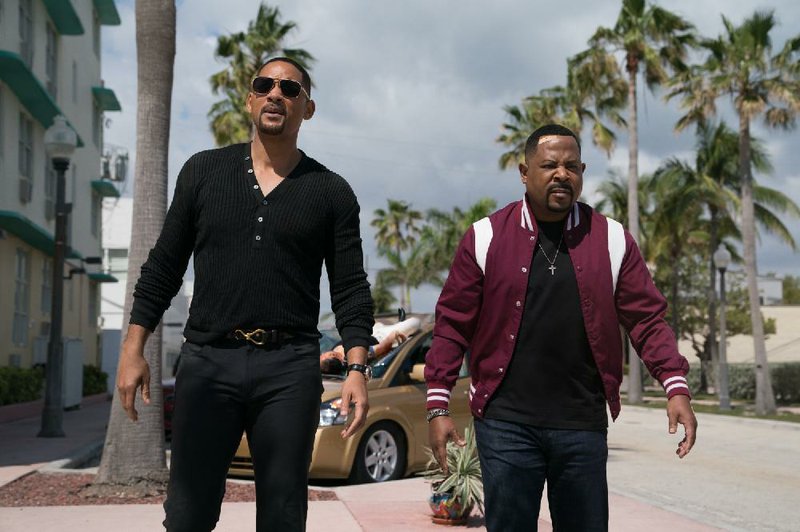 Will Smith (left) and Martin Lawrence reprise their roles in Columbia’s Bad Boys for Life, a follow-up to 1995’s Bad Boys and 2003’s Bad Boys II. It came in first at last weekend’s box office and made about $59.2 million.

OS ANGELES — Last weekend at the box office, old things were made new again as Columbia released its long-delayed Bad Boys sequel and Universal sought to introduce a younger audience to the classic Dr. Dolittle character.

In first place, Bad Boys for Life opened with an impressive $59.2 million, well above studio projections of $38 million, according to estimates from measurement firm Comscore.

A follow-up to 1995’s Bad Boys and 2003’s Bad Boys II, the film reunites Will Smith and Martin Lawrence as seasoned Miami cops forced to reckon with the violence they’ve wreaked as retirement looms on the horizon.

The $90 million action-comedy boasts the second-highest opening for Martin Luther King Jr. weekend after American Sniper, which opened on MLK weekend in 2014 to $107.2 million, and a franchise best. Comparatively, Bad Boys II opened to $46 million 17 years ago and wrapped its entire theatrical run with $65.8 million.

Bad Boys for Life was positively received, with an A CinemaScore and a 75% fresh rating on review aggregation site Rotten Tomatoes. Columbia is already developing a fourth installment, with screenwriter Chris Bremner set to return.

Starring Robert Downey Jr. as the titular veterinarian, the $175 million period film comes 19 years after Eddie Murphy inhabited the character and more than 50 years after Rex Harrison talked to the animals the first time. It was poorly received (as was the original), with a B CinemaScore and a 19% rotten rating on Rotten Tomatoes.

Dolittle was originally scheduled for release in May but was delayed twice after Universal sought to rework the script and complete reshoots. The disappointing result follows on the heels of the studio’s recent box office bomb, Cats.

On a brighter note for the studio, at No. 3, Universal and Amblin’s 1917 added $22.1 million in its fourth weekend for a cumulative $76.8 million. The film scored 10 Oscar nominations last week, including a best picture nod.

In fourth place, Columbia’s Jumanji: The Next Level added $9.6 million in its sixth weekend for a cumulative $270.5 million.

Rounding out the top five, Disney’s Star Wars: Episode IX — The Rise of Skywalker added $8.4 million in its fifth weekend for a cumulative $492 million.

At No. 6, Warner Bros.’ Just Mercy added $6 million in its fourth weekend for a cumulative $19.6 million.

At No. 8, Lionsgate’s Knives Out added $4.3 million in its eighth weekend for a cumulative $146 million.

Rounding out the top 10, Disney’s Frozen II added $3.7 million in its ninth weekend for a cumulative $465 million.

Fox’s Underwater dropped out of the top 10 in its second weekend, adding $3.6 million (a 49% drop) for a cumulative $12.8 million. Also falling out was Fox’s animated Spies in Disguise, collecting $2.6 million in its fourth weekend for a cumulative $58.4 million.

A quartet of best picture nominees added hundreds of locations to capitalize on the anticipated Oscar bump. Neon’s Parasite earned $1.7 million for a cumulative $27.7 million; Searchlight’s Jo Jo Rabbit added $1.4 million for a domestic total of $23.5 million; Fox’s Ford v. Ferrari notched $1.1 million for $112.9 million domestic; and Columbia’s Once Upon a Time … in Hollywood added a modest $310,000 upgrade to its $141.5 million North American total.

This weekend, Universal opens the horror movie The Turning and STX Entertainment premieres the action-adventure The Gentlemen.