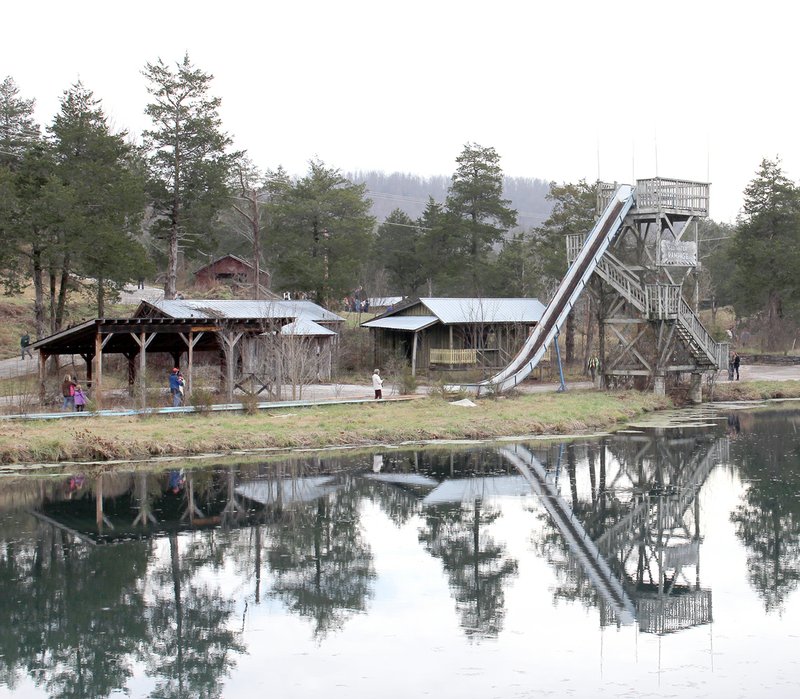 After Dogpatch's closing, salvageable rides were sold to various parks. Those that remained, like the Wild Water Rampage, cast a stark silhouette against the rugged landscape.

The abandoned Dogpatch theme park will be sold at auction outside the courthouse in Jasper on March 3 if the current owners don't come up with $1,031,885 before then, according to a filing Thursday in Newton County Circuit Court.

The "Notice of Commissioner's Sale" was filed two days after Circuit Judge Gordon Webb signed a decree of foreclosure Tuesday.

According to the decree, Great American Spillproof Products Inc. has 10 days from Tuesday's filing to pay $1,031,885 owed on the 400-acre property.

If that doesn't happen, the property must be advertised for sale at auction for 10 days in a newspaper published and circulated in Newton County, according to the decree.

Nance, his son John Pruett Nance of Rogers and their attorney Gregory Brent Baber of Little Rock hold the mortgage on the property.

They filed suit in September against Great American Spillproof Products after it fell behind on lease payments and missed a balloon payment for the total amount due in August.

Great American Spillproof Products bought the Dogpatch property for $2 million in 2014. Besides a $1 million promissory note, the company had paid $1 million.

Charles "Bud" Pelsor, president of Great American Spillproof Products, said in December that he was giving up on his dream of turning the abandoned theme park into an "ecotourism village." Pelsor, the inventor of a spill-proof dog bowl, said he was moving back to his home state of Indiana.

Pelsor and his business partners -- James and Susan Robertson of Newbury Park, Calif. -- had been trying to sell the Dogpatch property for years. The property is listed for sale at $1,250,000 -- down from $3 million when it was first posted for sale in 2016.

"If we hit the lottery we would do basically what Bud was going to do, but we don't have the capital to do it," Nance said. "We think his ecotourism ideas for the land were valid. Apparently, he underestimated his ability to pay for the property and develop his plan."

If an auction is held, Nance said he will start the bidding at $1 million.

Donnie Davis, the Newton County circuit clerk, will offer the property for sale at 9:30 a.m. March 3 at the east door of the Jasper courthouse, according to Thursday's court filing, which had a space for Davis' signature but wasn't signed. Davis couldn't be reached by telephone or email Thursday.

Constructed in 1967 for $1.33 million (about $10 million in today's dollars), Dogpatch originally featured a trout farm, buggy and horseback rides, an apiary, Ozark arts and crafts, gift shops and entertainment by characters from Al Capp's "Li'l Abner" comic strip, according to the Central Arkansas Library System's Encyclopedia of Arkansas. Amusement rides were added later.

The Nances acquired the property in 2011 in lieu of a $764,582 court judgment against the previous owners.

The Nances sued them after Pruett Nance was severely injured in 2005 when he rode an all-terrain vehicle on a road through the abandoned park and hit a cable strung between two trees. Pruett Nance's trachea was severed and his neck was broken as a result.