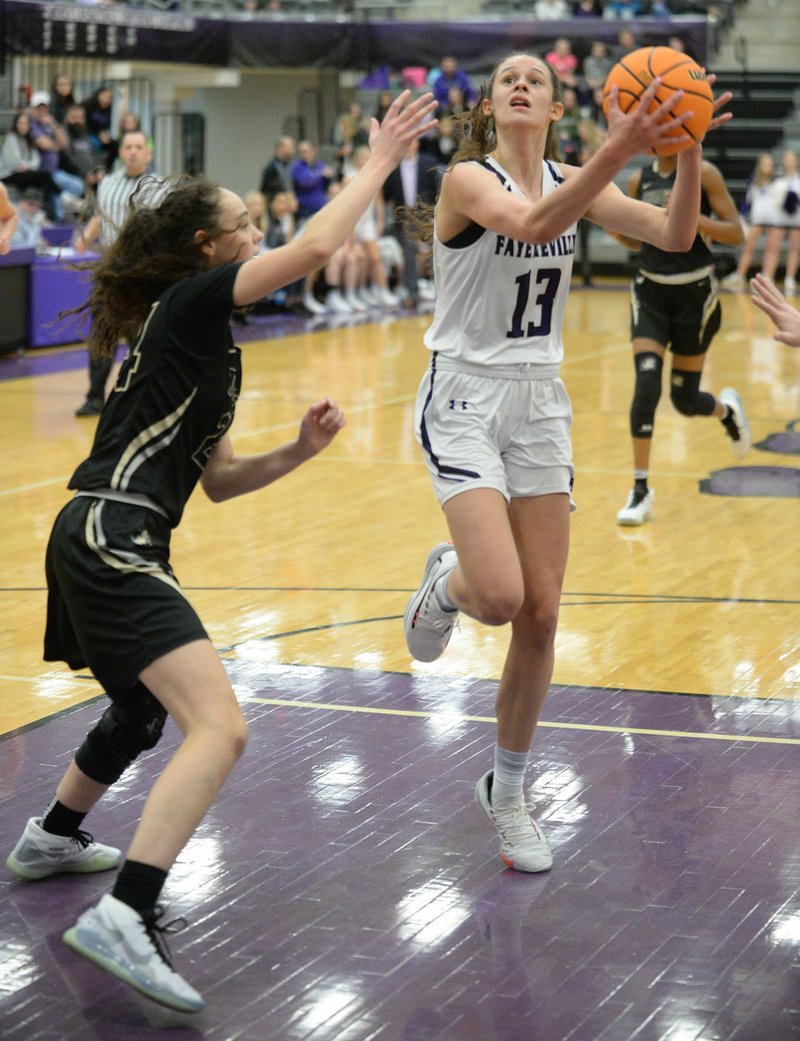 Fayetteville's Sasha Goforth (13) drives into the lane Friday, Jan. 17, 2020, as she is pressured by Emily Sanders Bentonville's Riley Hayes during the first half of play in Bulldog Arena in Fayetteville. Visit nwaonline.com/prepbball/ for a gallery from the games. (NWA Democrat-Gazette/Andy Shupe)

FAYETTEVILLE -- Fayetteville senior Sasha Goforth was recognized Thursday as one of the top high school basketball players in the country with her selection to the McDonald's All-American team.

Goforth will take the court on April 1 at the Toyota Center in Houston in a game that will be televised nationally by ESPN and ESPN2. The senior guard was among the 48 players announced for the boys and girls teams.

The McDonald's All-American Games are an annual showcase for the nation's top prep players. Goforth, who signed with Oregon State, is the only player from Arkansas on the rosters that were revealed Thursday.

"Sasha is very deserving," Fayetteville coach Vic Rimmer said. "I am extremely excited for her. Sasha has been blessed with talent and length, but she puts so much time watching film and working on the court to become the player she is. She wants to be the best offensive player, the best defensive player and best teammate she can be."

Goforth has been a four-year starter for the Lady Bulldogs. The 6-foot guard has helped lead her team to a 12-4 overall record and 3-1 in 6A-West Conference play heading into tonight's games with Springdale High. Goforth is rated a 4-star player who was selected as the Arkansas Gatorade Player of the Year for 2019.

Goforth learned she had been selected to the McDonald's All-American Games on social media Thursday, and Rimmer announced it to the rest of the Fayetteville team before practice.

"Her teammates were cheering and hugging her," Rimmer said. "But Sasha is such a humble kid. She kind of put her head down, and you couldn't really see the excitement in her."

Goforth led Fayetteville to a state championship as a freshman in 2017. She was chosen Most Valuable Player of the Class 7A State Tournament after she scored 19 points when Fayetteville beat North Little Rock in the state championship game at Hot Springs. Goforth continued to pile up statistics and awards as a sophomore and junior before signing a college letter of intent in November along with teammate Coriah Beck, who chose Memphis. Goforth chose Oregon State from over 30 scholarship offers from Division I schools.