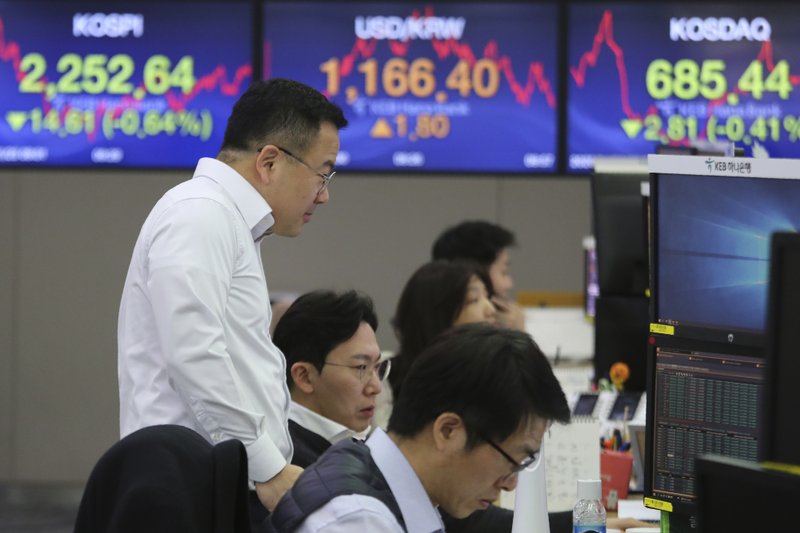 Currency traders watch monitors at the foreign exchange dealing room of the KEB Hana Bank headquarters in Seoul, South Korea, Thursday, Jan. 23, 2020. Asian shares are mostly higher as health authorities around the world move to monitor and contain a deadly virus outbreak in China and keep it from spreading globally. (AP Photo/Ahn Young-joon)

The S&P 500 notched a small gain for the second straight day, while a modest pickup nudged the Nasdaq composite to an all-time high. The Dow Jones Industrial Average closed lower for the third day in a row, weighed down by a steep drop in shares of Travelers Cos.

Excluding the Nasdaq, the major U.S. stock indexes are on track to end the week with a loss.

Trading was choppy for much of the day after a sell-off in Asia, where concern about the potential fallout of a deadly new virus outbreak dragged stock indexes in China sharply lower. Fears that the coronavirus could spread, dampening tourism and economic growth, has weighed on global markets this week, driving up demand for U.S. government bonds and safe-play stocks.

Traders also had their eye on a mixed batch of company earnings reports, including encouraging quarterly results from American Airlines and Citrix Systems, and disappointing report cards from Travelers and Raymond James Financial.

"Today was driven a bit by earnings, but also by the coronavirus fears," said J.J. Kinahan, chief strategist with TD Ameritrade. "Asian markets had a really tough night and that was our lead-in, that put a bit of extra pressure on the market coming in."

Stocks got off to a shaky start after a sell-off in global markets as authorities worldwide stepped up measures to monitor and contain the virus. The central Chinese city of Wuhan, where the virus is concentrated, closed down its train station and airport Thursday to prevent people from entering or leaving the city.

The coronavirus has been confirmed in five countries, including China, the U.S., Thailand, Japan and South Korea. More than 500 people have fallen sick and 17 have died from the illness, which can cause pneumonia and other severe respiratory symptoms.

A World Health Organization committee decided on Thursday against declaring the outbreak a global emergency for now. Such a declaration can bring more money and other resources to fight a threat but can also trigger economically damaging restrictions on trade and travel in the affected countries, making the decision a politically fraught one.

The market regained some of its footing as the day went on and investors focused on the latest company earnings reports.

Industrial stocks also rose, helped by solid earnings from American Airlines Group. Strong travel demand resulted in record occupancy levels on its planes, though the airline noted it had to cancel about 10,000 flights during the fourth quarter because of the grounding of the Boeing 737 Max jets. Its stock climbed 5.4% and helped lift other airlines. Southwest Airlines gained 3.6% and Alaska Air Group rose 2.4%.