Policy gains praise of some; environmentalists fear harm by Compiled by Democrat-Gazette staff from wire reports | January 24, 2020 at 7:10 a.m. 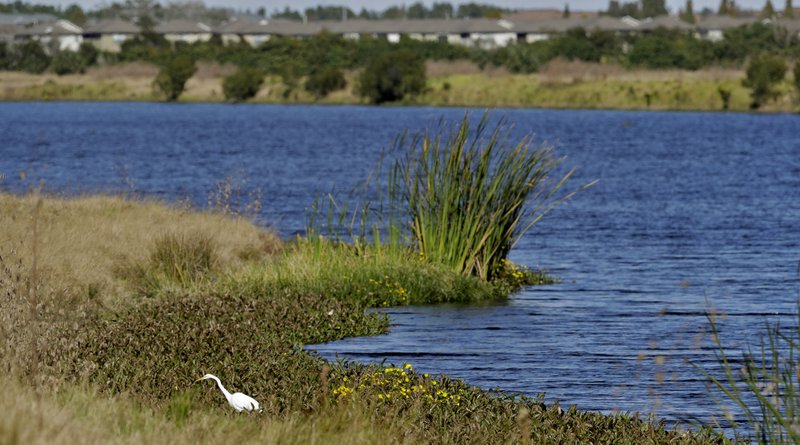 An egret hunts for food along Valhalla Pond in Riverview, Fla., in December 2018. The federal government finalized a policy change Thursday that narrows environmental protection for streams, wetlands and other bodies of water. (AP/Chris O’Meara)

WASHINGTON -- The federal government on Thursday finalized a rule to strip away environmental protections for streams, wetlands and other water bodies, handing a victory to farmers, fossil fuel producers and real estate developers who said the rules had shackled them with onerous and unnecessary burdens.

The policy change, signed by the heads of the Environmental Protection Agency and U.S. Army Corps of Engineers, narrows the types of waterways that qualify for federal protection under the half-century-old Clean Water Act.

Since his first weeks in office, President Donald Trump has targeted environmental and public health regulations that he says imposed unnecessary burdens on business. Speaking to farmers Sunday at the American Farm Bureau Federation's annual convention in Austin, Texas, Trump repeated his frequent claim that an attempt in 2015 to more clearly define what water bodies qualify for federal pollution protection was "one of the most ridiculous regulations of all."

Real estate developers, farmers, ranchers and others fought for years against the regulations that were implemented during President Barack Obama's administration. Homebuilders complained that the rules needlessly limited where they could build. Farmers complained that the rules amounted to illegal infringements on their property rights that required them to get costly permits in order to dig a ditch. Mining and oil and gas companies joined the attack.

But environmental groups and public-health advocates say the rollback will allow businesses to dump pollutants into unprotected waterways and fill in some wetlands, threatening public water supplies downstream and harming wildlife and habitat.

Environmental groups in Arkansas contended the rule did not add clarity and put more waters, including groundwater, streams and wetlands, at risk of pollution.

"All the new rule accomplishes is added confusion that will make it easier for polluters to degrade our shared resources in states like Arkansas, where elected officials and the environmental regulators they appoint, put profits before people," Jessie Green, waterkeeper and executive director of the White River Waterkeeper, wrote in a statement to the Arkansas Democrat-Gazette.

"This administration can ignore science, the law and public opinion, but it won't change the facts," Glen Hooks, director of the Sierra Club's Arkansas chapter, wrote to the newspaper. "The consequences of rollbacks to basic environmental safeguards will be felt for years to come."

The final rule will be published in the Federal Register in the next few days and become effective 60 days after that.

EPA head Andrew Wheeler told reporters Thursday that states were still free to step in with state protections of newly vulnerable waterways if they chose.

"Our rule protects the environment and our waterways while respecting the rights of states and property owners," Wheeler said. The rollback of the clean-water enforcement "strikes the proper balance between Washington, D.C., and the states," he said.

The administration had completed the first step of the Obama rule's demise in September with its repeal.

The replacement will complete the process, not only rolling back 2015 rules that guaranteed protections under the 1972 Clean Water Act to certain wetlands and streams that run intermittently or run temporarily underground, but also relieves landowners of the need to seek permits that the EPA had considered on a case-by-case basis before the Obama rule.

"This is a big win for farmers, and this is the president delivering what he promised," said Donald Parrish, senior director of regulatory affairs for the American Farm Bureau Federation, which had lobbied for years to weaken the Obama administration's water rules.

Karen Harbert, chief executive officer of the American Gas Association, said the new rule "would restore the proper balance between federal and state regulation of our nation's waters and protect our rivers, streams and lakes without stifling construction of important infrastructure."

Brett Hartl, a government affairs director with the Center for Biological Diversity conservation advocacy group, called the changes "a sickening gift to polluters."

The administration's action "will allow wetlands, streams and rivers across a vast stretch of America to be obliterated with pollution," Hartl said, contending the rollback would speed extinction for dozens of endangered species. "People and wildlife need clean water to thrive. Destroying half of our nation's streams and wetlands will be one of Trump's ugliest legacies."

The administration says the changes would allow farmers to plow their fields without fear of unintentionally straying over the banks of a federally protected dry creek, bog or ditch. But the government's own figures show it is real estate developers and those in other nonfarm business sectors that take out the most permits for impinging on wetlands and waterways, and stand to reap the biggest regulatory and financial relief.

Golf course developers were among the key opponents of the Obama rule and key backers of the new one. Trump's real estate holdings include more than a dozen golf courses.

Environmental groups said the draft version of the rule released earlier would have lifted federal protections for roughly half of the nation's wetlands and one-fifth of the millions of miles of waterways. The administration challenges that estimate and says it is not possible to come up with a solid figure for how much of the nation's surface water will be affected.

The Obama rule protected large bodies of water such as the Chesapeake Bay, the Mississippi River and Puget Sound, and smaller headwaters, wetlands, seasonal streams and streams that run temporarily underground. It limited the discharge of pollutants such as fertilizers, pesticides and industrial chemicals into those waters.

The new rule will retain federal protections of large bodies of water, as well as larger rivers and streams that flow into them and wetlands that lie adjacent to them. But it removes protections for many other waters, including wetlands that are not adjacent to large bodies of water, some seasonal streams that flow for only a portion of the year, "ephemeral" streams that only flow after rainstorms, and water that temporarily flows through underground passages.

Federal data suggests 81% of streams in the Southwest would lose long-held protections, including tributaries to major waterways that millions of people rely on for drinking water.

" That's a huge rollback from way before Obama, before Reagan," said Blan Holman, a senior attorney with the Southern Environmental Law Center. Holman also said that the new rule exemplifies how the Trump administration has dismissed or marginalized scientific evidence. Last month, a government advisory board of scientists, many of whom were hand-picked by the Trump administration, wrote that "These changes are proposed without a fully supportable scientific basis, while potentially introducing substantial new risks to human and environmental health."

Another key change removes federal protections for wetlands deemed not directly connected to a major waterway. Geoff Gisler, senior attorney at the Southern Environmental Law Center, said it appears that millions of acres of the wetlands on the Southeastern coast alone -- vital buffers against flooding and climate change -- would lose protections, as would so-called prairie pothole wetlands in the middle of the country, and others.

Environmental groups and some states are promising legal challenges. But Gisler fears developers and others will take Thursday's announcement as a signal, and move quickly -- '"get the bulldozers lined up, and day 61 fill in streams and wetlands," he said.

In South Dakota, farmer Arlen Foster said Thursday that many farmers believe that wetlands restrictions went too far even before the EPA adopted the 2015 rule. And the EPA isn't the only agency that can affect farmers' use of their land, he said. The U.S. Supreme Court in 2017 rejected his petition challenging an Agriculture Department system that determined a small tract of his land was a wetland. He had argued that repeated snowmelt led to standing water.

"These issues illustrate that ... regulations got out of hand and have gone too far," he said.

Information for this article was contributed by Ellen Knickmeyer, Susan Montoya and Tammy Webber of The Associated Press; by Coral Davenport of The New York Times; by Anna M. Phillips of the Los Angeles Times; and by Emily Walkenhorst of the Arkansas Democrat-Gazette.