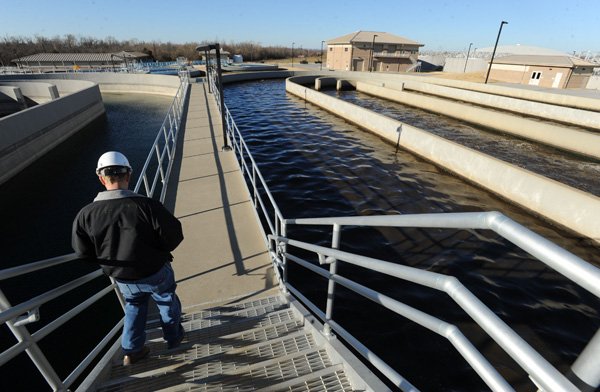 Timothy Tinsley, an operator for CH2M Hill, which operates Fayetteville’s West Side Wastewater Treatment Plant, walks Dec. 13 through the plant.

A long-debated draft regulation governing how water-quality "credits" can be traded among groups will be developed by the Arkansas Division of Environmental Quality, regulators determined Friday.

The Arkansas Pollution Control and Ecology Commission approved the division's proposal after the group that had been developing the regulation reached a stalemate in their negotiations.

The Northwest Arkansas Nutrient Trading Research and Advisory Group originally petitioned the commission to develop the rule, which was required by Arkansas Act 335 of 2015. The group comprises the cities of Fayetteville, Springdale, Rogers and Bentonville.

The cities of Fayetteville and Springdale voiced support for the division's move at Friday's commission meeting.

The Division of Environmental Quality will return to the commission next month with a plan for creating and submitting a proposed rule, said Becky Keogh, secretary of the Arkansas Department of Energy and Environment.

Keogh said she wants to provide more clarity to what has been proposed so far. The lack of specificity in the original proposal had been a chief concern among critics.

"It will be a key tool as we operate our permitting program, and we want to make sure our permits will hold up and not be challenged on the basis of a rule," Keogh said.

Nutrient trading allows for the exchange of nutrient limits between dischargers in the same watershed, which is the area around a body of water that drains into it.

Too many nutrients, such as nitrogen and phosphorus, can cause algae to grow in bodies of water and harm fish.

The four Northwest Arkansas cities that worked on the original proposed rule have spent millions of dollars trying to lower nutrient levels in their wastewater discharge, while the area's Illinois River remains polluted with excess phosphorus.

Arkansas does not have numeric standards for nutrients. Oklahoma does, and it has contended that operations in Arkansas have led to the excess phosphorus measured in the Illinois River in Oklahoma.

Act 335 required a Nutrient Water Quality Trading Advisory Panel to review any proposed rule before the commission can consider it. That group approved the Northwest Arkansas Nutrient Trading Research and Advisory Group's proposal in 2017, and the group petitioned the commission to adopt the rule in January 2018.

Many commentors, including the Arkansas Division of Environmental Quality, raised objections to the proposal. So in September 2018, the group of Northwest Arkansas cities sought and received permission from the commission to revise their proposed rule.

The cities never came to an agreement on a proposed rule, and the city of Fayetteville was the lone dissenting vote late last year on a new proposal.

Fayetteville leaders wanted water-quality monitoring at places other than wastewater treatment plants or other direct wastewater sources. City leaders also wanted a long-term commitment to reduce the level of phosphorus and nitrogen in local watersheds from any source.

That prompted the city of Springdale to ask the commission to become the sole petitioner for the rule-making process. In its filing, the city said it believed the deadlock was unlikely to change.

Fayetteville and water utility groups opposed Springdale's request. Fayetteville contended that proceeding without the other Northwest Arkansas cities violated the cities' contract with one another.

"We are happy to go forward in this matter in partnership with ADEQ," Gaston said.

An attorney representing the city of Fayetteville called the action "encouraging" and said the city looked forward to working with the division.