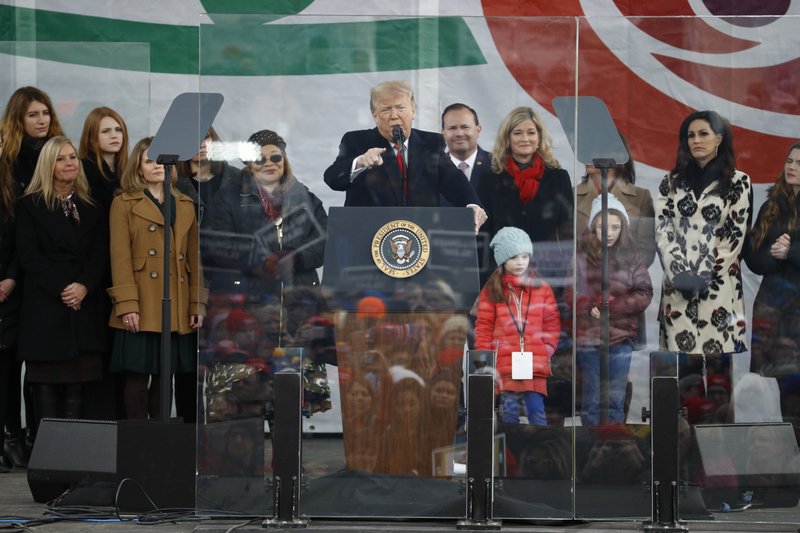 WASHINGTON -- Activists at the 47th annual March for Life gave President Donald Trump a high-decibel welcome Friday, applauding his efforts to curtail abortion rights in the United States and around the world.

Arkansans in the crowd praised Trump for championing their cause. His faithfulness won't be forgotten in November, they predicted.

Every Republican U.S. president for nearly 40 years has portrayed himself as anti-abortion. But none of them -- until Trump -- had ever attended the annual march.

"He's the first president that's been boldly -- this is maybe the right word -- pro-life," said Debbie Meagher, a marcher from Hot Springs Village.

Trump has fought to prevent Planned Parenthood from receiving federal funding. He has called on Congress to ban late-term abortions. He has also reinstated the Mexico City Policy -- critics call it the Global Gag Rule -- which prevents foreign health organizations from receiving U.S. funding if they help facilitate abortions.

He denounced abortion while addressing the United Nations General Assembly and he has worked to block U.N. funding for organizations that promote abortion rights.

Most important, supporters say, he has appointed conservative judges who are unlikely to expand abortion rights.

"With that sort of leadership, it feels like the tide is maybe, finally, turning a little bit toward the pro-life movement," Meagher said. "If there's a little more momentum, we just might make some real progress."

In his speech, Trump portrayed himself as mainstream, arguing that Democratic politicians are radically out of touch.

At the time of the 7-2 ruling, there were prominent Democrats opposing legalized abortion and high-profile Republicans favoring it.

Today, anti-abortion-rights Democrats on Capitol Hill have all but vanished; pro-choice Republicans are also a rarity.

"America is in a bit of a cultural war. ... There are two sides, and you're either one or the other," said Kevin Farrell, a marcher from Hot Springs Village.

"As much as Trump may be an imperfect vessel, he is the only leader on our side of the values, and therefore I will vote for him unapologetically."

Given the parties' stances, Trump is the only candidate that abortion opponents can support, said Aprill Rogers, a marcher from White Hall.

"There's no way you can be pro-life at all and vote Democrat. I think in November, the pro-life community's going to show up in droves for Trump," she added.

"Being the first President EVER to personally address the March is (as Trump might say) YUUUUGE! But it's much more than him speaking. Fact is, NO President has ever done more for the issue of the sanctity of life as has President Trump. Not Reagan, not the Bushes, NO ONE," Huckabee wrote.

Back in Arkansas, anti-abortion leaders agree with that assessment.

"He shares our values of the sanctity of human life and has done more than any other president ever before to protect and defend the lives of the unborn child," said Rose Mimms, executive director of Arkansas Right to Life.

Trump has kept his promises over the past three years, according to Arkansas Right to Life PAC Director Wayne Mays.

"We're not so much worried about his words or his tweets as we are about his actions," Mays said. "He's pro-life, pro-religion, pro-America and pro-Israel -- all of the things which conservatives have held dear."