IN THE GARDEN: Don't give in to temptation to fertilize early greening grass 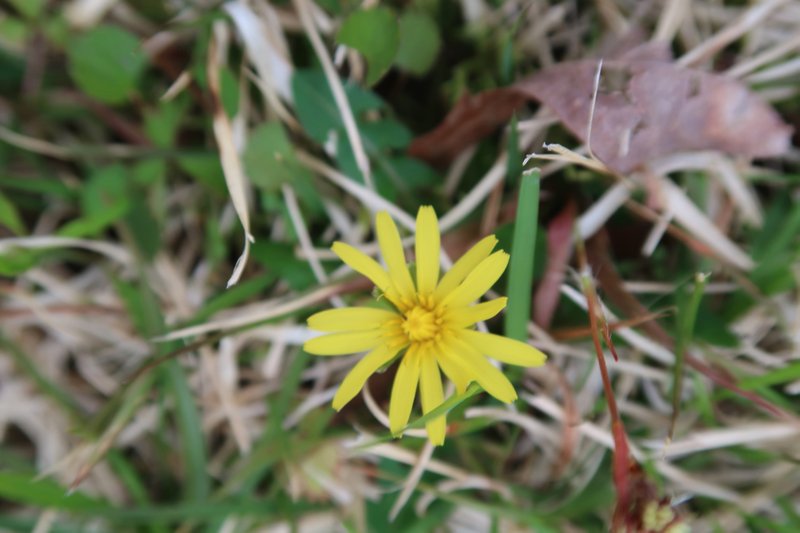 Even if the lawn breaks dormancy early this winter, it's a bad idea to use a weed-and-fertilizer to kill winter weeds in January. (Special to the Democrat-Gazette/Janet B. Carson)

Q I think my Bermuda grass is already starting to turn green. Does this mean I should start fertilizing as well? I also have some weeds and so was thinking of using a weed killer but will that damage the grass as it is greening up?

A It is hard to wrap my head around the idea that Bermuda grass would be breaking dormancy in January, but strange things are being reported this year. There are lots of plants growing and even blooming that shouldn't be yet, but the recent low temperatures may have literally nipped them in the bud. I seriously hope you are just seeing weeds greening up, but even if by some chance the lawn is beginning to grow, you definitely do not want to encourage it by fertilizing now. We have a long way to go before we are officially frost-free. Tender new growth is much more sensitive to cold damage than dormant plants. Wait for mid- to late April or early May before starting fertilization. You can use winter weed killers now but avoid weed-and-feed combinations. Just like everything else, winter weeds are growing by leaps and bounds. The key is to get to them before they bloom and set more seeds. 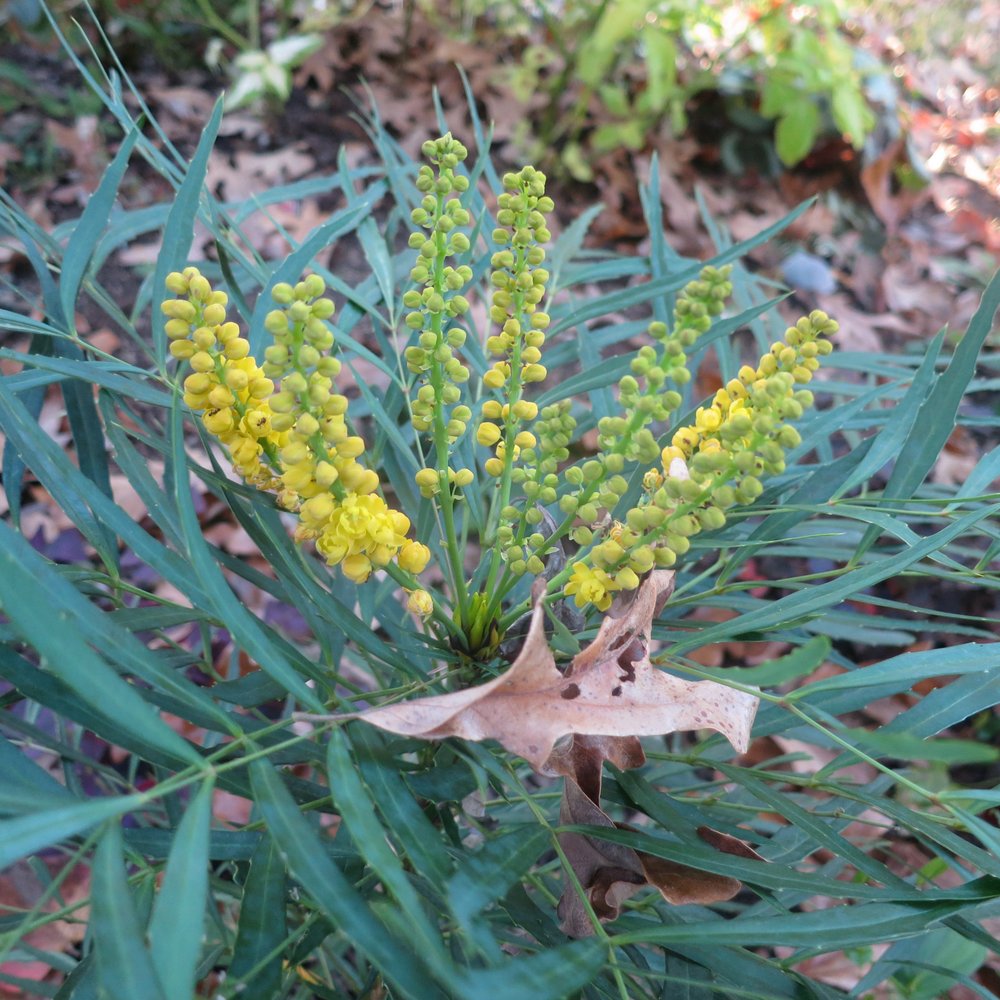 'Soft Caress' mahonia is a relatively short variety of the shade-loving shrub. (Special to the Democrat-Gazette/Janet B. Carson) 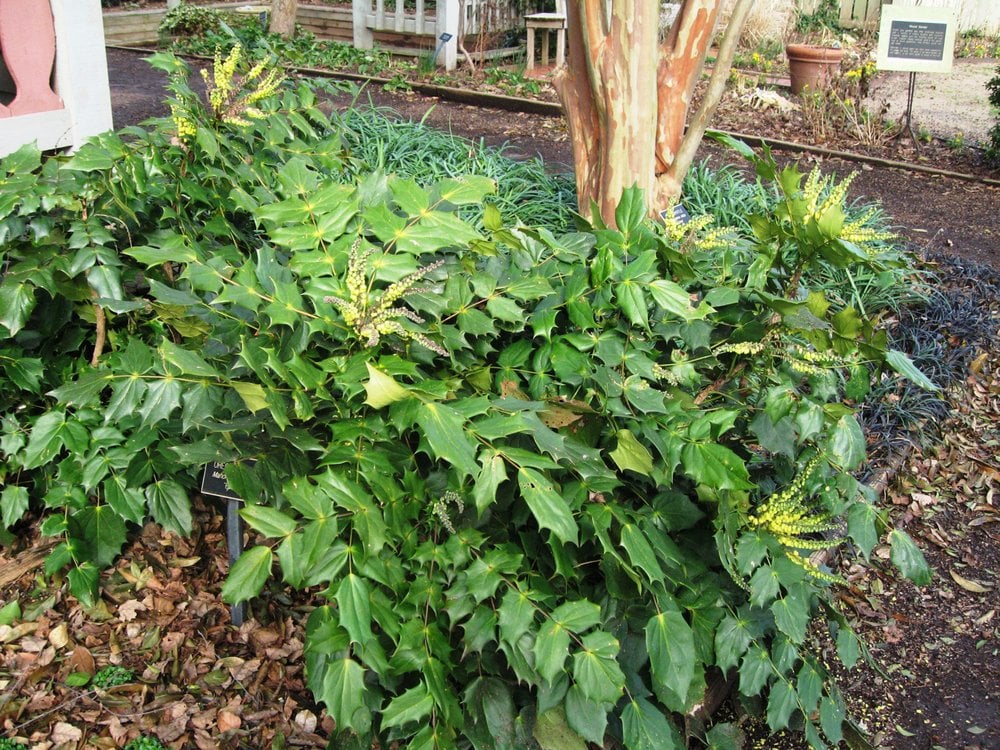 Mahonia flowers in late fall or early winter depending on the variety. (Special to the Democrat-Gazette/Janet B. Carson)

Q Can you recommend some shade evergreens that only get 3 to 4 feet tall? Our trees have grown denser and we love the shade, but the azaleas that were there don't bloom anymore and got much too tall. I don't care if they flower or not, but that would be nice for a few. They would get maybe 2 or 3 hours of filtered sun. 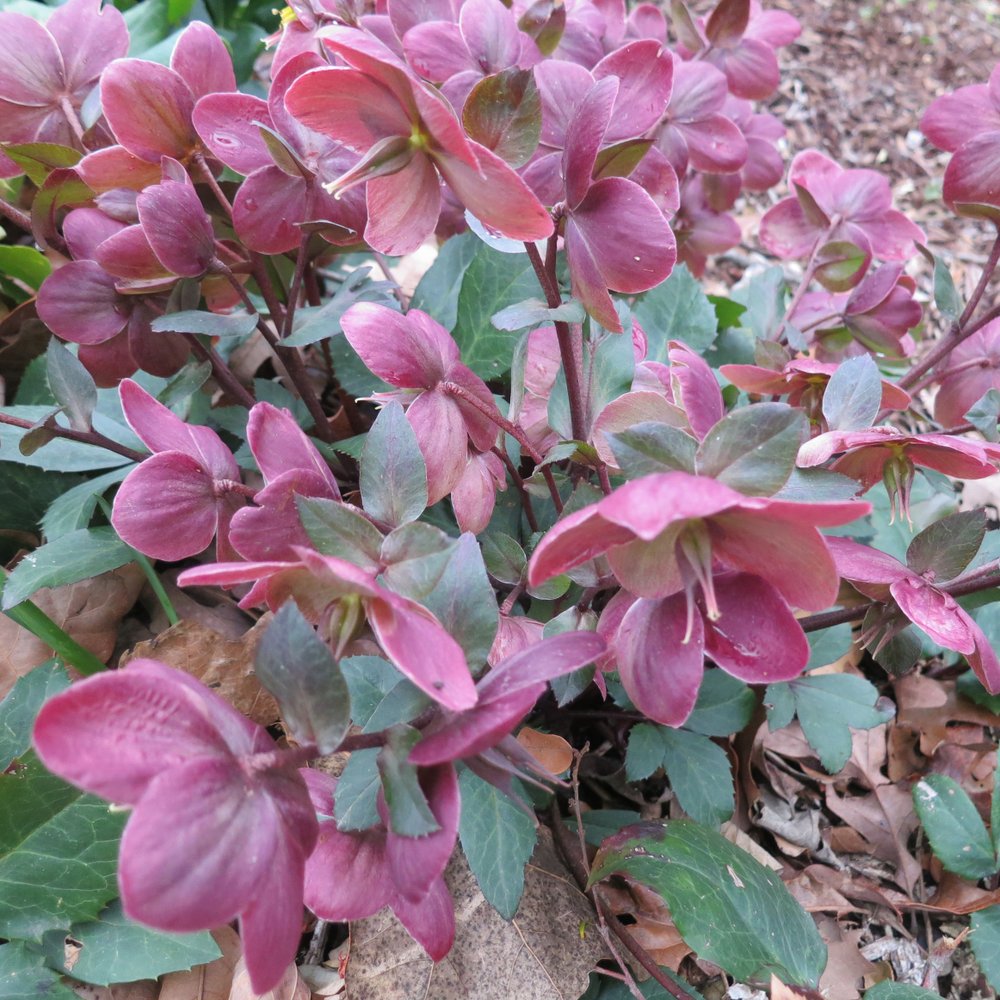 Hellebores are elegant additions to the shady garden. (Special to the Democrat-Gazette/Janet B. Carson)

A There are several choices. For green fill, you can use a dwarf holly, like dwarf yaupon. It does not bloom or set berries but will thrive in full sun to deep shade. Dwarf boxwoods will also give you the green fill with no flowers or fruit, as will 'Prostrata' plum yew (Cephalotaxus). It has a unique texture. There are several varieties of mahonia that will bloom in late fall or early winter depending on which one you choose.

'Soft Caress' is a shorter one with fall blooms, but it is not reliably hardy in the northern tier of the state. In Central and southern Arkansas, you can use aucuba and fatsia, both shade lovers. Aucuba varieties can have green foliage or yellow-spotted and come in standard and dwarf varieties. You might also consider sweetbox (Sarcococca confusa), a slow-growing, small evergreen with fragrant white flowers in the winter. For a shorter plant to use in front, consider some of the winter-blooming hellebores. Considered an herbaceous perennial, they are evergreen. 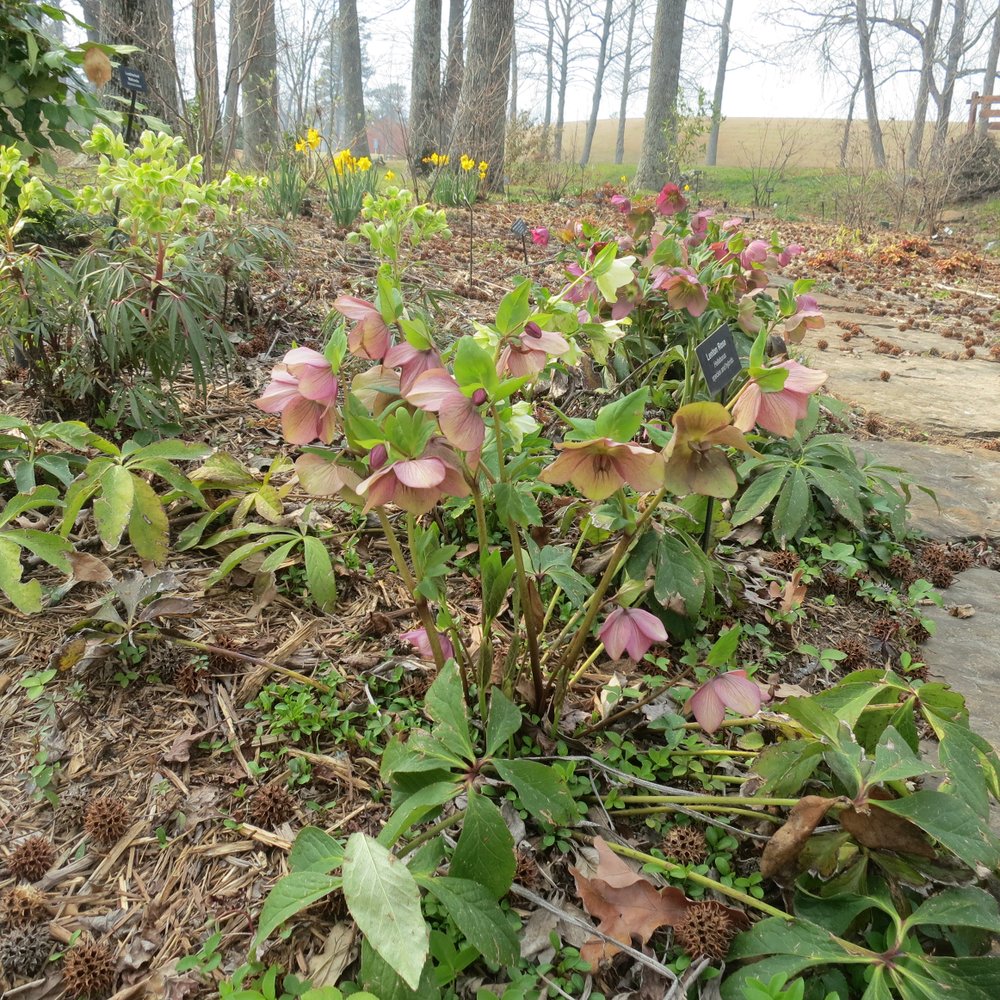 Winter-blooming Hellebores come in several heights. (Special to the Democrat-Gazette/Janet B. Carson) 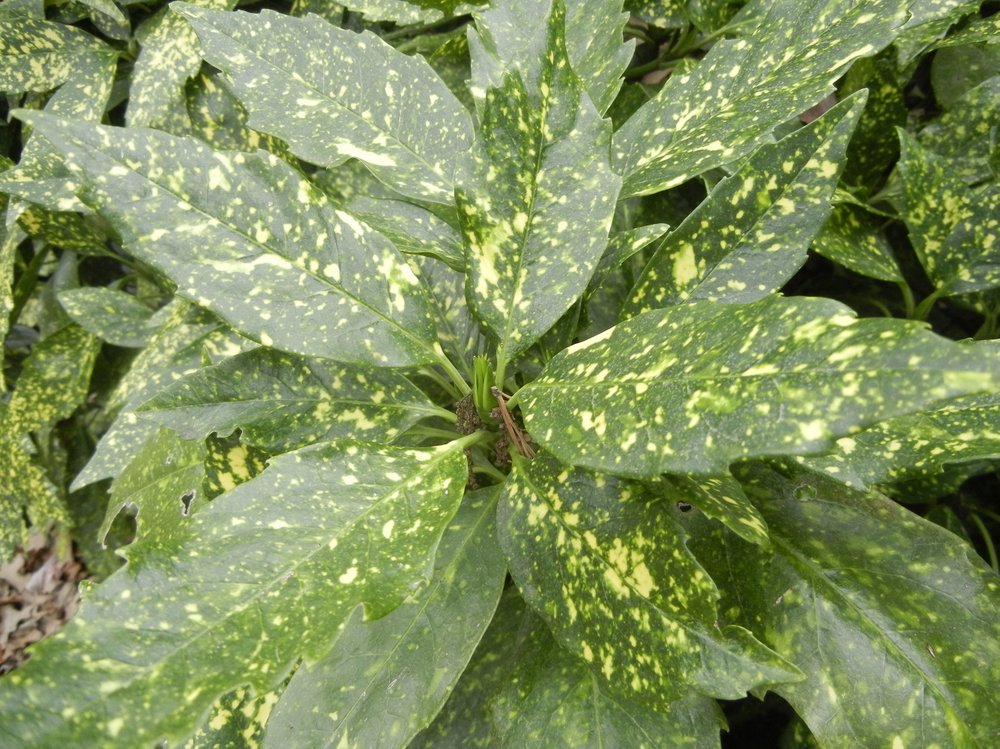 Shade-loving Aucuba does well in Central and southern Arkansas. (Special to the Democrat-Gazette/Janet B. Carson) 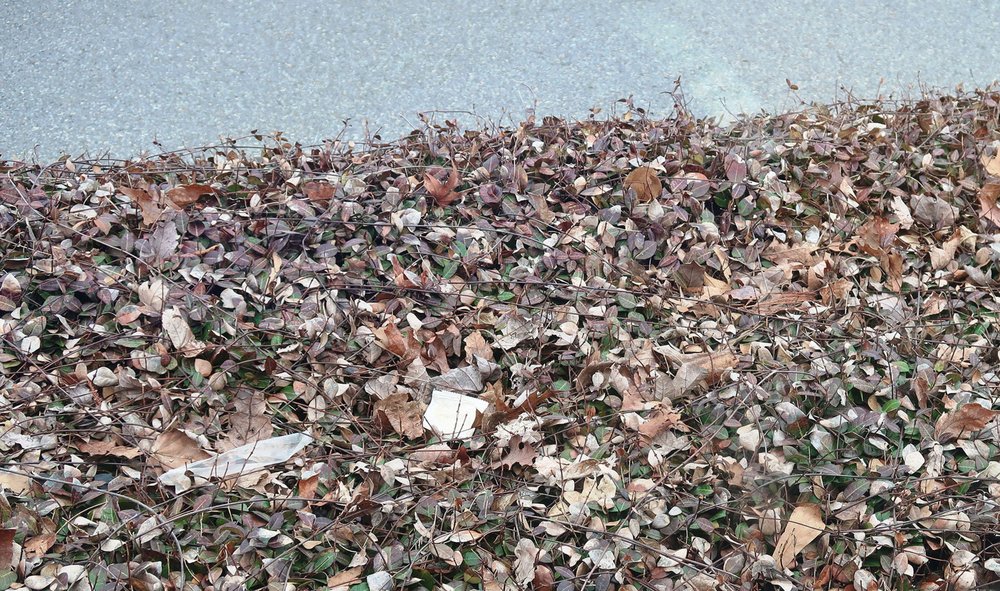 This Asiatic jasmine was clobbered by November's abrupt freeze but is beginning to recover. (Special to the Democrat-Gazette/Janet B. Carson)

Q My front yard is an extremely steep slope that we could not possibly mow, so several years ago we planted Asian jasmine as a groundcover. It has been a dream, getting thicker each year but easily maintained. It doesn't bloom, but since it was planted, it was always a lovely deep green, year-round. This year it turned almost all brown in November, and I thought perhaps it had died. I knew not to tackle replacing it in the winter because it would erode away. Now, I am seeing signs of green inside it, and I am overjoyed. Should I cut back all the dead leaves now to make way for the new foliage? What about fertilizing it too?

A The hard freeze that came early in November did do some damage to a variety of plants, and Asiatic jasmine (Trachelospermum asiaticum) was one of them. Asiatic jasmine is an excellent groundcover for sun and shade. It can bronze up a bit in cold weather, but the early freeze caught it before it went dormant. We have seen more damage in full sun than in shadier yards. It is beginning to come back, and time will tell if there is any permanent damage. It is hardy in most of the state, but its status in the northern tier of counties is questionable. Although everyone has wanted to prune back damage now during the mild weather, I recommend waiting. Get through February if you can before you prune. Since the groundcover Asiatic jasmine rarely has any flowers, you aren't interfering with blooms. If you prune it back now and expose the green, new growth and it gets cold again, you could be back at square one, with more damage. If you have a large area to prune, you can use a lawnmower at the highest setting or a weed-eater to prune it back when you do prune. Pruning shears also work but would be labor-intensive over a large area.