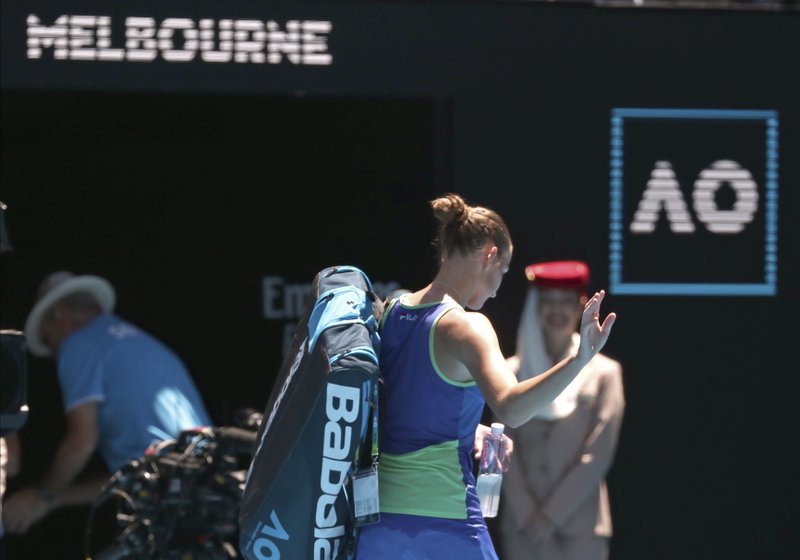 Karolina Pliskova of the Czech Republic waves as she leaves Rod Laver Arena after her third round loss to to Russia's Anastasia Pavlyuchenkova at the Australian Open tennis championship in Melbourne, Australia, Saturday, Jan. 25, 2020. (AP Photo/Dita Alangkara)

MELBOURNE, Australia -- Second-seeded Karolina Pliskova and No. 6 Belinda Bencic went the same way as Serena Williams and defending champion Naomi Osaka did the day before -- exiting the Australian Open in a chaotic third round.

Pliskova, a semifinalist here last year, lost 7-6 (4), 7-6 (3) to 30th-seeded Anastasia Pavlyuchenkova today in a match lasting almost 21/2 hours. It was an ominous start, with Pliskova needing almost 18 minutes and fending off six break-point chances before holding in her first service game.

The 2016 Australian Open winner will play Pavlyuchenkova for a spot in the quarterfinals.

"It was a tough battle," the 17th-seeded Kerber said. "It's great to be in the second week in Melbourne again. It's still a long way."

Halep was the tournament runner-up in 2018 to Wozniacki and went on to win the French Open a few months later for her first major.

The 67th-ranked Gauff took the latest step in her quick progression, becoming the youngest player in the professional era to eliminate the defending women's champion at the Australian Open, beating Osaka 6-3, 6-4.

Only once the last point had been played did the preternaturally poised Gauff turn into a rather typical teen, joking about wanting to take "a selfie for Instagram" with Rod Laver, the 11-time major champion after whom the tournament's main stadium is named.

"Honestly, like, what is my life? Like, oh, my gosh," Gauff told the crowd. "Two years ago, I lost first round in juniors and now I'm here. This is crazy."

It certainly is remarkable.

With a booming serve, a top-flight backhand and a winner's mentality, Gauff reversed the result from the first time she was across the net from Osaka, a former No. 1 who already owns two major titles at the age of 22.

When they played each other at the U.S. Open last September, Osaka won in two quick sets and then consoled Gauff, encouraging her to speak to the spectators who were pulling for her.

One reminder of just how young Gauff is: Most of the entrants in this year's junior Australian Open are older than she is.

Another: She is taking online classes and said she's been given permission to turn in homework late, "considering the circumstances."

She also doesn't have an official driver's license quite yet, stuck practicing behind the wheel with a learner's permit.

But put a tennis racket in her hands and move out of the way: Gauff is now 8-2 in her nascent Grand Slam career, with three of those victories coming against women who have multiple major titles.