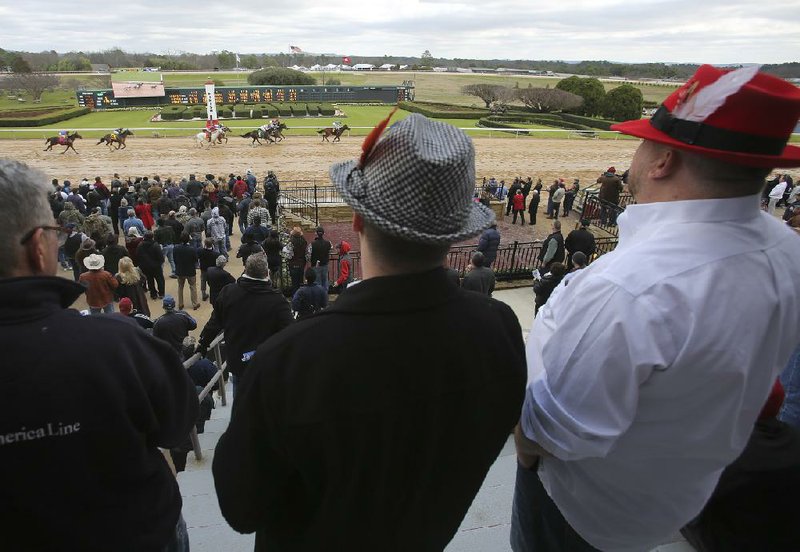 HOT SPRINGS -- Opening days at racetracks are somewhat routine for horsemen, but most are as excited as racing fans to finally see their handiwork on display.

That seems particularly true at Oaklawn.

Oaklawn Racing Casino Resort began its 2020 season with a nine-race card for an estimated crowd of 20,000, which was highlighted by Gold Street's victory in the Smarty Jones Stakes on Friday. It was the first of a three-day opening stretch packed with high-dollar races, including two stakes races today.

Jeremiah Englehart, in his 18th year as a trainer but at his first full Oaklawn season, said he wished he could take his opening-day experience to every track he visits.

"I'm here because I see what they're doing for racing, and I want to be a part of it," Englehart said. "It's southern hospitality at its finest, and it's a pleasure to be around it."

The $100,000, 1-mile Fifth Season Stakes for 4-year-olds and up was split into two divisions to make way for 16 entrants. Half are entered in the fifth of nine races on today's card, and the rest in the eighth.

"I was glad to see the split," said Danny Caldwell, owner of Chris and Dave, an entrant in the first division. "It gives more people a chance to race. I appreciate Oaklawn doing that for us. Both sides of the race are tough. There's not an easy side to it."

Cipriano Contreras trains his and David Rodriguez's Guest Suite in the first division and Rated R Superstar in the second division of the race. Contreras was an assistant trainer at Arlington International and Hawthorne racetracks in the Chicago metropolitan area for over 30 years and knows the ropes of a new season.

Horsemen with Fifth Season entrants were into their daily grind during early morning training hours Friday and, between comments about the 34-degree windchill, sounded eager for the first afternoon of racing and their horses' chances in today's co-feature.

Rated R Superstar, a son of Kodiak Kowboy, has not raced since June 15, but Contreras hopes a significant class drop will counter seven months away from racing for his 7-year-old gelding. Two of Rated R Superstar's last three races have been graded stakes.

"He's an old veteran," Contreras said. "You always know he's going to give you his best."