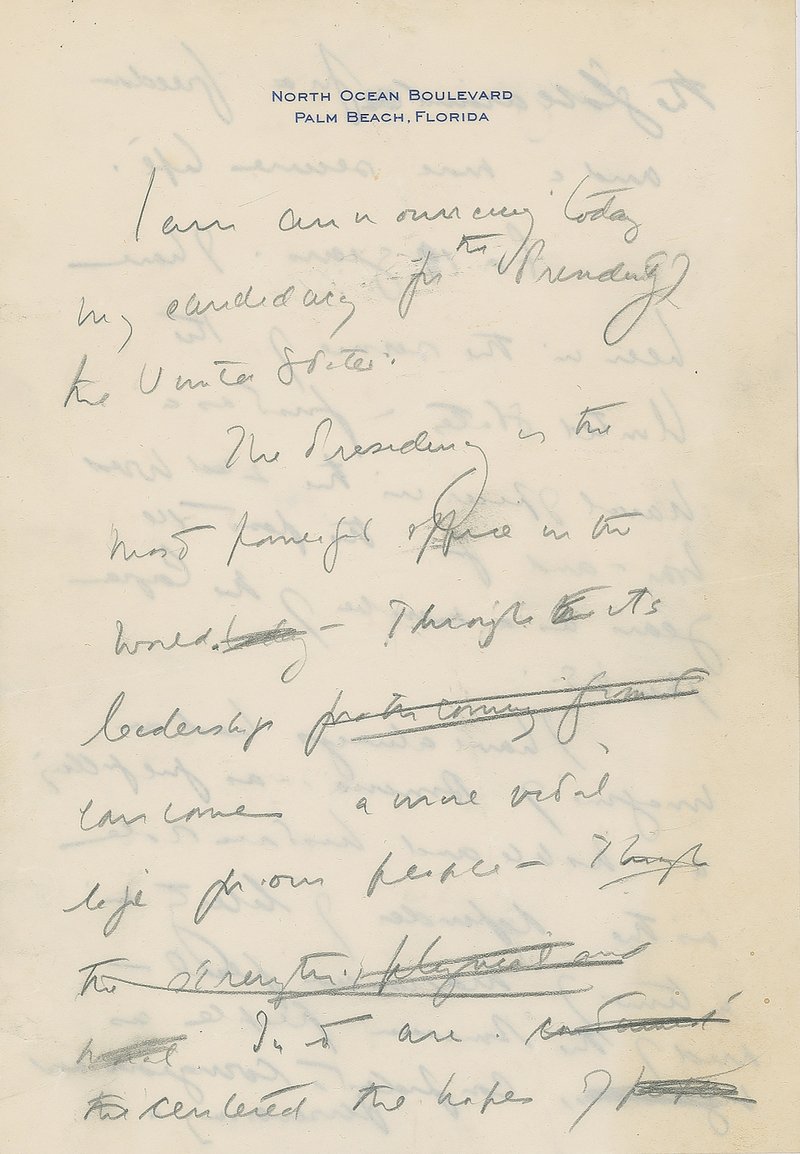 This December 2019, image released by RR Auction shows the first page of a handwritten draft of the 1960 speech by John F. Kennedy announcing his intention to run for president. The draft is among hundreds of items associated with the late president to be auctioned in January 2020, by the Boston-based auction firm. (Nikki Brickett/RR Auction via AP)

Private letters and other items that had belonged to Edmund G. "Pat" Brown when he was governor are being offered by the auction house Sotheby's, which estimates the value at $20,000 to $30,000. Sotheby's says the seller wants to remain anonymous.

The elder Brown, who died in 1996, was California's top elected official from 1959 to 1967 and eight years later his son started the first of his record four terms as governor. Jerry Brown was not consulted or informed of the sale and believes the items should instead reside at the University of California, Berkeley.

"I'd sure like to know why the seller is claiming anonymity and why these documents aren't at the UC Berkeley archives with the rest of my father's papers," Brown said in a statement to The Associated Press.

Sotheby's touts Brown's materials for sale as unique because "it comes from a single source" and that it "chronicles a country in mourning." The auction opens Monday.

Among the items are a letter from Kennedy to Brown written days before the assassination. In it Kennedy thanks Brown for supporting his tax-reform program. There's also a handwritten note from President Lyndon Johnson sent 10 days after he succeeded Kennedy. Johnson wrote: "Pat, I'm depending on you in the West."

There's also a copy of the first AP news bulletin sent after Kennedy was shot. It read: "President Kennedy was shot today just as his motorcade left downtown Dallas. Mrs. Kennedy jumped up and grabbed Mr. Kennedy. She cried, 'Oh, no!' The motorcade sped on."

Other items being sold include a letter from Kennedy's widow, Jacqueline, sent two years after the assassination. She expressed her "deepest appreciation" to Brown for contributing oral interviews to the John F. Kennedy Library.

While political allies as fellow Democrats, Brown and Kennedy were not particularly close personally, according to Ethan Rarick, who researched Brown for the biography California Rising. He suggested the items on auction may come from someone in Brown's administration.

"I'm guessing that someone in Pat Brown's administration probably just saved those pieces for autograph value," Hanff said. He added a collector would have more use for it than a scholar.

"There's not as much value for research," he said.

The auction from Sotheby's is part of its Americana collection sale, which includes a letter from John Hancock announcing the adoption of the Declaration of Independence, estimated to be worth up to $800,000.