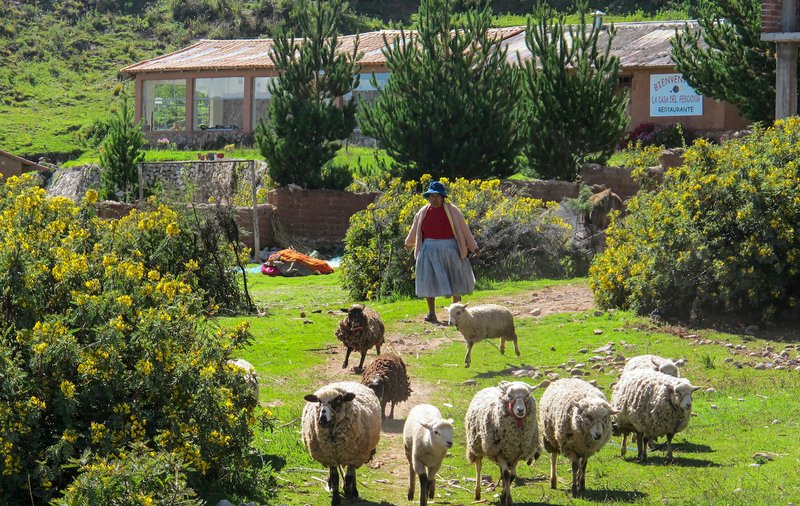 Luquina Chico offers visitors a chance to live in a rural community that has changed little over the decades. By offering homestays, a practice known as turismo vivencial, the community has set up an economic model where the local families can benefit equally from guests. (TNS/Thomas Curwen)

PUNO, Peru — In the beginning, there was a lake cradled in the mountains of a high plateau in the Andes. How it got here was simple: The universe cried, and its tears flooded the world. Mankind had disobeyed the gods, and the gods sent in pumas. Lake Titicaca — literally, pumas of stone — is proof, tragedy burnished into beauty.

Standing on a quay in Puno, a city on the lake's western shore, my wife, Margie, and I stared at its cerulean expanse, an autumn sun reflecting off what has been called the eye of God. Not a breath of wind stirred the water, the Donald Duck and Goofy paddle boats imperturbable.

Our Peruvian itinerary had included Machu Picchu, but this morning vista surpassed the splendor of those ruins, whose images on calendars and coasters, snow globes and refrigerator magnets are burned so deeply in the mind that the reality seemed almost derivative.

There was no mistaking the originality of Lake Titicaca, straddling Peru and Bolivia.

It seemed less terrestrial than something borrowed from the sky, and on that morning it held the world in its grasp, its mirror-like stillness soon rolling in the wake of a water taxi.

Our destination was Luquina Chico, less than 90 minutes from Puno, where I — along with students and professors from Chapman University in Orange, Calif., where Margie teaches — would stay with local families for two nights.

The students, drawn by the lure of three units, were promised the opportunity to "explore the Peruvian leadership approach to community development," but the lessons were greater than this.

The residents of Luquina, increasingly dependent on visitors like us, know that unregulated tourism, an easy temptation in a region as beautiful and undeveloped as this, can tear apart communities.

They are trying to develop a sustainable model that gives every household an opportunity to prosper and preserves the tranquility of the village. Finding that balance is not easy.

Although most travelers will not visit Peru as part of an education tour, what we saw and experienced, service learning, is available to anyone willing to pack, as we did, a pair of work gloves.

Lake Titicaca, an hour and a half by plane from the capital Lima, is a world apart in politics and culture. When we were here, in spring 2018, President Martín Vizcarra had just been sworn in (he went on to dissolve Congress this past September), but the focus in Puno then was a football match between Peru and Croatia. Peru won.

Our guide was Edgar Frisancho, whose agency, Edgar Adventures, is one of a few companies in Puno that arranges tours of the lake. Frisancho was born in central Peru and moved here when he was 16 to escape the violence of Shining Path revolutionaries.

Thirty years later, he speaks easily about the region's history and of traditional values shifting under economic pressures. Lake Titicaca, he said, "has seen more changes in the last 30 years than in the last 500 years."

The conquistadors' encounter with the Incas was violent and cruel, but what is occurring today is as dramatic and irrevocable.

It stems not just from environmental changes, the internet or even the building of roads, but from visitors like us and the villages that compete for our attention. 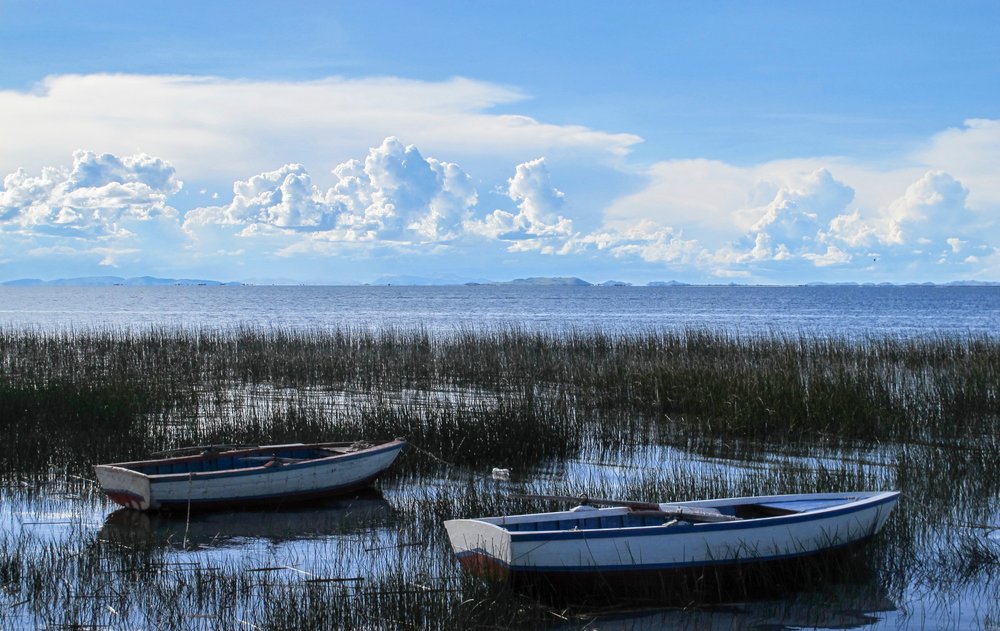 The residents of Luquina Chico anchor their row boats near the shore of their village, which looks out upon the vast expanse of Lake Titicaca. By mid-afternoon, distance thunderheads create fantastic cloudscapes in the sky. (TNS/Thomas Curwen)

Traveling once meant blending in to a foreign land, and the conspicuousness of a tour was something to disdain.

Disappearing into a culture and a country might be possible in cities where internationalism has planted its flag, but it comes at a cost in rural communities. That cost, according to Frisancho, is no greater than on the shores of Lake Titicaca, a world as delicate as it is beautiful.

Our first stop was Uros Titino, one of the lake's famed floating islands, home of the Uros people who came here from the Amazon centuries ago and survived on these waters as scores of invaders passed over the land.

The water taxi pulled alongside a floating hayloft. The ground underfoot was soft, uneven and pliant. Seven families lived here, and we gathered in the warm sun to hear how they maintained the island, cutting and bundling totora reeds. Afterward, they laid out their colorful textiles and carvings for sale.

I climbed a ladder to a small platform, where I tried to imagine living here, this nexus of water, island and sky no bigger than a tennis court, so removed and yet imperiled by a faraway world.

When Frisancho visited these islands years ago, the Uros were self-sufficient. The birds and fish of the lake provided all they needed, but that has changed.

Lakes such as Titicaca, in the Altiplano, a high plateau in the Andes, get most of their water from rainfall, and they are evaporating as the Andes warm. Invasive species and over-fishing also threaten the fragile ecosystems.

Diminishing resources have made living on the floating islands more difficult, but tourism has helped. Some Uros have moved their islands closer to Puno so travelers can reach them, and a neighboring island lists a reed hut on Airbnb.

At the end of our visit, we boarded a reed boat and a young man gently sculled us across the water. His boat, he said through a translator, took two months to build. Beneath the bundled reeds were 3,500 plastic water bottles.

A boat made of reeds lasts nine months, he explained, but a boat made with water bottles will float for two years. 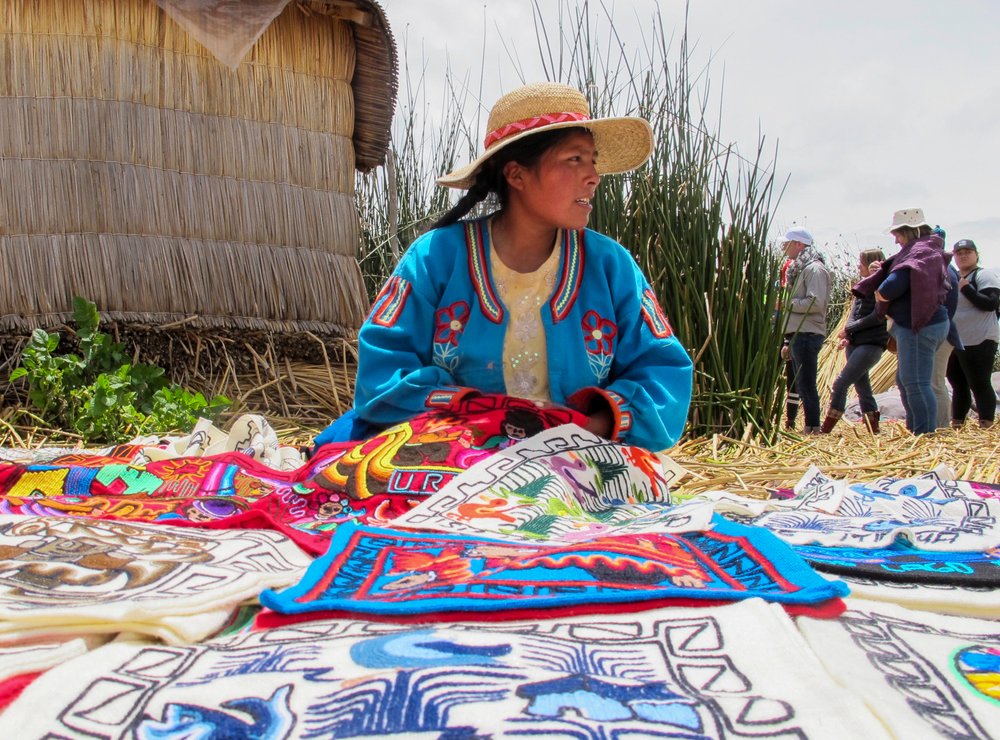 A young resident of a floating island on Lake Titicaca, an hour by boat from Puno, shares her work with visitors who have come to learn more about the traditional and modern ways of life on the island. (TNS/Thomas Curwen)

In early afternoon, the water taxi pulled up to the concrete pier at Luquina Chico. A string of fishing boats, oars still in oarlocks, floated listlessly in the reeds.

The village, rising on the lake's sloping shoreline, is a scattering of russet-colored houses, pathways, green lawns and fields of potatoes, fava beans and quinoa. Our host families greeted us in bowler hats, vests and embroidered jackets.

Luquina offers "turismo vivencial" — experiential tourism — of which home stays are a central feature. Margie and I were assigned to Fernando and Yrene Gutierrez, whose home was just beyond the school and football pitch.

Our room was off a small courtyard. After settling in, we joined Yrene, who served us a lunch of quinoa soup with chicken, rice and potatoes.

If a trip into the Andes means falling back in time, we gladly fell.

The peace and quiet of Luquina, well outside the congestion of Lima, Cuzco and Puno, was unmatched. After our first night, we felt the pulse of a community whose habits and practices had seemingly never changed.

But we knew that the families of Luquina were trying to develop an economy that balanced modern necessities with tradition.

For years, they had watched water taxis on the way to Taquile Island, known for handicrafts, and wondered how they might divert those travelers. A tourist economy would mean money to replace thatched roofs with corrugated ones, buy school supplies, pave a well-trod path. The men and young people could stay home and not migrate offseason to the cities.

But the residents wanted to make sure all families profited equally.

With the help of Frisancho, who owns a home here, they adopted turismo vivencial, which is administered by the village council so each family would benefit. Because Fernando and Yrene opened their doors to us, another family would receive guests in the future.

The greatest threat to this practice, Friscancho said, are online booking services such as Expedia and Airbnb. They pit neighbor against neighbor, promoting competition inside a communal system, he said.

He cited two families that the government has assisted with internet connections and web design. These families, he said, have more clients and have built more rooms. "Soon they will have hotels," he added. 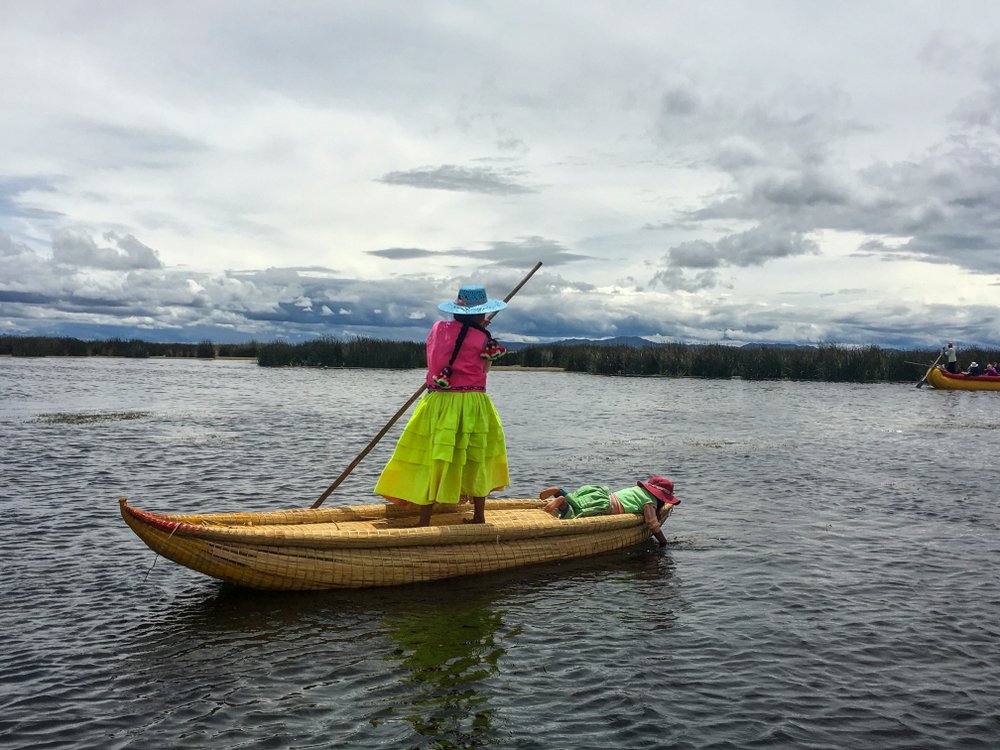 A young woman poles through the shallow waters of Lake Titicaca. Although the lake is nearly 1,000 feet deep, the Uros live close to the shoreline where the reeds grow and the lake is no more than 10 feet deep. (TNS/Thomas Curwen)

Early the next day, we broke out our work gloves and gathered on a patch of ground marked with plumb lines and trenches.

The village council wanted to build a restaurant so that families whose homes are too far away for visitors to reach with suitcases and bags, could contribute by helping to fix meals and extend hospitality. That day we broke ground.

The students, standing alongside the men and women of Luquina, organized into small groups. Some took up wheelbarrow duty. Others dug. Some hauled aggregate from the shoreline to the cement mixer. Others bent and cut rebar for columns and foundation.

We grew winded from our exertions. Lake Titicaca lies at 12,500 feet. At noon we took a break for bananas, bread, bologna and cheese. Our labors had drawn us close to the men and women of Luquina, and we exchanged stories of our lives continents apart.

By late afternoon a breeze had kicked up, and the lake turned into a carpet of sequins. Tall thunderheads rose in the east over Bolivia.

"We are grateful of your support," Luis Ascencio, the village judge, said at the end of the day. "On this beautiful afternoon, we feel very proud. The work you have done is very beautiful."

Against a stormy sky, we climbed the hill to the school and, after an impromptu game of soccer with the children, the men and women dressed us in skirts, vests and bowlers and taught us to "cashua," a traditional courting dance.

Ascencio played the quena, an Andean flute. Another man kept rhythm on a drum. 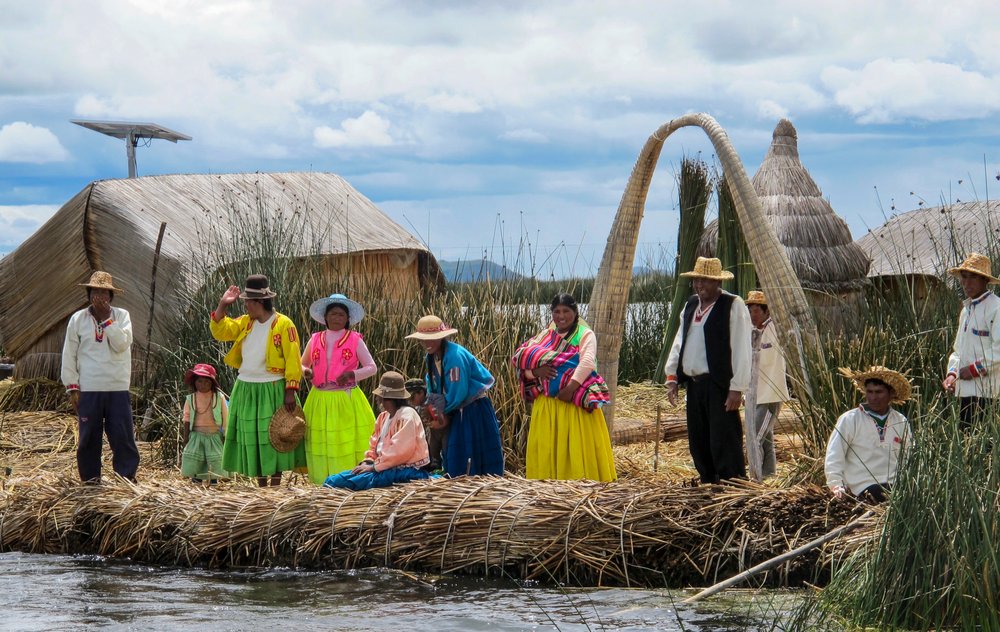 Grateful for visitors, Antonio Jullahui and the other residents of a floating island on Lake Titicaca gather to wave goodbye to their departing guests. The Uros economy is largely depended upon tourism. (TNS/Thomas Curwen)

When faced with intractable problems, the best wisdom, Frisancho told us, is to embrace ancient wisdom, best summed up in a word: "ayni."

Ayni, he explained, is Quechua for reciprocity. "I give, and I receive. I help you. You help me. It is a circle of energy, the foundation of this culture, both cause and effect."

The next day we left Luquina and spent a day kayaking and hiking on Taquile Island and enjoying a lunch of fava beans and trout, sweet potatoes and bananas, baked underground.

On our return to Puno, the students commandeered the water taxi's loudspeaker to play music from their phones. There was singing and dancing to ABBA and the Beach Boys, and we lifted glasses in a toast of Pisco de Italia, the regional brandy, to those pumas of stone.

Homestays at Luquina Chico, Taquile Island and other destinations can be arranged through: