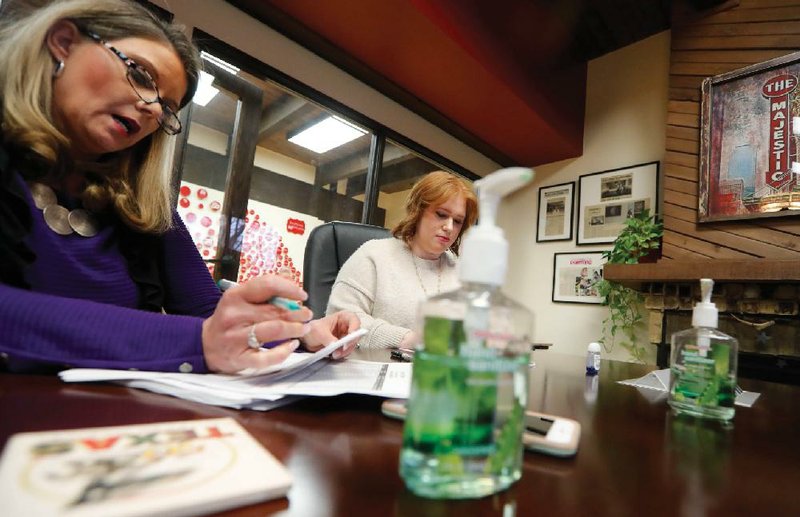 NEW YORK -- As this winter's flu outbreak intensifies, small-business owners try to keep their companies from being overwhelmed by employee absences.

At Gold Medal Wine Club, any surfaces people are likely to touch, including the coffee machine, water dispenser and doorknobs, are wiped down and there's hand sanitizer on every desk. The 11 staffers are expected to sub for one another when someone's sick, something that's critical when orders for wine pour in.

"We want to be sure our phones are answered," says Kelsey Chesterfield, marketing manager for the Santa Barbara, Calif., company. "If some people are out sick, others have to come in earlier."

The flu can be devastating for small businesses. If a company with just a handful of employees has two or more out at once, it can be difficult or impossible to get the work done. So owners pay for flu shots and use disinfectants in hopes of keeping everyone healthy and urge sick staffers not to come to work. And, as Gold Medal Wine Club does, they train and reassign staffers to cover for sick colleagues.

"Nothing harms our ability to hit deadlines more than a spreading flu through the ranks of our staff members," says Alex Kehoe, co-founder of Caveni, a website design company that has 10 employees at its Philadelphia headquarters and more than 10 others who work remotely.

When Kehoe's staffers start having flu symptoms, he encourages them to stay home. Kehoe follows his own advice; he was working at home with a bad cold while being interviewed by phone for this story.

This flu season started early and all but two states reported widespread outbreaks by the week that ended Jan. 11, according to the U.S. Centers for Disease Control and Prevention. From 1982 to 2018, the flu most often peaked in February, so there's a good chance the rest of the states will see their cases increase this year.

There may be even more concern about illness spreading at work after news that a Washington state man traveling in China contracted a virus that has killed several people and sickened hundreds more in that country. The man was hospitalized near Seattle late last week.

Jo Trizila's firm has five employees and no wiggle room when flu hits. Clients expect work to be done no matter what circumstances Dallas-based TrizCom Public Relations is dealing with. Trizila can find herself with 18-hour days to cover her work and a sick staffer's -- she has nowhere else to turn.

"We're not in a position to hire a temp because our jobs are so specific and so creative," Trizila says. "Someone can't just step in and do it."

Like many other owners whose work is done on computers and online, Trizila tells staffers they can work from home. But she's realistic that chills, sore throat and high fever can wipe out an employee's ability to do any work.

"You don't even check your phone, you feel so crummy," she says.

Like many owners, Trizila has encouraged staffers to get flu shots. The vaccines are fully covered under many health insurance plans and some owners arrange for employees to get their shots at work. At Gold Medal, staffers are paid $25 if they get flu shots although vaccinations are covered under the company's insurance.

But owners often can't require staffers to be vaccinated, says Rick Gibbs, a consultant with human resources provider Insperity. Some employees may be covered by the Americans with Disabilities Act, which prohibits employers from requiring employees to undergo medical procedures. However, people who work in health care facilities can be required to be immunized.

Staffers whose work is done at customers' homes and businesses are at risk not only of spreading the flu but also of catching it. At Christina Clark's Molly Maid home cleaning franchise, some customers who are sick want their homes cleaned and sanitized anyway.

"As soon as we find out someone is sick in a home, we do ask that we reschedule the cleaning until they are feeling better," says Clark, whose company is based in Pensacola, Fla.

Clark contracts with a company to give staffers flu shots at work. If she has several staffers out of once, it makes it harder to do all the scheduled cleaning jobs; it's not the kind of work that Clark can hire part-time workers to do.

"I wouldn't be comfortable with having someone I didn't know going to a customer's home," Clark says.

'SHOW MUST GO ON'

The employees at Vinnie Sposari's Mr. Rooter Plumbing franchise have to be careful about germs year-round. Working with bathrooms, kitchens, drains, sewer lines and septic tanks exposes people in the plumbing business to the possibility of all kinds of illnesses.

It's standard practice at Sposari's Seattle business for plumbers to put drop cloths down before putting tools on a surface, Sposari says. That's meant to protect staffers and customers.

Galle does the best she can to help staffers stay healthy or have an easy recovery. "I have a no-questions-asked policy right now regarding work from home. If you are ill, don't come in," says Galle, whose company is based in Ferndale, Mich.

When her staffers get sick while running an event, Galle has backup plans including a network of freelancers who can fill in when someone gets sick.

"The show must go on," Galle says.