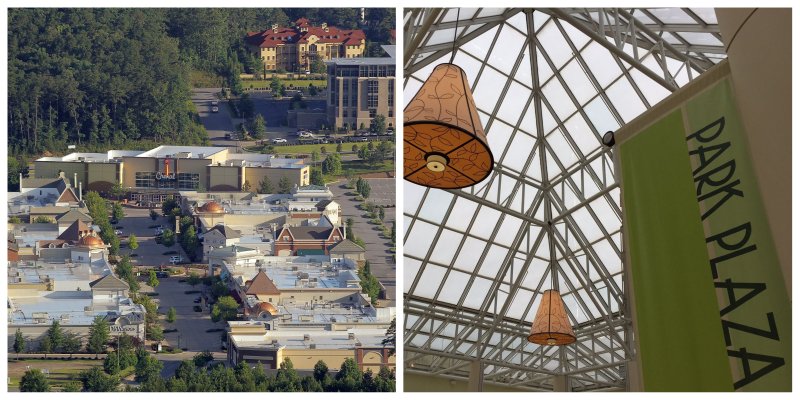 The Promenade at Chenal, left, and Park Plaza mall are shown in these file photos.

Three major Little Rock shopping centers have fallen steeply in value in the past decade, partially the result of changing consumer habits triggered by online shopping.

The troubled retail centers range from Park Plaza, a fixture in what now is the midtown section of the state's largest city and Little Rock's only enclosed mall, to the newer and more posh Promenade at Chenal, a 340,000-square-foot open-air lifestyle center in west Little Rock.

Both have plans to reverse their fortunes, which include increasing the mix of restaurants and other entertainment options to reflect a shift in consumer preferences and, in the case of the Promenade, at least, an injection of capital.

Park Plaza's difficulties stem from declining sales and rents, according to a recent Morningstar report. As a result, its owner may have trouble making payments on a $78.6 million commercial mortgage-backed security loan, the report said.

Meanwhile, the high-end Promenade at Chenal recently changed hands for $10 in cash and other unspecified considerations "in lieu of foreclosure," according to real estate documents maintained online by the Pulaski County clerk's office. The Promenade opened in 2008 with a $79 million price tag.

The buyer and sale price were not disclosed when the sale was announced in December. The Pulaski County assessor values the property at $38.4 million.

A third shopping center, Shackleford Crossings, also in west Little Rock, sold last month for $10.5 million, a quarter of the $42 million price tag when it last sold in 2011.

The development at Interstate 430 and South Shackleford Road is anchored by two prominent retailers -- a Walmart Supercenter and a JCPenney -- but 40% of the remaining 288,745 available square feet for lease is empty, according to Loopnet.com, an online database for commercial real estate available for sale or lease.

Bankruptcies continued to be a driving force, according to Coresight. This included announcements from Sears, Forever 21, Payless ShoeSource and Destination Maternity.

Park Plaza has seen two national retailers announce in recent weeks they are vacating the property. Banana Republic and Gap Inc. are scheduled to close their stores today.

But the Morningstar report, published last month, said the mall's financial condition was deteriorating long before those retailers decided to vacate.

Its concentration on malls in secondary markets has left CBL struggling, the report said.

In December, the company announced it was suspending all future dividends on its common and preferred stock to "preserve free cash flow as it anticipates a decline in net operating income in 2020 as a result of heightened retailer bankruptcies and store closings in 2019," according to the report by Steve Jellinek, vice president of CMBS Analytical Services for Morningstar.

He noted that the "largest loan of concern is the already struggling $78.6 million Park Plaza loan." Jellinek said the commercial-mortgage backed security loan was transferred to special servicing in June.

The Promenade at Chenal's financial situation is harder to discern. A limited liability corporation called TOCU I, was listed as the lender in a partial release of mortgage and assignment of rents filed on Aug. 15. TOCU I's authorized person is listed as Russell Gannaway, portfolio manager for alternative credit strategies in the Newport Beach, Calif., headquarters of PIMCO, a global investment management firm.

TOCU I LLC also was the grantee for the warranty deed recorded in lieu of foreclosure on Dec. 17 from Little Rock Development Co., which was the limited liability company that RED Development, a Kansas City, Mo., firm, used to build and operate the Promenade.

Laura Batty, senior vice president for corporate communications at PIMCO, said in an email the company would have no comment.

A report released this month by the International Council of Shopping Centers suggests retail centers and malls are shifting strategies to remain viable. The report, "Retail Real Estate Transformed," said the emergence of service tenants in shopping centers is changing the traditional tenant mixes and reshaping shopping centers.

The report said that the media has focused too much on store closings and is overlooking a larger trend that has seen restaurants and other service tenants grow.

Mirroring that trend, a California-based real estate investment trust, Four Corners Property Trust, recently paid $4.2 million to purchase the commercial property occupied by BJ's Brewhouse, at Shackleford Crossings. It has been under a ground-lease by BJ's since 2014. That lease is in place through 2034.

Park Plaza's owners said they have plans to reinvigorate the property, suggesting the mall will be joining the trend to add more service industry options.

"Park Plaza continues to be a favored destination in the Little Rock market," Stacey Keating, senior director for public relations and corporate communications for CBL, said in an email. "As consumer preferences shift, we are responding by delivering new stores and experiences at our centers. Our leasing team is in discussions with replacement tenants. We'll be excited to share more information as plans move forward."

Newmark Moses Tucker Partners of Little Rock is managing and leasing the Promenade for the new owners. Newmark's president and chief operating officer, Chris Moses, said the shopping center is adapting to the new retail environment.

"We have an existing site plan that warrants it, very strong existing tenants -- with AMC, Apple, Lululemon, Anthropologie," he said. "Our goal is to create that sense of place. This is where the world is going to. If you want to get people out off their computers purchasing, then you've got to create an experience for them."

Newmark will be announcing several tenants in the coming weeks, including one or two that are new to the area and a few others relocating to the area, Moses said.

They include "everything from local breweries to fresh produce to women's apparel to outings for children," he said. "It's not just for a household of four and the wife to go in and go visit one store and leave.

"What we're trying to create is an experience for a family to go in and spend a few hours, not just have shopping but have entertainment and other mix uses out there that creates a sense of place, much like an old downtown would create."

The owners also will provide the necessary capital, which will pay for more walkable site, new landscaping and facade enhancements, Moses said.

Newmark is trying to make the property more accessible to surrounding developments, which soon will include a new hotel and an apartment complex.

The $13.5 million Aloft at Promenade, a 123-room hotel on Rahling Road, is nearing completion. A $34 million apartment development, the 331-room Fitzroy Promenade, is under construction directly behind the Promenade.

Plans are being made to connect the Promenade's retail spaces to the new apartment complex, Moses said. "We're continuing that discussion and like what they're doing," he said.

Moses said the Promenade's new management team is fully staffed. "Our focus ... is to contribute capital, push the value, enhance the entertainment and retail aspects, create a walkable environment and really focus on tenant retention and outreach." 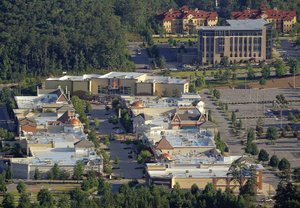 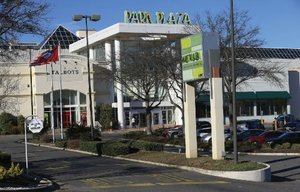 The managers of Park Plaza mall, a retail fixture in Little Rock’s midtown, say there are plans to change the mall’s mix of tenants to better meet shopper preferences. (Democrat-Gazette file photo)