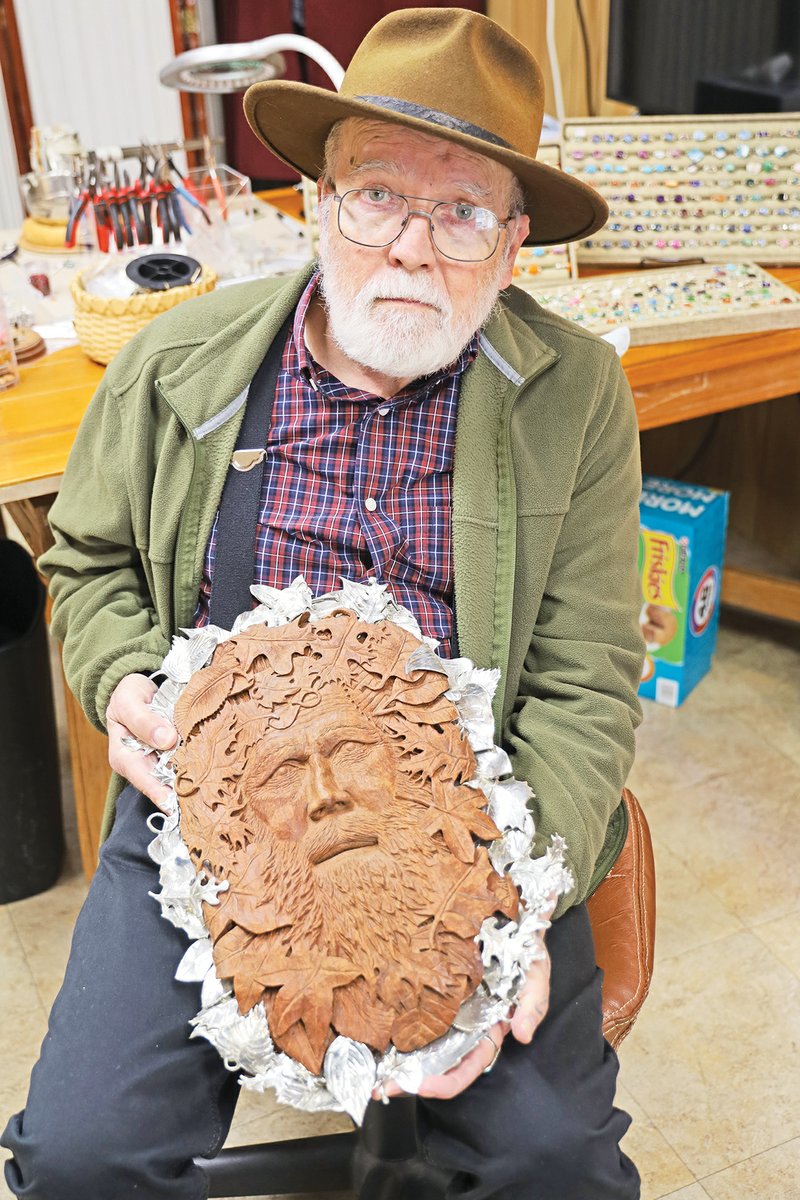 Charles Widmer holds a carved wood self-portrait, surrounded by metal leaves. During his career as a woodcarver, he completed hundreds of art pieces, including a massive eagle for President Jimmy Carter’s presidential library.

Artist Charles Widmer of Mountain View cradled a self-portrait woodcarving for a photo. In real life, Widmer has sparkling eyes and a droll sense of humor, something impossible to duplicate in a carved image. Still, the piece speaks about the core of the man, about coaxing beauty from the discarded or the overlooked. Widmer grinned subtly and handed the plaque over to go back up on the wall.

“I’m a nuts-and-bolts guy,” Widmer said. “I’m good to get out in the woods and chop firewood and pulpwood, and I take that kind of attitude to doing [art].”

“At my peak, I could carve fast. Y’know those 50-gallon trash cans? I’d put enough chips on the floor for three of them in a day, just with a mallet and chisel. I was very fast back then.”

There’s very little to point to in the workshop now of those days, save some smaller pieces in a curio hutch and a binder of photos of breathtaking past projects. Widmer got out of woodcarving about 15 years ago, the strain on his legs finally winning out over his God-given ability to pull forms from within the wood to the surface, he said.

He didn’t so much retire as reinvent himself as a metal caster and jewelry maker, he said. And that handiwork is everywhere in the home workshop he shares with his wife and fellow artisan, Linda.

“She and I have been working together for over 40 years,” he said. “Anything I do, she has done with me. It has always been a partnership.”

Widmer has been in Mountain View for more than 50 years, and much of what happened before that time he doesn’t seem to want to talk about. When asked when he got to town, he said with an impish half-grin, “in the hippie days.” When asked where he was born, he said, cryptically, “Some other planet. Nowhere around here,” followed by a dismissive wave of a gnarled hand to move on.

But for all of the artistic beauty he’s created — completely self-taught, by the way — and for as fine a touch as it takes to breathe life into block after blank block of wood, Widmer said his attitude has always been to look to make a living first and to leave an artistic legacy second.

“When I got here, I cut firewood, mostly, and pulpwood. Cut a lot of pulpwood,” he said. “I have cut wood all through my adult life just to earn a living, make money as I went along. If carving slowed down and the tourists quit coming, which they often did, I would cut pulpwood.”

“Back then, it was $10 a year. You get a permit, and you could cut all the wood you wanted. And that’s exactly what I did. I cut it, and I loaded it on that old truck. Hardest work I’ve ever done, before or since. It’s just brutal.”

It’s something of a process to reconcile the two sides of Widmer: a day laborer hacking down cords of some wood for pulp and a carver of stunning Native American chieftains in resplendent headdress out of other pieces of wood.

Even his decision to settle in Mountain View and its thriving artist community has a duality to it. Yes, there were kindred spirits here, but mostly there was a market, he said.

“[Mountain View] is touristy, and if you have tourists, you can sell your artwork. That’s who buys it,” he said. “You’re not going to go down to a farmer in the Delta and sell him a woodcarving. You know, they’re too busy buying tractors. It’s the population in a given area that fuels the kind of economy that works. Up there in the northern part of the state and here, we’re tourist-oriented.”

Widmer’s catalog of predominantly Western and Native American subjects weren’t always his choice, he said, but they sold. And as he quickly learned, people often bought or didn’t buy art based on the artist as much as the artwork.

“I can remember years ago, going up to the courthouse square with my pocketknife,” he said. “I had a couple of handmade tools and sat on the courthouse square, whittling, and people would come up and ask me, ‘Well, where are you from?’ Immediately, I’d fake an accent. ‘Well, ahm jus’ from righ’ heah, don’t you see?’

“You gotta give them a little story along with the show. It helps you sell stuff. I got pretty good at that over the years.”

Linda gently rolled her eyes in the background at the story. She admitted she’s less gregarious than he is, but Widmer calls her critical to who he is and what they do in life. Unlike Charles, she grew up here, leaving once as a roommate of a friend who was enrolled at Arkansas State University in Jonesboro. It was an idea that lasted 24 hours before she asked her mother to come get her. Charles entered her life a couple days after that.

“She went and got her old job back as a waitress in a little flophouse-type restaurant,” Charles said.

“And then he walked in and ordered a cheeseburger, and three days later, we left,” Linda said. “He was living in Branson then. We’ve never been apart since.”

The couple have been through numerous adventures in life, art and business. There has been a piece done for a president — a massive eagle sculpture ordered for Jimmy Carter’s presidential library — as well as ornate furniture pieces for assorted U.S. senators and other dignitaries. The accomplishment was captured in a local newspaper clipping and marked by a hand-written thank-you letter from the former president himself. both of which hang on the workshop wall.

“Worst carving I ever did,” Widmer said. “Artistically, it was an excellent piece, but there was something about that carving that changed my attitude toward carving.

For 20 years, Charles and Linda owned Ozark Artisans Mall in Mountain View, an operation that grew to include products from more than 60 local craftspeople. One day, a woman from California walked in, paid double what [the business] was worth, Charles said, and that was that. Then the couple spent another 20 years teaching classes and selling their art at the Ozark Folk Center, a tenure for which Charles was recently honored by the center for longevity in promoting the arts and the organization.

Today, health concerns have pulled Charles into retirement from the Ozark Folk Center, but he still spends regular time in the workshop, making jewelry or casting metal ornaments, he said.

He specializes in rings because, he said, they’re hard to do, and most artisans don’t like doing them, including Linda. That’s just fine with him, as his creations and hers perfectly complement each other, he said.

“I have that kind of personality where I do better alone, but Linda and I, in the 40 years we’ve been working together, have never had a minute of trouble,” Charles said with a chuckle. “She’s boss, and I know it. As long as we stick with that, we’re good.”