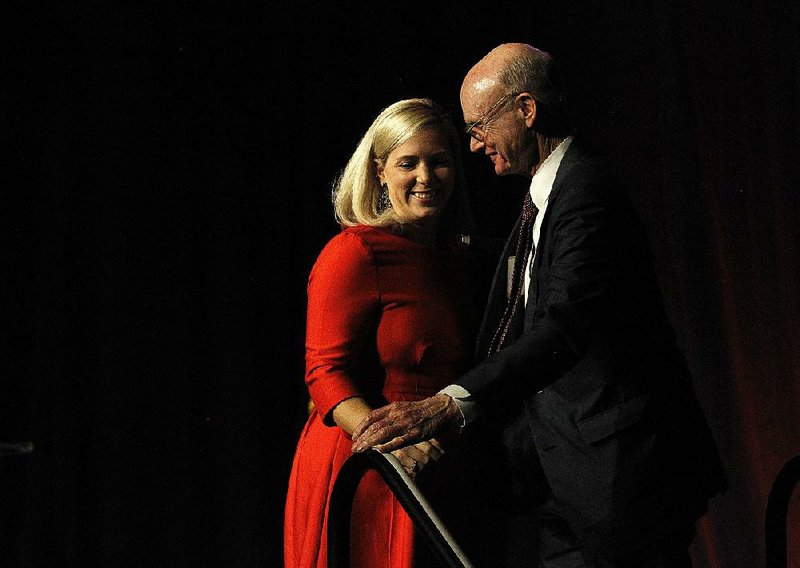 Walter E. Hussman Jr. hugs his daughter, Eliza Gaines, vice president of audience development of WEHCO Media, as she leaves the stage during the 200th anniversary celebration Thursday at the Statehouse Convention Center in Little Rock.

Eliza Hussman Gaines has been named managing editor of the Arkansas Democrat-Gazette, succeeding David Bailey, who is retiring.

Walter Hussman Jr., the newspaper’s publisher, held successive announcements for the personnel changes on Monday, about 30 minutes apart in the Democrat-Gazette’s newsroom.

Gaines has been vice president of audience development at the Democrat-Gazette and other newspapers operated by WEHCO Media. She is Hussman’s daughter. She is a former editor of the Sentinel-Record in Hot Springs and worked as a travel reporter for the San Francisco Chronicle before earning a master’s degree in journalism in 2012 from the University of North Carolina.

“I’m excited to get started,” Gaines said in brief remarks.

Gaines is the fourth generation of his family to be in newspapers, a relationship that began in 1909, Hussman said.

Gaines will be the paper's first top female editor since its founding in 1878.

David Bailey, managing editor of the Arkansas Democrat-Gazette since 1999, will retire March 16, ending a 27-year career at the paper, he said Monday during a staff meeting.

Publisher Walter Hussman Jr., who attended the gathering, didn’t immediately name a successor but said another announcement would be made a few minutes later.

"The best thing that can happen to a publisher is to have a really good editor,” Hussman said, adding that Bailey was one of those, and only the fourth top editor of a newspaper he’s owned for 47 years.

Bailey, 70, has been the newsroom’s top editor since the resignation in May 2012 of Griffin Smith Jr. Smith’s position as executive editor was never filled.

Bailey, managing editor since January 1999, came to the newspaper in 1993 as assistant city editor. He was named city editor in February 1994 and placed in charge of day-to-day local news coverage.

Bailey said he intended to stay just one year. “The journalism was good, and the people I worked with were even better,” he said.

Known throughout the newsroom for his preference for a warmer climate, Bailey said he and his wife Twyla eventually will move to the Gulf Coast, where they own a condominium and spend much of their vacation time.

In 2009, the Arkansas Press Association presented Bailey with its Freedom of Information Act Award for his defense of the state’s open-records law. Bailey testified frequently before legislative committees that year on behalf of media organizations and other open-records advocates. He won a similar APA award in 2019.

Bailey was instrumental in the newspaper’s decision to dispatch a reporter, from March 2004 to March 2005, to cover the war in Iraq. He also dispatched a team of four reporters and photographers to cover Hurricane Katrina’s approach, and first days of damage, along the Gulf Coast and in New Orleans in 2005. Ultimately, a staff of 13 covered the devastation and after-effects for more than a month.

Read Tuesday's Arkansas Democrat-Gazette for full details and check back for updates.

This story was originally published at 2:45 p.m.