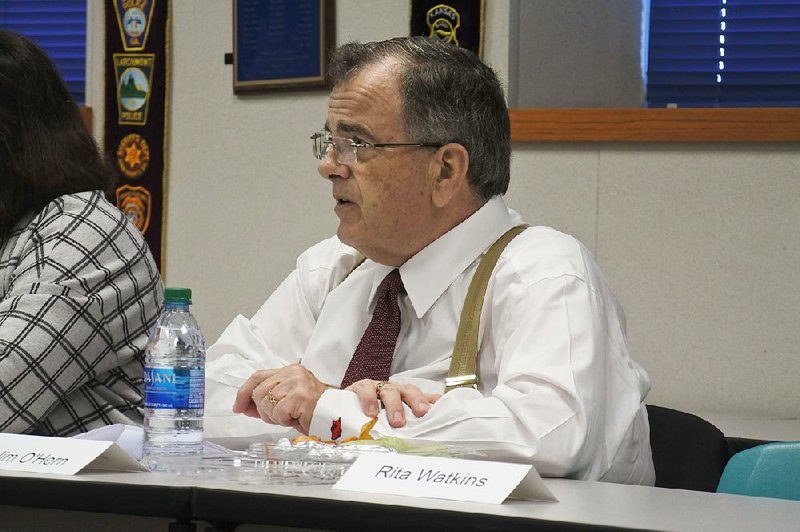 The Sebastian County Criminal Justice Coordinating Committee heard the suggestions during a meeting last week, part of a continuing discussion on how to help reduce jail bed needs and cost, as well as foster rehabilitation.

Sebastian County agreed in February to an assessment of the county's criminal justice system and jail needs with a team composed of the architecture firm TreanorHL, Studio 6 Architects and criminal justice planning consultants Mark Goldman and Associates to carry it out.

The reasons for this focus, according to Goldman's report, include reducing or better controlling the number of inmates and crowding in the Sebastian County jail; reducing the need to expand the jail or build a new one; and increasing the likelihood that offenders can pay their fines and fees. The report also stated that the cost of incarceration "usually" exceeds the fine amounts, and paying fines disproportionately affects the poor.

CRIME DOWN, INMATES UP

Goldman's report stated that the number of jail admissions in Arkansas more than doubled between 1994 and 2014 while crime rates went down slightly for property crimes and were "relatively flat" for violent crimes during the same period of time. Much of this increase was attributable, according to the White House Council of Economic Advisers, to people incarcerated for failure to pay criminal justice debts.

In the case of Sebastian County, Goldman's report stated previous studies, as well as the current one, indicate a combined 25% of bookings into the Sebastian County jail from Aug. 24, 2015, to Nov. 8, 2018, were for people whose only charges at the time of booking were failure to pay and other court-imposed charges, such as failure to appear and contempt of court. Twelve percent of this amount was for only failure to pay.

"On the contempt/failure to pay fines, every single warrant that we issue out of our office is a sig bond so that we can have an opportunity to question them in court and see whether or not they meet the criteria under the Bearden case," O'Hern said. "We don't throw people in jail for not paying their fines. We don't believe in debtors' prison."

Goldman's report stated that in Bearden v. Georgia the U.S. Supreme Court ruled defendants may not be jailed for failure to pay fines and fees unless a court concludes they willfully failed to pay or failed to make sufficient efforts to secure money for payment or determines no adequate alternatives to incarceration exist.

In regards to failure to appear, O'Hern said if a misdemeanant has "six or seven" of them, the Fort Smith District Court will usually set a $2,500-$3,500 legally sufficient bond with the intent of getting him to show up in court.

"And [the] objective there is they get a bail bondsman to get them out of jail, but I think even most of your failure-to-appears are going to be out of jail within 24 to 28 hours," O'Hern said.

"Generally, our failure-to-appears on felonies, we do retain them, because when they get that charge, they've usually failed to appear more than once," Maj. John Miller of the Sebastian County sheriff's office said.

One of the recommendations Goldman gave to the board was to implement methods to reduce the number of people in the jail for failure to pay fines. He went into detail on such means and the board provided feedback on each of them, with some already in place in Sebastian County to varying extents.

The suggestions were to:

• Ensure inquiries regarding a defendant's ability to pay are conducted before determining fees.

• Move payment due dates to Fridays. Goldman's report states many defendants are paid on Fridays, and are more likely to have the necessary funds to make a payment then.

• Seek and obtain assistance in paying fines and fees from local churches and charities that will accept community service from defendants in exchange for help.

• Conduct an "open court" time, with a fixed time per week to allow access to a judge for defendants having trouble making payments. This would be when a judge is on the bench without a set docket.

• Conduct "amnesty days" for people with existing failure to pay and failure to appear warrants to come settle or reestablish their outstanding payments/appearance schedules without fear of arrest.

• Make it so offenses that do not involve driving do not result in suspension of drivers' licenses. This is to ensure that a defendant's ability to hold a job and earn money is not restricted, thereby helping them pay fines.

• Modify the sheriff's process for contempt warrants for failure to pay and appear from arrest to serve and release.

Goldman also recommended implementing means of reducing the magnitude of people in jail for failure to appear by reminding defendants to appear in court in multiple ways.

His report states some defendants do not have a phone or permanent home. It is possible to send defendants notices of hearings not only by mailing them to their home address, but also by email, text messaging, telephone and in-person contact by way of a case manager or pretrial program officer.

"When none of these means are available to an individual, then the court should seek the same types of information about a parent, spouse, other close relative or friend, and that person should be contacted by mail, email, text, and/or telephone."

This is currently not being done in Sebastian County, according to the committee.

The criminal justice coordinating committee will meet again Tuesday to go over the rest of Goldman's report. This includes a recommendation to reduce the number of probationers returning to jail and prison by providing more incentives for those who comply with probation stipulations, as well as more options for probation violators.