WATCH YOUR LANGUAGE! Looks like the v-words wore out their welcome 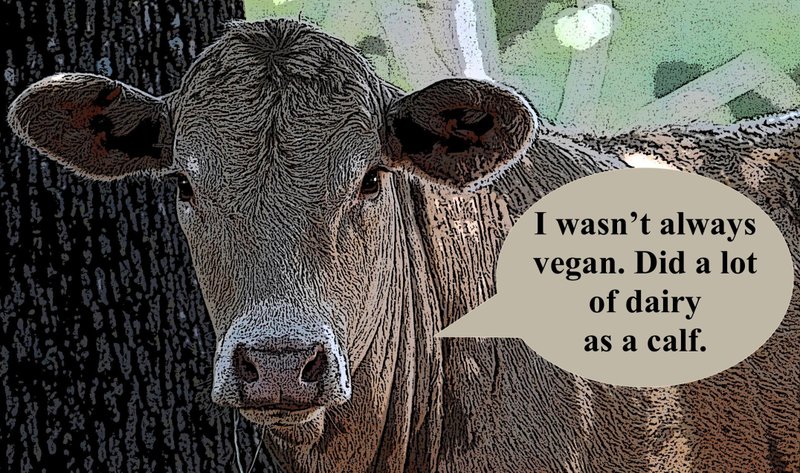 Recently, I've noticed the term "plant-based" used in a few commercials. I understood that the products advertised were meat-free. After a few weeks, I started wondering why they don't just say "vegetarian" or "vegan," depending on the food.

A reporter from The Associated Press apparently wondered the same thing more than a year before I did. Her conclusion was, "The worry is that the v-words might have unappetizing or polarizing associations."

Such thinking about "the v-words" was likely behind the founding of the Plant Based Food Association (though I don't know why they omitted the hyphen in plant-based).

Pat Brown, CEO of Impossible Foods, which produces meat-free meat (and uses "impossible" to replace "vegetarian") said, "For many people, their notion of a vegan is someone who's wagging a finger at them if they eat any animal products. I'm vegan. But for a lot of people that term — it's almost like a cult," he said.

This reminded me of a few other terms that slightly gloss over precision. A used car is "pre-owned." A gift is a "free gift." (It wouldn't be a gift if it cost anything.) On Twitter, even ads get a new name: "promoted content."

Let me know if you have any words or phrases to add to the list.

A reader asked me about words that begin with "re-" when that prefix doesn't mean "again." This is yet another example of why English can be so confusing to new speakers. We know the words that mean something is happening again: replay, retell, resell, reinforce, re-examine. But others don't mean that.

Refrain. The noun form of this word is what you hear repeated a couple of times in a song. Here's the refrain from the Beatles song "She Loves You."

She says she loves you

And you know that can't be bad

Yes, she loves you

And you know you should be glad

[and then you sing in a higher pitch] ooooh!

The word comes from the Old French for "melody." You don't sing a "frain" first, and then a refrain. Frain isn't an English word.

Renege. This verb means to go back on a promise or other action. I am always surprised at its spelling, considering how it's pronounced. It's a word with Medieval Latin roots. We don't "nege" anything.

Refute. This means to dispute something. It's from the Latin word for check or suppress. Is "fute" what you do the first time you hear something you don't believe? No.

Regard. The verb means to consider or appraise. It comes from the Anglo-French word for "guard." But "gard" isn't a word, and neither is "reguard."

INNOCENT VS. NOT GUILTY

When I started working at a newspaper all those years ago, The Associated Press Stylebook, which tells us which words to use and which to avoid, said to use "innocent" rather than "not guilty" in court stories. The story I heard from mentors was that newspapers used innocent because if the "not" was somehow omitted from the article, it would look pretty bad. The AP has since added that "not guilty" is more accurate. But it still adds the caution: "Special care must be taken to prevent omission of the word 'not.'"

One should probably be just as careful about not leaving out the word "guilty."

A couple of readers of my column about Lake Superior State University's "List of Words Banished From the Queen's English for Mis-Use, Over-Use and General Uselessness" sent me words and phrases that they'd like to be banned from the language.

Venue. A fancy word for a place or locale.

Relocate. It's shorter to use move.

Weather event. Rain event. These mean weather and rain. No need to add the "event."

Past history. Last time I checked, all history was in the past.

Ramp up and amp up. Remember that word "increase"?

Vintage. This simply means "old." It's not as pretty, but it's true.

And I'll add one of my least favorite words: "adulting." It's another noun turned into a verb and angers me a little more than it probably should. Do we need to tell people that we're acting our age?

Have you seen the commercial in which the woman arranging flowers says she tried to get legal advice from her ex-ex-ex-boyfriend? I began to wonder about what an ex-ex-ex-boyfriend was. I sent a tweet to the LegalZoom people, asking what it meant. Their answer was that it meant "three boyfriends ago." I thought it was that they were on again/off again a couple of times.

A self-described uninformed source asked where the phrase "stuck up" came from. It means snooty, snobbish or superior, but its origin is elusive.

A number of sites said it might have been a shortened form of the phrase, having one's "nose stuck up in the air." It's similar to "looking down one's nose" at someone. But no one was certain about where it came from.

Print Headline: Revealing words that sidestep other ones