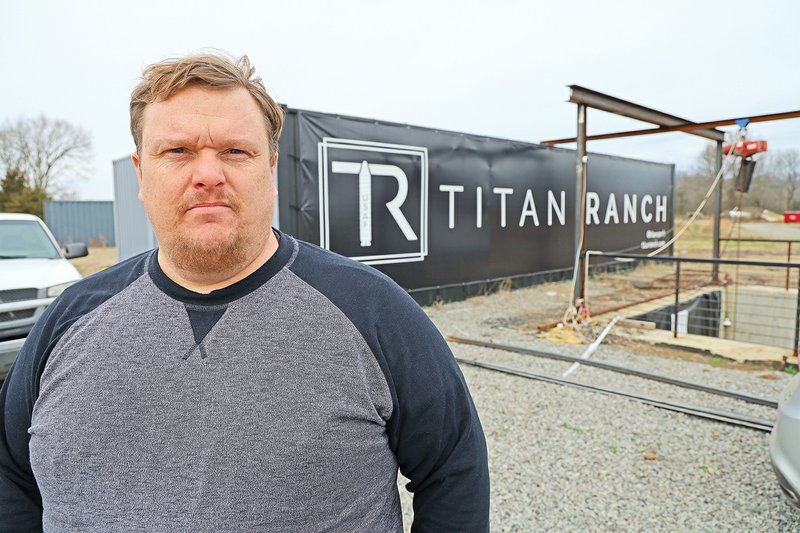 GT Hill stands outside the access chute to the missile silo. The site is one of 18 missile sites that exist in Arkansas, only two of which are open. “The most fun part of this project is figuring it out,” he said.

VILONIA — Aside from a large banner announcing one’s arrival to Titan Ranch outside Vilonia in rural Faulkner County, there’s not much to indicate the time machine lying underneath the surface. But descend the 35-foot custom-made staircase to a concrete slab adjacent to a 6,000-pound steel door, and it feels like you’re not in Arkansas anymore, at least not in 2020.

Here, in the bowels of a repurposed Titan II missile silo, there’s plenty to remind one of the itchy-nuclear-trigger phase of the Cold War in the 1980s. It’s the kind of place that reminds one of the 1983 movie WarGames, the mention of which perks up owner GT Hill’s ears.

“We watched WarGames down here. We have a little movie theater,” he said. “When we have students over, we usually feed them dinner down here, and we’ll always show WarGames. That’s like a tradition.”

In truth, Hill’s conversion of the former command module into its current configuration is more supervillain’s lair than retro 1980s. A massive projection screen flanked by two plasma white boards dominate one-half of the circular middle level, with desks set theater-style awaiting the next history class, IT training confab or one of a dozen other types of groups Hill has hosted.

Downstairs, a loungelike space boasts a high-end sound and light system and kitchen, while the upper level is still being built out. Hill has designs on turning that into an ultraexclusive Airbnb for those who want to sleep a few feet from where the end of the world was just a few keystrokes from commencing.

It’s also the first business to be featured in Disrupted! — an event sponsored by The Conductor in Conway, showcasing bold entrepreneurs who are changing the way business is done in central Arkansas with a particular focus on rural entrepreneurs.

“I think there is a common misconception that there is no innovation in rural Arkansas. That cannot be further from the truth,” she said. “Titan Ranch is a perfect example of people who live in smaller communities but still think big. We have an 11-county service area as part of The Conductor rural expansion, and I keep meeting people like GT who are just huge visionaries in a smaller community.”

Disrupted! attendees will get to experience the nuclear missile silo turned conference space from 11:30 a.m. to 1:30 p.m. Jan. 31, during which time Hill will discuss the facility’s transformation, followed by a tour and lunch. The event is free to the public.

“The purpose of this new Disrupted! series is to bring these businesses to light, tell people’s stories and to certainly inspire other people. Just because you are in a small town does not mean you can’t do something great and new and exciting,” Henry said. “We also hope to change the perception of rural Arkansas, and rural communities in general, so that other communities can see that there is stuff happening that they would have never considered before.”

Last year, Titan Ranch began operating as a one-of-a-kind conference-site alternative and has attracted a fair amount of business, even as Hill continues to home in on the silo’s market sweet spot.

“In business, it’s not smart to not be focused,” he said. “Well, that’s what I’m doing; I’m going against what I already know. The thing is, I haven’t really found that one thing that’s like, ‘That’s our revenue; let’s move forward.’”

“The biggest idea that I think has the most revenue potential is remote meetings. By that, I mean a lot of companies have remote employees, and they always have to find a place to come together. Well, what better place [than this]?”

“Thus far, this is a multiuse facility. We’ve had an 8-year-old’s birthday party with 40 people here. We’ve had surprise birthday parties. We’ve had corporate meetings. Universities have come out and taught here — Cold War history. [We’ve had] reunions for former Titan II [crew members]. We’ve had great feedback from all of them.”

The roughly 3,000 square feet of usable space over three levels sits inside the former command site of the launch complex, with a larger, yet-unexcavated silo just adjacent, from which the actual missile would have launched.

Titan II (SB-69B) was an intercontinental ballistic missile that came into service in 1963, according to the National Museum of the United States Air Force. At 108 feet in length and with an optimal range of 9,000 miles, the Titan II was the largest and most powerful American nuclear missile for a quarter century.

One key technological advantage was the weapon’s “quick launch” capability, as it could be deployed from underground silos in under a minute. The predecessor, Titan I, by contrast, took 20 minutes to prep and had to be fired topside, per the Museum website.

According to the Encyclopedia of Arkansas, deployment was approved by the U.S. Air Force in 1959 to include Strategic Missile Squadrons in Arkansas, Arizona and Kansas. The 308th SMW, based at the Little Rock Air Force Base, encompassed 18 Titan II launch complexes in Faulkner, Conway, White, Van Buren and Cleburne counties. The sites remained active until 1987, with 25 years of service.

In decommissioning the launch complexes, work crews demolished roughly the first 25 feet of the launch ducts, filled them, covered them with dirt and seeded the site, the Encyclopedia of Arkansas reports, to quickly assimilate to surrounding pastureland. Today, what was once the gateway to Armageddon has largely faded from the public’s collective memory.

Hill, a native Oregonian, hit upon the idea that would become Titan Ranch while stationed in Arkansas with the U.S. Air Force.

“I was getting a haircut one day and heard these old guys talking about the old missile silos,” he said. “I was stationed here, and I didn’t even know they were here.

“[Owning one] had been a dream of mine. I had read an article about a guy who had turned one into a house. Once I heard that these were here in Arkansas, I said, ‘I’m going to see if I can find one of these things.’”

Hill said that of the 18 former sites, two are open, and he’s had a hand in both. Titan Ranch, the southernmost Arkansas missile silo, was an in-depth education from the word go, he said.

“One of the things about building a place like this on a budget is that you end up doing things three times,” he said. “An example is the stairs you come down on; those are $10,000 stairs. Well, I couldn’t afford that 10 years ago, so it first was a ladder, then was a ladder to a small spiral [staircase] that I came across; then we built a big spiral, and then we went to the current stairs. Probably wasted $10,000 on all those other stairs I had built.”

“The most fun part of this project is figuring it out. There’s everything from the physics we have to learn about to water pressure and pumps you have to think about. There used to be a pole right here in the middle of the room. Does that pole hold this place up or not, right? Generally speaking, it’s fun to learn about that stuff.”

Titan Ranch is at 23 Missile Base Road near Vilonia. For more information or to register for the Disrupted! event, visit www.eventbrite.com/e/disrupted-gt-hill-with-titan-ranch-tickets-87193960483.