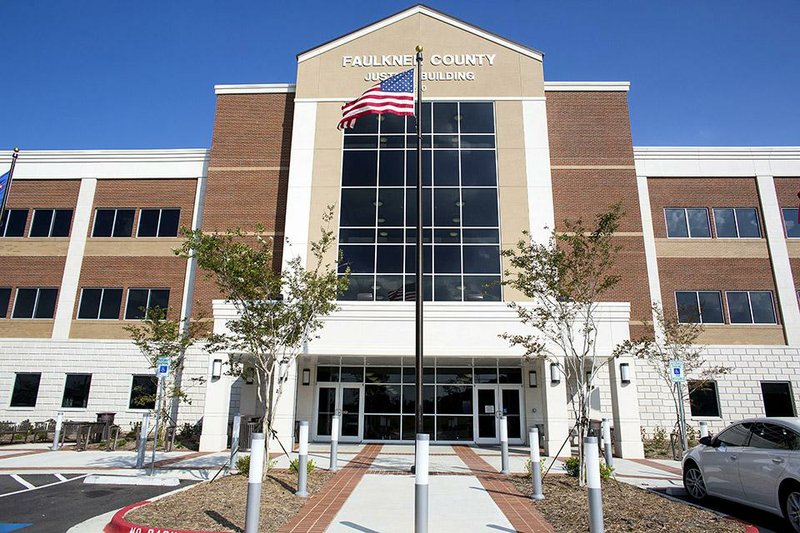 The Faulkner County Courthouse is shown in this 2014 photo. ( Melissa Gerrits)

CONWAY -- Years before he took the bench as district judge in Faulkner and Van Buren counties, Chris Carnahan saw as a young prosecutor that there was a disproportionate number of mentally ill defendants stuck in the criminal justice cycle -- and now he's in a position to do something about it, he said.

Carnahan -- who was appointed in late 2018 by Gov. Asa Hutchinson to fill the spot vacated by Judge Susan Weaver after she was elected as the 20th Judicial Circuit Division 1 judge -- kicked off a program this year that will allow nonviolent misdemeanor offenders to obtain mental health treatment in lieu of paying a bond or obtaining a bondsman.

"The basis for it is my years of being a deputy prosecutor and knowing that we've got people who don't have the means to even bond out on a very low bond on misdemeanor, nonviolent charges," Carnahan said. "It is my experience that they had something else going on in addition to the public intoxication charge, the criminal trespass charge, the disorderly conduct charge that would get them arrested to begin with. And knowing that there were several co-occurring things going on, criminal justice-wise, behavior-wise, mental health-wise, it's just something that's always been in the back of my mind. I'm finally in a position where I can start thinking about this."

Carnahan said he and his head clerk, Holly Belk, were discussing the mental health issue and trying to devise a program when they were approached by Harbor House.

Harbor House, a recovery program that supports those with addiction and behavioral issues, has partnered with the district court to provide mental health screenings for those arrested on certain nonviolent offenses and to develop a treatment program that includes therapy and medication management.

"They will work with the defendants and, if they're eligible, get them insured," Carnahan said. "Even if they're not insured, the entire population will get some type of treatment."

The initiative kicks in from the moment of arrest, with a law enforcement officer or detention facility staff member identifying a possible need for mental health intervention. If accepted into the program after the initial screening by Harbor House staff, the defendants are then offered signature bonds to get out of jail as long as they agree to abide by the terms of the treatment program.

"They will be out in the free world, and in all likelihood their cases will eventually end up going away," Carnahan said. "We will dismiss the charges at the end if they're still getting the care that the treatment provider recommends. We also understand that there are some conditions that we can't help because the treatment is just not there. And there are some people who don't want to participate."

"The one place that I know mental health issues don't belong is in our jails," Ryals said. "We have a lot of help through Judge Carnahan and [20th Judicial Circuit Judge Troy] Braswell with the different things that can be implemented through our court. We support this program 1,000%. We want to do everything we can to help promote it and to accommodate it."

The majority of the county's deputies have received extensive training in identifying mental health issues, Ryals said, and the new program will offer another tool for his officers to use.

"When we bring them to jail, our deputies are cognizant of looking for any kinds of issues that this guy may need to be referred to the new program," Ryals said.

Harbor House, which is located in Conway and other cities around the state, will also review the district court roster for misdemeanor arrests and approach the defendants to ask whether they want to be screened for the program.

Kasey Wilson, drug counselor and recovery coach for Harbor House, said the program in Carnahan's court is different from similar initiatives in other cities around the state. The other programs, like one in Fort Smith, do not begin at arrest, but only after the defendants enter the courtroom.

"Judge Carnahan is doing things a little different here," Wilson said. "I think it's going to have a bigger impact doing it from the moment of arrest. We're using a carrot instead of punishment. We're telling them if they're willing to invest in themselves and get going toward recovery, they will benefit from that in their court case. It's a bigger light at the end of the tunnel for them."

The similar community diversion program began in Fort Smith in the fall of 2018. Wilson said it has had a direct effect on the percentage of those defendants who re-offend.

Three months after the end of the program, only 5% re-offend, Wilson said. After six months, that number goes to 8%, and after 12 months it rises to 15%.

"The benefits of the program goes beyond low recidivism rates to having a direct impact on the jail overcrowding issue," Wilson said. "We have alternatives and reconnecting them to those resources."

Those who do not abide by the terms of the program may be returned to jail or charged with contempt of court, Carnahan said.

"This program does not affect the potential punishment if a defendant is found guilty, because I believe that competent people are responsible for their actions," Carnahan said. "It does mean that we are addressing mental health while aiding Sheriff Ryals with overcrowding based solely on a pretrial accusation."

Carnahan will hold a monthly review with his clerks to evaluate the participants' progress. The review will be fully compliant with the Health Insurance Portability and Accountability Act, he said.

Carnahan said he will review the program regularly and give it "up to a year" to determine if it is getting the desired results.

"Success to me will mean that a significant proportion of the people who agree to do the signature bond are getting the pathway to treatment," he said. "At the end of the day, it's still on the defendant. They have to take their medication. They have to be responsible. If they're not, there are other places they need to be."