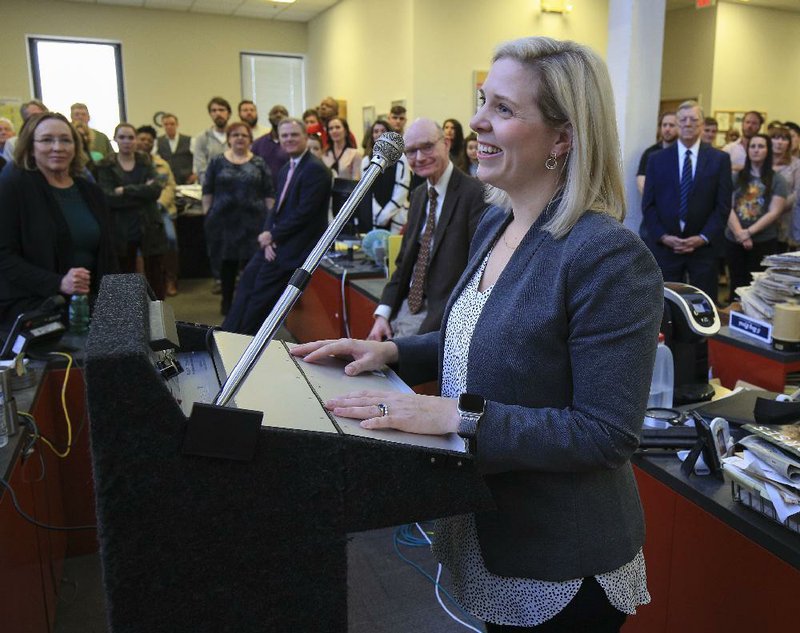 Eliza Gaines, vice president of audience development for WEHCO Media, speaks to Arkansas Democrat-Gazette employees Monday after being introduced as the next managing editor of the newspaper, succeeding David Bailey, who is retiring. More photos at arkansasonline.com/128editor/.

Eliza Gaines will be the next managing editor of the Arkansas Democrat-Gazette, succeeding David Bailey, who is retiring effective March 16.

Publisher Walter E. Hussman Jr. on Monday announced the changes in back-to-back announcements, about 30 minutes apart, in the newsroom.

Gaines, 32, has been WEHCO Media's vice president of audience development, serving the Democrat-Gazette and other newspapers operated by the company. She's the first woman to lead the newspaper, which was founded in 1878.

Gaines has been a fundamental part of the newspaper's two-year effort to convert from a print edition to a digital replica, Hussman said, calling the idea "a huge risk to save the newspaper." It has been successful so far, he said.

Gaines said a challenge will be getting new readers, especially younger ones, to subscribe to the newspaper's digital replica.

She is Hussman's daughter and the fourth generation of the Hussman family to be in the newspaper business. She is a former editor of the Sentinel-Record in Hot Springs. Gaines was a travel reporter for the San Francisco Chronicle before earning a master's degree in journalism in 2012 from the University of North Carolina.

[Video not showing up above? Click here to watch » https://www.youtube.com/watch?v=ScvaEJTIYx8]

"I'm excited to get started," Gaines said in brief remarks to a newsroom filled with employees of every department.

During the announcement for Bailey, Hussman said, "The best thing that can happen to a publisher is to have a really good editor."

Hussman said Bailey has been one of those, and he's only the fourth top editor in the 47 years since Hussman has been publisher of the newspaper. "I feel really fortunate," Hussman said.

Bailey, 70, has been the newsroom's top editor since the May 2012 resignation of Griffin Smith Jr. Smith's position as executive editor was never filled.

Bailey, managing editor since December 1998, came to the newspaper in 1993 as assistant city editor. He was named city editor in February 1994 and was placed in charge of day-to-day local news coverage.

Bailey said he had intended to stay just one year.

"The journalism was good, and the people I worked with were even better," he said.

Known throughout the newsroom for his preference for a warmer climate, Bailey said he and his wife, Twyla, eventually will move to the Gulf Coast, where they own a condominium and spend much of their vacation time.

In 2009, the Arkansas Press Association presented Bailey with its Freedom of Information Award for his defense of the state's open-records law. Bailey testified frequently before legislative committees that year on behalf of media organizations and other open-records advocates. He won a similar press association award in 2019.

Bailey was instrumental in the newspaper's decision to dispatch a reporter, from March 2004 to March 2005, to cover the war in Iraq. He also dispatched a team of four reporters and photographers to cover Hurricane Katrina's approach, and first days of damage, along the Gulf Coast and in New Orleans in 2005. Ultimately, a staff of 13 covered the initial devastation and after-effects for more than a month.

Gaines, along with her father, has been active in the Democrat-Gazette's effort the past two years to convert to digital.

Home delivery of the Monday-Saturday editions of the newspaper officially ended Saturday.

With print advertising dwindling nationwide over the past 15 years, converting to digital was a must-do, Hussman has told numerous civic groups and other gatherings in the 63 counties that the Democrat-Gazette covers.

Some 79% of subscribers have switched to the digital plan, many of whom have taken up the newspaper's offer of a free iPad for as long as their subscriptions are intact. Most of those subscribers will continue receiving the Sunday print edition. (Print delivery to northeast Arkansas was eliminated during the first part of the conversion effort, when newspaper executives were tweaking ideas for what would work best.)

The newspaper will continue printing weekday and weekend editions for single-copy sales, mostly in Pulaski County. 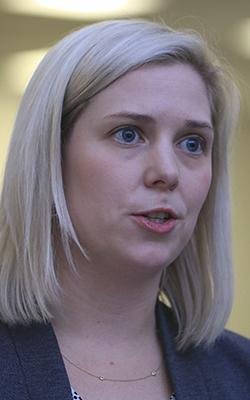 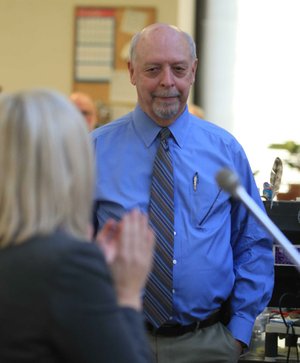