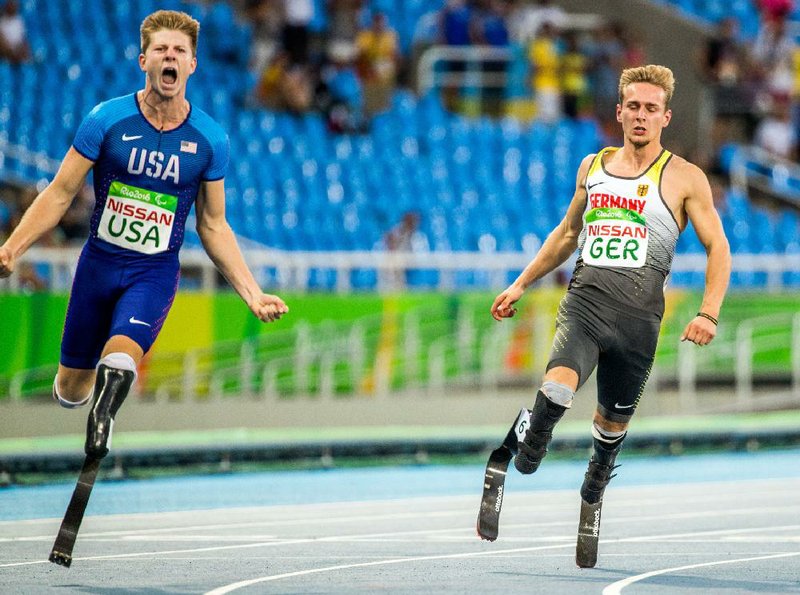 A University of Arkansas, Fayetteville runner appeared Monday on The Ellen DeGeneres Show and received $20,000 aimed at helping him get to the 2020 Paralympic Games.

Hunter Woodhall, a sprinter from Syracuse, Utah, signed with UA in 2017. As a double amputee, he runs using prosthetic legs and competes for the university alongside runners without disabilities.

On the world stage, he won two medals in the 2016 Paralympics and is hoping to make the 2020 team.

“That was kind of the pinnacle, the payoff, to all that hard work I’d been put into before,” Woodhall told DeGeneres of competing in the 2016 games. “I was actually able to win a silver and a bronze medal for my country, which is amazing.”

Woodhall was born with fibular hemimelia, a congenital bone deficiency that prevents both fibulas — the calf bones — to form.

After doctors told Woodhall's parents he wouldn't be able to walk on two legs, the decision was made to amputate both limbs below the knee when he was 11 months old. He received his first prosthetic legs a few months later.

Woodhall has gained a massive following across social media platforms. He has more than 102,000 followers on Instagram and 1 million followers on TikTok. At least one of his videos on the platform has over 6 million views.

DeGeneres asked him to make a couple TikTok videos on the show, and during the second gave him the check for $20,000.

The pair discussed on the show the bias some people feel toward Woodhall for competing using prosthetic legs.

In 2015, an NCAA committee overseeing the sport ruled athletes with prosthetics do not have an advantage over the rest of the field based on research by Alena Grabowski, a physiology assistant professor at the University of Colorado, which showed amputee athletes cannot push off the ground with as much force as athletes without disabilities.

Still, Woodhall said he receives negative comments and hopes to show people he’s not a person or athlete with a disability but that he is an athlete, period.