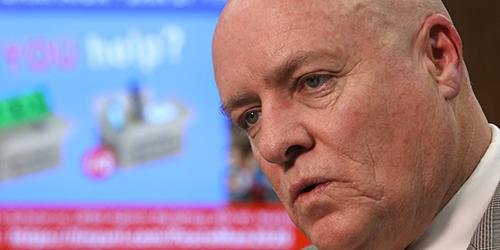 Little Rock School District Superintendent Mike Poore talks about the status of the district Tuesday during a news conference to roll out his annual Poore Man on the Roof event. More photos at arkansasonline.com/129district/. (Arkansas Democrat-Gazette/John Sykes Jr.)

Arkansas Education Secretary Johnny Key on Tuesday said the fifth anniversary of the state's assuming control of the Little Rock School District is a day to note successes and new opportunities in the 23,000-student system.

Key, who serves in place of the school board in the state-controlled district, acknowledged that some people wore black Tuesday to protest the state Board of Education's Jan. 28, 2015, vote to dismiss the elected school board and place the superintendent under state direction. That was because six of the district's then 48 schools were labeled by the state as academically distressed for chronically low student-test results.

"I would submit that we can look it as a day of celebration because there has been a lot of progress in the district," Key said in an interview, adding that the day creates an opportunity to "look at the wheels and how they are in motion for that return to local control."

The Arkansas Board of Education voted in September to authorize the election this November of a nine-member school board to oversee the capital city district, but that board will be prohibited from reinstating collective bargaining with the employee union, filing lawsuits or changing the superintendent. The restrictions are to remain in place until the district meets criteria to exit the category of Level 5 -- in need of intensive support -- in the state's school accountability system.

"Yes, there are limitations on the board's authority but, as soon as the exit criteria are met, those restrictions will be removed," Key said.

"In every other area of decision making -- when this board is elected in November, they will have that authority that covers almost everything in the day-to-day operations of a school district," he said. "It's important to just keep reminding citizens that their opportunity to move to a locally elected board is coming; their opportunity to maybe even run for those positions is coming in the next several weeks, and we are looking forward to that time when that board is in place."

Key said that forthcoming revisions in the current Level 5 exit criteria -- possibly as soon as March -- are likely to center not on the A-F letter grades applied to individual schools based largely on state test results, but on districtwide accomplishments. Those might include carrying out a new literacy program and implementing special magnet programs at area high schools, he said.

Key highlighted new school buildings -- including a state-of-the-art high school -- as well as expanded high school course offerings and increases to teacher salaries as some of the improvements in the district. He also noted teacher and principal evaluation systems, and student and financial record-keeping systems, that are now consistent with those used throughout the state.

"There are greater opportunities for students in this district than there were five years ago," Key said. "When you roll into the next school year and you see the offerings that we have from a magnet standpoint, from a new facilities standpoint, and all the changes that [Superintendent Mike] Poore and his team are bringing to bear in the district, the students are going to be well-served far into the future."

The education secretary's remarks came the day after the Little Rock Education Association employee union membership met to explore options for continuing to oppose state Education Board decisions made about the district and its employees. In dispute are the restrictions planned for a newly elected board, the formation of a 40-plus member Personnel Policy Committee and the recent resolution proposed by Poore and approved by Key that put employees at four schools in jeopardy of getting job non-renewal notices in April if they don't line up other jobs at other campuses within the district by that time. Three schools are closing down, and the fourth -- Hall High -- is being converted to a districtwide magnet school with a science, math, art and technology focus.

Association President Teresa Gordon described the members at the Monday night meeting as angry and hurt, and she predicted that further action by the employees was likely. Gordon led some teachers and other district employees in a one-day strike in November.

Poore -- like Key -- said Tuesday that the Little Rock district is better off now than it was five years ago in terms of facilities, academic achievement and academic choices.

In response to questions, he said the district remains prepared for employee job action, which includes elevated pay for substitutes who work on a employee strike day. He also said an employee job action would be counterproductive to the goal of exiting Level 5 of the accountability system and getting release from the restrictions placed on the new school board.

"My hope is there will be no form of a work stoppage because, first, every day in school matters for kids," he said.

Second, he said, the district can control its destiny.

"One of the quickest ways for us to eliminate the controls that many are upset about -- that the state has set up -- is for us to get out of Level 5," he said. "The best way to get out of Level 5 is to be together and work and get all of the talents that are available with our staff, our community and our kids working to have a successful end of the year. If we do that, we are going to get out of Level 5. You can see so many things that we're doing -- we're on the verge of having everything start to click and move us into the place where we move out of Level 5."

Poore was asked about the five-year anniversary of the state takeover at a news conference in which he promoted the fourth annual drive for nonperishable food items, personal hygiene items and money from the public to go to Watershed agency and Bright Futures student support program. Poore will work from the roof of his 810 W. Markham St. office on Feb. 7 if the members of the public fill his office with the donated items.

Tuesday also marked the first meeting of the district's new personnel policy committee for state licensed educators, made up of one elected representative from each of the district's more than 40 schools. The committee, required for all districts by state law, gives advice to school boards and district administrators on employee-related matters, including compensation. The Little Rock district was previously exempt from the requirement because it engaged in collective bargaining with the Little Rock Education Association. The Arkansas Education Board voted last fall to end union recognition as the contract bargaining agent in the Little Rock district.

At the first meeting of the committee, nearly every participant was dressed in black in a planned show of opposition to the state control.