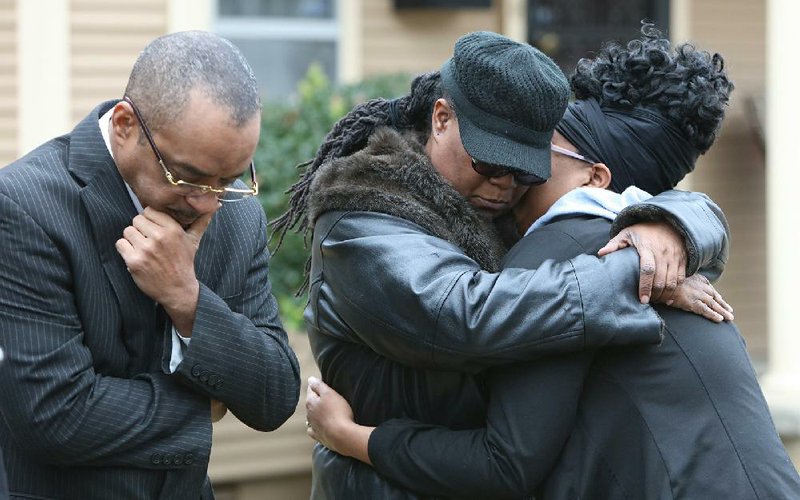 Erika Richardson described her younger sister as a "free spirit" who was always the life of the party. She can't imagine why anyone would have harmed her.

Police had not identified any suspects in the case as of Tuesday evening.

[Video not showing up above? Click here to watch » https://www.youtube.com/watch?v=EqoLE15qebo]

"I'm just as lost as they are," Richardson said Tuesday.

Richardson, 32, said her sister had a life all her own and she isn't familiar with the company her sibling kept, although she is sure someone knows who the killer is.

"I know my sister was a good person, and whoever did this to her was jealous," Richardson said.

Richardson and her mother returned to the house at 3112 S. Ringo St. on Tuesday for a news conference led by activist Benny Johnson, president of Arkansas Stop the Violence. Johnson and other community leaders, including Ward 2 City Director Ken Richardson, called for anyone with information about the crime to step forward.

"It could be a person on this corner, a black man on this corner, and he gets shot and there are 100 people out there, and not one of the 100 has seen anything," Johnson said. "It just doesn't make any sense, and we're just asking and we're begging, we're pleading, please turn this monster or monsters in."

A toddler who was in the home with the two women and an unidentified 15-year-old girl also were injured in the shooting Saturday. Richardson said the toddler is her cousin's son. She said the boy, who turned 3 on Monday, was doing better and "running around."

Earl Williams, with the support and advocacy organization Parents of Murdered Children, lamented that certain areas of the city -- particularly west Little Rock -- seem to receive more attention than others when crimes occur.

"But here, there's trouble all the time," said Williams, who had three sons who were homicide victims. "You hear gunshots day and night. I was just in the park last year, and a guy just starts shooting, just for no reason, just shooting.

"They need to patrol these areas like they patrol the other areas. I mean, our lives matter, too." 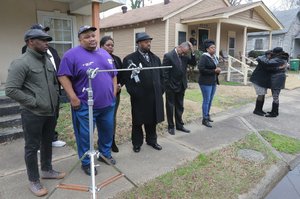 Lakeshia Smith and Jacquelyn Tate (right), mother of Brittany Dunyae Tate, embrace at a Tuesday news conference on South Ringo Street, near where Brittany was killed. Members of Arkansas Stop the Violence, including Benny Johnson (second from left), and the Central Arkansas Chapter of Parents of Murdered Children attended the news conference. More photos at arkansasonline.com/129victims/. (Arkansas Democrat-Gazette/John Sykes Jr.)